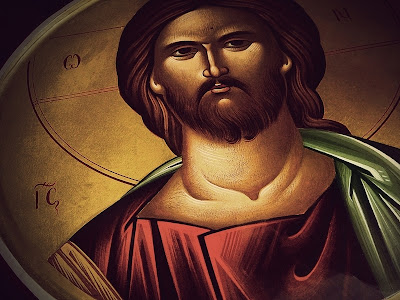 source: Enlarging the Heart blog
Irenaeus of Lyons: The Outpouring of the Holy Spirit and the Restoration of the Image of God

By the hands of the Father, that is, by the Son and the Holy Spirit, man, and not merely a part of man, was made in the likeness of God.

Now the soul and the spirit are certainly a part of the man, but certainly not the man; for the perfect man consists in the commingling and the union of the soul receiving the spirit of the Father, and the admixture of that fleshly nature which was moulded after the image of God.

[...] When the spirit here blended with the soul is united to God’s handiwork, the man is rendered spiritual and perfect because of the outpouring of the Spirit, and this is he who was made in the image and likeness of God.

But if the Spirit be wanting to the soul, he who is such is indeed of an animal nature, and being left carnal, shall be an imperfect being, possessing indeed the image of God in his formation, but not receiving the similitude through the Spirit; and thus is this being imperfect.

And for this cause does the apostle, explaining himself, make it clear that the saved man is a complete man as well as a spiritual man; saying thus in the first Epistle to the Thessalonians: “Now the God of peace sanctify you perfect; and may your spirit, and soul, and body be preserved whole without complaint to the coming of the Lord Jesus Christ.”

Now what was his object in praying that these three — that is, soul, body, and spirit — might be preserved to the coming of the Lord, unless he was aware of the [future] reintegration and union of the three, and that they should be heirs of one and the same salvation? For this cause also he declares that those are “the perfect” who present unto the Lord the three component parts without offence.

Those, then, are the perfect who have had the Spirit of God remaining in them, and have preserved their souls and bodies blameless, holding fast the faith of God, that is, that faith which is directed towards God, and maintaining righteous dealings with respect to their neighbours. 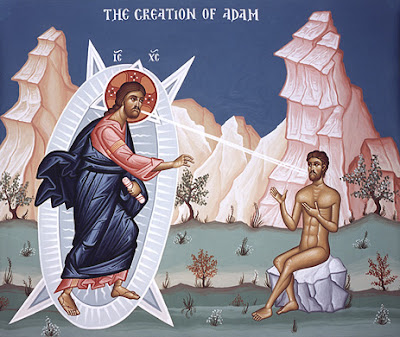 1 the perfect man consists in the commingling and the union of the soul receiving the spirit of the Father, and the admixture of that fleshly nature which was moulded after the image of God..

In Genesis, Adam was moulded out of mud on which God then breathed.   Alone among the animals was this reception of God's breath.   The human being is mud, (a product of the meterial world), that is living, (has a soul) on which God breathed, ("breath" and "spirit" being the same word in Hebrew).   In Christian Tradition, the human being is not just a soul living in a body, as some Platonists believe; nor is he just a body that works, as is believed by materialists; nor is he simply one living being among others, as Buddha believed and as some deduce from Evolution.  The human being is a living en-souled being, one of whose essential dimensions is openness to the eternal, to God, (he has "spirit")   Karl Rahner defined the human being as "capax Dei".   If any of these three dimensions, body, soul and spirit, is not functioning properly, the human being is sick, sick in his nature, because it is natural for the human being to share in God's life.   For us to be fully human, God needs to continue to breath on us his Holy Spirit as he did with Adam.   Separation from God is unnatural for the human being, because he needs the free gift of union with God to be - in the words of St Irenaeus - fully alive: to be healthy, we, alone among the animals, need God.

"The glory of God is a human being fully alive; and to be alive consists in beholding God.