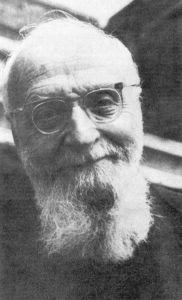 Fr. Lev Gillet
Archimandrite Lev Gillet, who signed many of his books “A Monk of the Eastern Church,” was one of the great Orthodox spiritual guides of the last century. His biography, written by his longtime friend Mme. Elisabeth Behr-Sigel, has been translated into English and offers invaluable insight into the life of Fr Lev, as well as of the circumstances surrounding the growth of Orthodox Christianity in Western Europe, especially following the Russian Revolution.

In 1990, St. Vladimir’s Seminary published two essays of Fr Lev in a volume titled Serve the Lord With Gladness. The first, “Our Life in the Liturgy,” is a simple and highly accessible introduction to the Orthodox Divine Liturgy or Eucharistic service. The second, “Be My Priest,” is a profound meditation on the significance of the priesthood, which appeals to both ordained clergy and others who make up the “universal priesthood” of baptised believers.

In this series of webpage columns dedicated to “Life in Christ,” we will be offering occasional translations of chapters from another of Fr Lev’s books, Amour Sans Limites (Love Without Limits), published in 1971 by “Éditions de Chevetogne,” a Roman Catholic monastery in Belgium (where the monks celebrate both Western and Byzantine rites). It is difficult to render Fr Lev’s lyrical French into English, but we hope that these efforts will provide readers with something of the spiritual richness and profound theological insight that characterized this humble monk, who was truly a modern Father of the Church.

“To You, Whoever You May Be”

Whoever you are, whatever you may be, says the Lord of Love, my hand is resting upon you at this very moment. By this gesture, I am letting you know that I love you and that I call you for my own.

Often you did not hear this call, because you were not listening. At other times you perceived it, but in a way that was vague and confused. Occasionally you were at the point of responding with acceptance. And sometimes you gave me that response without any lasting commitment. You were deeply moved to hear me. You recoiled from the decision to follow me.

Never thereafter did you finally submit, totally and exclusively, to the calling of Love.

Yet now, once again, I come to you. I want to speak to you once more. I want you wholly for myself. Let me repeat: Love desires you, totally and exclusively.

I will speak to you in secret, confidentially, intimately. I will place my mouth close to your ear. Hear, then, what my lips want to speak to you in hushed tones – what they want to murmur to you.

I am your Lord, the Lord of Love. Do you want to enter into the life of Love?

This is not an invitation to some realm of tepid tenderness. It is a calling to enter into the burning flame of Love. There alone is true conversion: conversion to incandescent Love.

Then hear what my Love speaks to you.

Awake from this sleep and its bad dreams! In certain moments of truth, you see nothing in yourself but failures and defeats, set-backs, corruption, and perhaps even crimes. But none of that is really of you. It is not your true “me,” the most profound expression of your true self.

Beneath and behind all that, deeper than all your sin, transgressions and lacks, my eyes are upon you. I see you, and I love you. It is you that I love. It’s not the evil you do – the evil that we can neither ignore nor deny nor lessen (is black actually white?). But underneath it all, at a greater depth, I see something else that is still very much alive.

The masks you wear, the disguises you adopt might well hide you from the eyes of others – and even from your own eyes. But they cannot hide you from me. I pursue you even there where no one has ever pursued you before.

Your deceptive expression, your feverish quest for excitement, your hard and avaricious heart – all of that I separate from you. I cut it away and cast it far off from you.

Become visibly, then, what you already are in my mind. Be the ultimate reality of yourself. Realize all the potential I have placed within you.

No man or woman is capable of realizing any inner beauty that is not equally present within you. There is no divine gift toward which you cannot aspire. Indeed, you will receive all those gifts together, if you truly love, with me and in me.

"Fire burst forth from the burning bush, yet the bush was not destroyed. Draw near to the Burning Bush, my child. Reflect on this great vision, and why the bush burned and still was not consumed.


"The fire that burns the bush without destroying it is a fire nourished by nothing apart from itself. It subsists alone, by itself. And of itself it spreads abroad in infinite growth. This fire does not destroy the wood of the bush. Rather, it purifies the wood. It eliminates everything in the wood that is merely brambles and thorns. Yet it does not deform the bush. It respects its original structure, even while it eliminates its superfluous growth. It renews without killing. It transforms the wood itself into fire, a lasting fire.


"Surely, according to the most simple, the most elementary interpretation, you can behold in the Burning Bush the expression of divine protection, which sustains your existence in the face of every burning pain and suffering. There, my child, you can find the assurance of a supreme Compassion, a preserving Mercy. There you can see as well the sign of a divine Purification: one painful for you to endure, yet one that sets you free.


"The Burning Bush, however, has a still deeper meaning. It bears a Revelation of your Lord and God Himself.


"The Burning Bush is an expression of the divine nature. In the flame of the bush you can have a glimpse of Who I am. As the Scripture declares, your Lord, the Lord of Love, is a consuming fire!


"Like the flame of the Bush, I am Love that gives endlessly of itself. I am that generosity that knows no bounds. No one can say of my Love: it extends to this point, and no further.


"I am that Love that always tends to incorporate and assimilate every element of human existence it encounters (indeed, I am the very Source of those elements). Just as the fire burns without consuming the wood of the bush, I never destroy the persons I have created. I only wish to make disappear whatever there is within a person that conflicts with the essence of Love.


"I take for myself and make it my own. I transform and I transfigure. I bestow life. I transpose human life on to a higher plane.


"He who loves unites himself to those whom he loves. I unite myself to you, my beloved. Nevertheless, there can be no confusion between myself, who am Love, and you, who receive that Love.


The above are two who were Protestants who became Orthodox. Many have become Catholics for the same reasons. We all need each other.  Unfortunately, in an otherwise wonderful testimony to the Truth, Fr Seraphim's rhetorical question about where are there heroes in Western Christianity shows a certain blindness.   Starting with Russia, Baptists suffered martyrdom along with Orthodox.   In the Ukraine, there were many Orthodox martyrs, but the Ukrainian Greek Catholics suffered even more than the Orthodox, and they were imprisoned in the same gulags as the Orthodox and enjoyed a communion of suffering with them.  In the Middle East, Catholics and Orthodox suffer together right now.  Of course, we in the West have not suffered since the fall of the Nazis, but, for example, in the "White Rose" group, the Germans executed Christian heroes who were Catholic, Lutheran and Orthodox, including the Orthodox saint, Alexander Schmorell     May God preserve all of us, Catholics, Orthodox and Protestants from our own blindness about each other!!


Here is another video about Orthodoxy. If, like me, you are Catholic, then put "Catholic" wherever they say "Orthodox", you will discover how close we are to each other.  In fact, the schism is obscene.