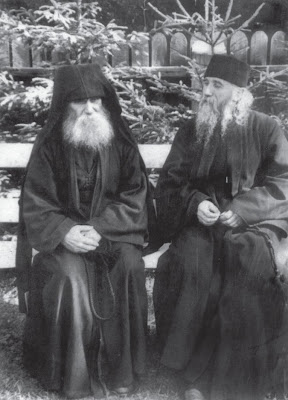 Elder Paisius (Olaru) with Elder Cleopa (Ilie) on right.
The great renown of the Romanian elder Paisius (Olaru) (1897– 1990) resulted paradoxically from his struggle to live in obscurity: in meekness, simplicity, and humility. As one writer has stated, “One cannot say precisely what the specific gift of Fr. Paisius is. He does not work miracles. He does not preach; no one has heard him preach in church. Neither is he a good chanter; as a celebrant he is not gifted…. And yet, he has something which captivates. He has grace.”1 And this grace attracted thousands of the faithful to flock to him for counsel and comfort. His direct and unembellished teachings strengthened Romanians, including many of the country’s great spiritual fathers, during the dark years of Communism.

Fr. Paisius was born on June 20, 1897 in the Romanian village of Stroesti and was baptized with the name Peter. He grew up in a pious family in the region of Bucovina, renowned for the deeply rooted piety of its people. His father, John, was a forester and provided a comfortable life for his wife Catherine and five children. John Olaru was well known for his honesty, and the local men would often seek his counsel. His youngest child, Peter, was sent to the village school, where he completed the three grades available. In his youth, Peter was deeply moved with love for the monastic life through reading the Lives of the Saints. He was particularly affected by the Life of St. Sabbas the Sanctified. Peter served in the First World War and was at the front in Hungary.

In 1921 he was released from the army and entered a monastery close to his home village, Cozancea Skete. According to Elder Cleopa (Ilie), “The monks loved him greatly because he took care of all the sick and the elderly with complete love —visiting their cells, taking them food, bringing the priest to commune them, and staying by their side at the hour of death.”

He was tonsured a monk at the age of twenty-five and given the name Paisius. After becoming a monk, he visited the monasteries in the Neamts region, and at that time conceived the desire to become a desert-dweller in the Carpathian Mountains. Once, while praying in a meadow a few hundred yards from Cozancea Skete, he heard a heavenly choir beautifully singing church hymns. With a blessing from the Metropolitan of Moldavia, at the spot he built a chapel dedicated to the Holy Great-martyr Menas and, later on, cells.

During the day he carried out his obediences in the monastery— working in the church, the vineyard, and the garden—and at night he withdrew to his place of solitude. Fr. Paisius lived there for eighteen years as a simple monk. He was clothed in the great schema in 1933 at the age of thirty-six with the intention ofwithdrawing further into solitude. Fr. Paisius was ordained a deacon in 1943 and a priest in 1947. When he was ordained to the priesthood, he was also appointed abbot of Cozancea Skete. Due to some misunderstandings in the community, he was abbot for only six months. 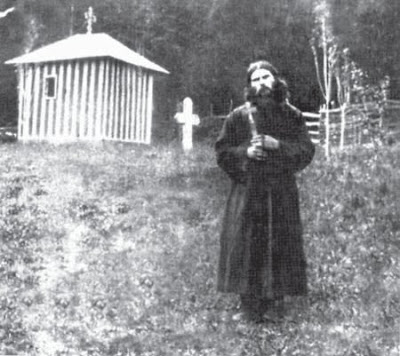 In 1948 Fr. Paisius requested a blessing to move to Sihăstria Skete. Fr. Cleopa was then the abbot of Sihăstria, and went himself to Iasi to request this transfer before the bishop, and it was granted. Fr. Cleopa appointed Fr. Paisius to be the confessor both for the monks and for the faithful who would visit Sihăstria Skete. In August of 1949, Fr. Paisius and about thirty other monks moved with Abbot Cleopa to Slatina Monastery, where he continued to be the confessor for the community. During this time he lived for six months at Rarău Skete, a dependency of Slatina Monastery, before returning to Sihăstria Skete in about 1953. He considered these years at Sihăstria to be the most fruitful period of his life.

According to Elder Cleopa, “Next to silence, he greatly loved his spiritual children, whom he would receive for Confession at any hour of the day or night, and for whose salvation he took great care. He was not very harsh in applying the canons, for he kept account of the spiritual state of each one.… With his forgiveness, his patience, and his meekness, he won many thousands of souls, sacrificing himself for others.”

With the desire for greater quiet and solitude, Fr. Paisius moved to Sihla Skete, a dependency of Sihăstria, in 1972. However, great numbers of people made the effort to ascend the mountain to Sihla in order to receive his blessing and counsel. In 1985, due to illness, he moved back down to Sihăstria, where he could more easily receive care. He was confined to bed from September 1986 until his repose, still receiving and blessing those who came to him, though to a much lesser degree than before. At dawn, on October 18, 1990 at the age of ninety-three, Fr. Paisius reposed in the Lord, and on October 20 he was buried in the cemetery at Sihăstria.