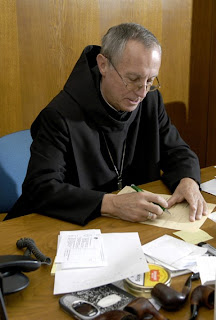 Peace reigns in Sant'Anselmo. The academic year ended on 29th June. The professors and students left for the holidays. P. Juan Javier Flores, the new Rector has taken up office and the new Prior, Fr Elias Lorenzo is learning Italian. Here only a small group remains to keep things going during the Summer heat. Our building- and renovation-projects continue: roofs, the installation of an internet system throughout the house, a new electrical plant and, not least, planning of the new aula. All of these matters were gone through once again at the joint meeting in June of my Council and the Finance Commission for Sant'Anselmo.

At the beginning of July I was in China and North Korea. In North Korea I signed a contract for the establishment of an out-patients clinic at our hospital. I have postponed until next year a journey planned for the first half of August. This will give me the chance to rest a little, to replenish my resources and deal with the mound of correspondence that has accumulated. Even though I spend the whole day at my desk I find time in the evening for a few lengths of the swimming-pool.

I am writing this letter mainly to make up for a major omission in my last letter. When drawing up the list of topics to be mentioned in a letter one always forgets something no matter how careful one is. I am sorry about this but to err is human. I am referring to the canonisation on 26th April last of St. Bernard Tolomei, the founder of Monte Oliveto and with it of the Olivetan Benedictine Congregation. During a time of monastic renewal St. Bernard Tolomei withdrew with his companions from Sienna to Monte Oliveto in the year 1313 and founded his community based on the Rule of St. Benedict. He died of the plague which he contracted through his self-sacrificing service of those stricken with this disease. His canonisaiton was long overdue given the great deal of good done in the Church throughout the centuries by his foundation, now spread beyond Europe to America, Africa and Asia. I am thinking too of the many Olivetan women who work most fruitfully in Switzerland and in South Korea. Even in China it has been possible to re-establish the former community at Yanji. It is really astonishing what one man, who wants to follow Christ and can inspire others to do so, can achieve over the centuries. Our congratulations are due to Abbot General Michelangelo Tiribilli, his community and Congregation and to all Olivetan women, on this canonisation which also reflects some of its glory on the wider Benedictine family. At the end of the canonisation the Holy Father said that the Benedictine life is of great significance for the Church. Let us hope that our other Benedictine beati will be recognised by the Universal Church by being canonised.

There is a second matter to which I should like to refer. For many years we have had excellent contacts and a spiritual dialogue with Buddhist monks and monasteries. In the past 30 years our group DID-MID has done much to foster mutual understanding and esteem. In the meantime Islam throught the world is becoming ever stronger and more self-conscious. We cannot close our eyes to this reality. This dialogue has become very important for the Holy Father. Some time ago I asked Dom Timothy Wright, the former Abbot of Ampleforth, on the basis of his earlier experiences with Iranian theologians, to investigate what is already happening on our side in the matter of Christian-Islamic dialogue and how we can help this. The DIM-MID group will discuss this at their annual meeting at the end of August in Trondheim in Norway. With this letter I am enclosing a letter from Abbot Timothy which includes a short questionnaire. I am aware that very few questionnaires have any chance of being answered but I should be most grateful if you could send some answers to Fr William Skudlarek, the General Secretary of DIM. His address is printed on the questionnaire.

In the last week of September I shall be at the annual Synod of Abbots President which is being held at the Abbey of Waegwan in South Korea. Waegwan is celebrating the 100th anniversary of Benedictine presence in Korea as well as the dedication of the new monastery which replaces the one that was largely destroyed by fire in the night from Holy Thursday to Good Friday, 2007. Our Benedictine history is closely linked with that of the Korean Church and the fortunes of the Korean people. However, we will be missing one familar face: Abbot Clemens Lashofer of Göttweig, who since 1982 as Abbot President of the Austrian Congregation, shared responsibility for the Confederation and for Sant'Anselmo. On 21st July in the presence of 45 abbots and a score of bishops he was laid to rest. His motto was, 'Obviam Christo Domino – to meet Christ the Lord'. May Christ fulfill his hope.

Today is the Feast of the Transfiguration. This is deeply monastic feast: the transfigured Christ who lives among us. We can too easily forget this in the cares of everyday living. May our gaze constantly be opened to this reality. The transfigured Christ is now living among us. He strengthens our following of him, he is our goal and our hope.

I fraternal union and with heartfelt greetings from a warm and sunny Rome,

Your browser may not support display of this image.

Feast of the Transfiguration
Posted by Father David Bird O.S.B. at 16:52

Email ThisBlogThis!Share to TwitterShare to FacebookShare to Pinterest
Labels: On the canonization of St Bernard Tolomei and other Benedictine news


Just saying hello while I read through the posts


hopefully this is just what im looking for, looks like i have a lot to read.


hopefully this is just what im looking for, looks like i have a lot to read Im trying to find a way to build an e-mail list.

Nice content. Waiting for you to continue the topic.

Well that is really interesting, thanks for sharing that!
Best Vacuum
http://smallvacuumcleaners.net/

i am new here

just wana say hi to all

Thank You for being the member of this website. Please allow me to have the opportunity to show my satisfaction with Hostgator web hosting. They have professional and fast support and they also offering numerous [url=http://www.aboutus.org/HostingHostGatorCoupons.com ]Host gator coupons[/url].

Hi, I think your website might be having browser compatibility issues. When I look at your website in Safari, it looks fine but when opening in Internet Explorer, it has some overlapping. I just wanted to give you a quick heads up! Other then that, superb blog!

Just wish to say your article is as surprising. The clarity on your put up is just spectacular and i could suppose you're a professional in this subject. Fine together with your permission let me to grasp your RSS feed to keep updated with forthcoming post. Thank you a million and please continue the enjoyable work. After study a few of the blog posts on your website now, and I truly like your way of blogging. I bookmarked it to my bookmark website list and will be checking back soon. Pls check out my web site as well and let me know what you think. I absolutely liked your blog posting|Your blog post was fantastic and extremely informative.
This article is an example of writing by someone who really cares about their content. I wish I could find more good reading like this online, but not all writers care as much as you. [url=http://www.angvall4rep.com]Replica Chanel[/url] I am not rattling great with English but I find this rattling leisurely to interpret. I am glad to be one of many visitants on this great web site (:, thankyou for posting . Well, I don't know if that is going to work for me, but definitely worked for you! Excellent post! [url=http://www.cheapreplicawatche.co.uk/]Fake watches[/url]

you're actually a excellent webmaster. The website loading velocity is amazing. It kind of feels that you're doing any distinctive trick.

Furthermore, The contents are masterpiece. you've done a great job in this subject!
My website internet business make money online

Heya i am for the primary time here. I found this board and I find It truly useful & it helped
me out a lot. I am hoping to present something back and aid others
like you aided me.

One more premiere of "The Bible" series was shown on the History Channel, March 17. This premiere concluded the Old Testament and introduced the New Testament. So far 6 of the 10 hours of "The Bible" have been completed with only four more hours to be completed in the next 2 episodes.

Although several stories were not shown in the original The Holy Bible, what do you think the television presentation would be like, if it aired the removed stories?
One removed book includes the Testament of Issachar