Peace at the heart of the troubled history of the Maronites 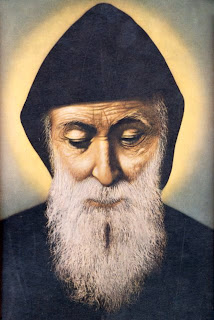 The Consecration in the Aramaic Mass of the Maronites.

From Times Online
April 17, 2009
Peace at the heart of the troubled history of the Maronites
The oldest printing press in the Middle East is hidden in a monastery in the Qadisha Valley
undefined
David Helsten

The earliest reported printing press in the Middle East is hidden within the stone walls of a museum in the valley of Mount Lebanon.

The monastery of St Anthony is also the cradle of Lebanese Maronite Christianity: a branch of Maronite Catholicism that emerged in this rugged terrain of the Zghorta district of Mount Lebanon in the early 5th century.

At that time paganism was rife in the mountainous regions of Lebanon, where Christianity had been introduced by Ibrahim El Kawrachi and St Simeon Stylites, followers of St Maron of Syria, who is considered the founder of Maronite Christianity.

Of the pair, Simeon is the better known and indeed was infamous for living on a platform on top of a pillar (style in Greek). The idea was that this emulated Christ crucified between the heavens and the earth. Simeon and his followers, the Stylites, converted the Becharre region — the birthplace of the poet Khalil Gibran in 1883 — and then the remainder of the Qadisha Valley, site of St Anthony’s.

The monastery took the name of St Anthony of Egypt, the 4th-century Egyptian regarded as the founder of desert monasticism. Hearing one day the Gospel injunction “to sell all thou hast” (Matthew xix, 21), Anthony abandoned his family wealth and ease for a life of asceticism in the desert.

The archives of St Anthony’s contain title deeds for the purchase of land that dates back to AD1179. A papal bull from Pope Innocent III in the year 1215 addressed to Patriarch Jeremiah (Ermiya) al-Amshiti (1199-1230) states that the monastery constituted the first Maronite episcopal see.

The grounds surrounding the monastery are carved with terraced slopes hewn into solid rock. For as far as the eye can see, the once arid ground lies rich with cedar, oak and pine, thanks to centuries of hard work by cave-dwelling hermits and congregations of monks. This ordered scenery, an apparent model of agricultural sustainability, forms the vast Qadisha Valley. Its cultivation reflects Lebanon’s quest for holiness.

For how the monks found eventual prosperity in this secluded spot in the Lebanese mountains does not merely reflect this country’s record for offering sanctuary to persecuted minorities and communities. It is also the story of the emergence and survival of Maronite Christianity.

A key moment was in 451 at the Council of Chalcedon, a place that today lies within the Kadiköy district on the Asian side of the Bosphorus in Istanbul. This groundbreaking council clarified the nature of Christ as being both human and divine.

The Maronites strongly supported the council’s decision, a factor which made them bitter enemes of the Monophysites, who held that Christ had only one nature, which was divine.

To reward the Maronites, Pope Leo I ordered a monastery to be built for the disciples of St Maron on the banks of the Orontes River in Syria. In 452, on the orders of the Byzantine emperor Marcian, the Bet Moroon monastery was duly built there. However, it proved short-lived. In 514, conflicts between Maronites and Monophysites led to the monastery’s destruction. More than 350 monks were killed and the rest were dispersed.

The surviving Maronites informed Pope Hormisdas once more about their struggles, and he described them, in a letter of support, as “martyred soldiers of Jesus Christ”. Next, the Maronites fled the Orontes Valley and Monophysite persecution, taking sanctuary in the Qadisha Valley, where they led ascetic lives, dwelling primarily in the caves. Over the following centuries, further conflicts and persecution followed: at the hands of Crusaders, Mamluks and Ottoman soldiers The Maronites of the Qadisha Valley remained mountain dwellers, and thus became part of a Syro-Aramaic culture that was quite distinct from that of urban Christians shaped by a Graeco-Roman Byzantine civilisation. The deprivation, isolation and seclusion they endured marked the lives and personalities of the first Maronites. In The Qadisha Valley, from the Depths to the Peaks, George Hayek writes: “This valley would not have been called holy if this particular community had not chosen it, during many eras, to be its stronghold and sanctuary against religious persecution and political neglect.”

In the 16th century the first printing press reported in the Middle East was brought to St Anthony’s from Germany by two monks. Today it is preserved in the stone-walled museum on the monastery ground floor and bears an intriguing signature: Thos Long & Co. Engineer Edinburgh.

The printing press has Syriac characters, and the earliest text known to survive from this period is the Book of Psalms, printed in 1610. The text is preserved at the University of the Holy Spirit at Kaslik, outside Beirut.

Other liturgical and religious books printed over the centuries in the monastery include the liturgy, the Epistles, the Breviary and the Martyrology, printed both in Syriac and Karchouni, (Arabic written with the Syriac alphabet). Copies can also be viewed in the monastery museum.

In 1998 the monastery and the Qadisha Valley were inscribed on Unesco’s World Heritage List as one of the oldest monastic foundations in the world.

“This land and our monastery is the identity of the Lebanese people. Without them there is no identity,” says Father Antoine Tahan, the abbot of St Anthony’s and a teacher of music at the University of the Holy Spirit, Kaslik, on Mount Lebanon.

For him, the relevance of the monastic lifestyle and the values of the Maronites remain the same as they have always been: “Common to us all is the love of family and the need of respect toward other people’s faiths,” he explains.

Do the Maronites still have a mission today? “To encourage similarities rather then differences of peoples diverse or conflicting beliefs,” Father Tahan says.

Educated in Montreal, Father Tahan believes in open communication with the various, often conflicting sects of Lebanese society. He has opened the monastery doors to a diversity of political and religious groups including Sunni and Shia Muslims. He says: “We are all brothers. This is a safe place where all are welcome, those who seek refuge from an often troubling and confusing world. It’s a place for reflection, meditation and peace. Where you leave the troubles of the world behind . . . if only for a time.”
Posted by Father David Bird O.S.B. at 13:41

Hi! I've been following your web site for some time now and finally got the courage to go ahead and give you a shout out from Humble Texas! Just wanted to say keep up the excellent work!
My web-site - online games like runescape