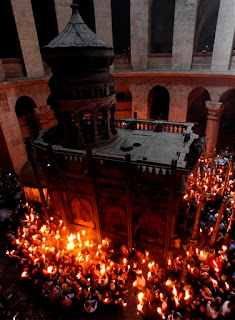 For many these days, the celebration of Easter is centred only around midnight and the ritual lighting of candles from "holy fire" at churches throughout Bulgaria’s cities, towns and villages.

In recent years, there have been live television broadcasts of Bulgarian Orthodox Church senior clergy arriving by special aircraft from Jerusalem, bearing in a special lantern holy fire from the Holy Land.

For those somewhat more devout than those who have only a last-minute engagement with Easter, the run-up to Orthodox Christianity’s holiest day would have begun some time before.

In Bulgarian Orthodox Church tradition, the fast at this time of year begins on Zagovezni, the Sunday six weeks before Easter.
For these 46 days, tradition calls for abstention from all animal products.

Even during this period, there are Bulgarian traditions which owe more to paganism than to any conventional Christian theology; for instance, the belief that if you hear a cuckoo midway through the time of fasting, spring is coming. If you have money in your pocket, you will be rich in the coming year, but if you have no money, or are hungry, then you are set for a year of bad fortune.

On the Sunday before Easter, known as Tsvetnitsa (Palm Sunday) it is allowed for the faithful to eat fish. In villages where such observances remain possible, the day is traditionally celebrated with young girls weaving crowns from willow branches, which they throw into a stream, where further down boys are waiting.

In Sofia and other larger cities, churches open their doors early in the morning on Palm Sunday and willow branches are distributed.
The symbolism of Palm Sunday can easily be linked not just to the resurrection of Jesus, but to that of all of nature.

In Bulgaria, Palm Sunday is often referred to as Vrubnitsa, as a symbol of nature’s resurrection.
Vrubnitsa marks the start of Holy Week, which precedes the great festival of the Resurrection on Easter Sunday, and which consequently is used to commemorate Jesus’s Passion, and the events that immediately led up to it.

Vrubnitsa, which in translation could be termed Flower Day is one of the biggest name days as there are a lot of Bulgarian names derived from flowers, for example: Violeta, Tsvetelina, Lillia, Yavor, Yassen, Roza, Iglika, Latinka, Temenuga, Karamfila, Zdravko, Kameila. Hence the flowers given as Name Day gifts. The branches, traditionally willow, are distributed by churches and are carried, or worn as crowns by girls and women.
Holy Thursday

Those who have missed the egg-painting tradition in the early hours of Holy Thursday, can still do so on Saturday, but not earlier, according to Bulgarian tradition.
Friday in Holy Week is the anniversary of the Crucifixion, the day that Jesus was crucified and died on the cross.
In Bulgarian tradition, the "coffin of Christ" –in reality, generally meaning a table set up in the church – stays for a week in the church and people crawl underneath for health and fertility.

Easter is characterised by certain food and rituals. In Orthodox tradition, these are the sweet bread and dyed eggs. In Bulgaria, Kozunak, the traditional, braided, sweet bread, symbolising the body of Christ, is a necessary item on the Easter table everywhere.

Kozunak is a city culture item, which was introduced to the villages later on. The decorations on top of the bread represent solar symbols and commemorate Christ’s birth.

Easter candles are another symbol of Easter. These are sometimes lit in churches on the eve of Easter Sunday. Some commentators believe that these can be directly linked to the Pagan customs of lighting bonfires at this time of year to welcome the rebirth/resurrection of the sun god.
Many people named after flowers or plants celebrate their name days on Palm Sunday and others called Velichka, Velina, Velika and Veichko have their Name Days on Easter day.

An hour before midnight on Saturday, all churches begin the Easter liturgy. Families and friends go together to church, carrying the coloured eggs with them. When the clock strikes midnight, they greet each other with the words "Hristos vozkrese" ("Christ has risen"). The answer is "Voistina vozkrese" ("He has risen indeed").

They then walk around the church three times with candles in hand, led by the priest. The candles are carried back home.
While still at the church, though, the ever-important egg "fight" (in Bulgarian, "choukane s yaitsa") begins. Similar to the British game of conkers, opponents smash their eggs onto one another. The player whose egg remains intact is proclaimed the winner, or Borak. The winning egg is kept until Easter the following year.

On Sunday, because Lent is over, the tradition is to have a table laden with food, the most important of which is lamb. In Eastern Europe, this is particularly important, as Orthodox believers relate it to the death of Jesus Christ, because a lamb is believed to have been sacrificed in the name of Christ on Resurrection day.
While many Bulgarians will relate the tradition to you in this way, it might also be pointed out that at Passover, Jewish observance included the sacrificial consumption of lamb.

Email ThisBlogThis!Share to TwitterShare to FacebookShare to Pinterest
Labels: Holy Week Customs in Bulgaria (by the staff of the Sophia Echo)