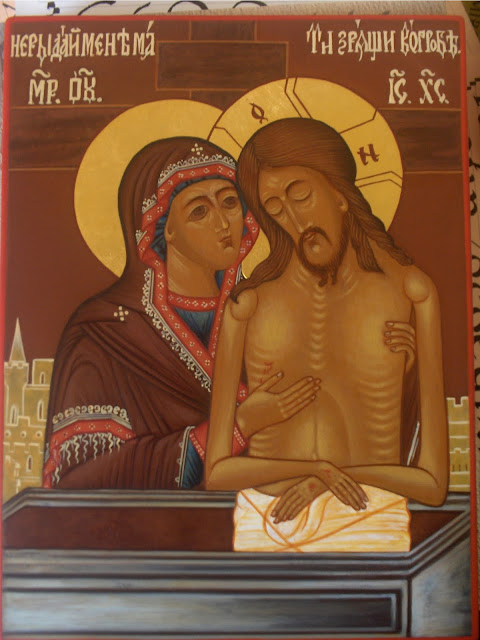 
Just before I returned to England from Peru, I attended a talk given by an Italian priest from Rome who belongs to a movement that is pushing the declaration of a new dogma of Mary, Co-Redemptrix and Mediatrix.   In conversation with him after his talk, one pious lady asked him when this dogma will be proclaimed.   He answered, "Not with the present Pope, he says that there is only one mediator between God and Man, Jesus Christ;" and I thought, "Thank God for that!!"

Yet, in a way, this doctrine is not as bad as it sounds.   If it can be expressed without the words "co-redemptix" and "mediatrix" which verbally contradict scripture and can lead to confusion,  it is an attempt to say something important.

When Jesus was conceived in the womb of the Blessed Virgin Mary, his humanity was united by the Holy Spirit to the whole human race, past, present and to come.   Without this very real union, he could not have borne our sufferings and our sins.   It is an essential dimension of the incarnation: his identity as the Christ is constituted by his relationship to the Father and his relationship with the whole of humanity.

Hence, with her "Behold the handmaid of the Lord!  May it be done to me according to your will," the Holy Spirit came into Mary's womb to form the foetus and, at the same time, went out to all humanity, throughout time and space, to unite us all to him.   Of course, only those who responded to the Spirit with faith would share in the divine life of Jesus by participating in his death and resurrection; but it all began with her consent and the coming down of the Spirit.   Through her consent, the divine and human natures became one in Christ, and through the same consent, we receive the Spirit that makes our participation in Christ's death and resurrection possible.

But the seeds of the Church were already sown in the womb of the Virgin Mary with the incarnation, and she became, by that fact, our Mother.  The basis for our life in the Spirit is what happened in her womb when she consented to God's call.

The best expression of Mary's present role that springs from the Annunciation is this: that just as Jesus Christ in the Spirit is head of the Church and hence is our relationship with the Father, so Mary, in the same Spirit, is the personification of the Church in our/its relationship to Jesus.  I think we should avoid the use of words like co-redemptrix and mediatrix.   Only Jesus is God and a human being in one divine person, which is the very essence of  Christian mediatorship.

There is another reason why I think it wrong to make a dogma.   The whole idea that making such a dogma gives glory to God or to Our Lady is the product of a legalistic image of the Church which seems to see honour in legalistic folmulae for their own sake.   If Mary's position is properly expressed in the liturgical texts, this is where such a formula can give glory to God because it is within the context of the Church's prayer.   To make it a dogma without need is a waste of time, as well as a further and unnecessary  obstacle to Christian unity