With a small group of pilgrims, I arrived today in Moscow, Russia.

Our visit to Ukraine during the past few days was extraordinary.

In the center of Kyiv, Maidan Square, which in the winter of 2013-204 was the scene of protests, speeches, prayers and violence, was sunny, warm, and peaceful.

In the Ukrainian capital, we visited with several Orthodox officials, who received us graciously, and also with His Beatitude Sviatoslav Shevchuk, head of the Ukrainian Greek Catholic Church, who spoke eloquently to us about his longing for a just peace in his country, and his willingness to engage in dialogue to help build the context for such a peace. We bring that message with us to Moscow, where we arrived this evening.

It is cooler here. Red Square and the Kremlin are just next to us. Precisely 100 years ago, Russia was about to enter the great transition of the Bolshevik Revolution, which would come in October 1917.

We have meetings scheduled tomorrow with Russian Orthodox leaders. We also intend to visit Butovo, just outside of Moscow, where thousands of believers were shot in mass executions under Stalin in the 1930s, and to venerate the relic of St. Nicholas, a piece of his rib, which has been venerated by more than 1.5 million Russians standing in line for as much as 10 hours during the past six weeks. The relic is on loan here, for the first time ever in 930 years, away from the saint's resting place in Bari, Italy.

We were met at the Moscow airport late this evening by Philip Champion, a Cambridge-educated assistant to Russian Orthodox Metropolitan Hilarion Alfeyev, the "foreign minister" of the Russian Orthodox Church. Champion took time to greet us and accompany us into the city, even though his summer vacation has begun. We appreciated his gesture greatly.

In Ukraine yesterday, we visited the village of Lyshnya, an extraordinary place. A group of Ukrainian women sang hymns and folk songs for us, 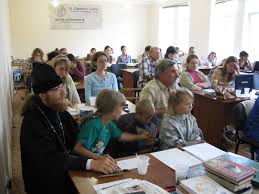 and we participated in a theological dialogue at a summer school promoted by the St. Clement's Center of Kyiv, founded by Ukrainian Orthodox intellectual Constantin Sigov two decades ago.

Lyshnya has become in the past four years a place where a group called "Children of Hope" has operated a summer camp for children of families affected by the violence in eastern Ukraine. We met many of the children, and exchanged stories with them, and shared a meal together.

The lunch we were served, with potatoes, cucumbers, soup, Kvas (a fruit juice drink) and cherries, was made entirely of vegetables grown in gardens in Lyshnya, and was the best lunch I have ever had in my life. 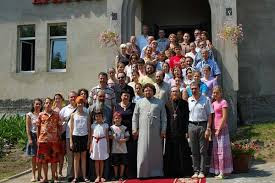 children of hope
Lyshnya, Ukraine
At the end of the day, we were shown an exhibit on the life and work of don Luigi Giussani, founder of the Catholic Communion and Liberation movement, and we were told that his faith and vision had inspired the development of the Children of Hope program in Lyshnya. This astonished me. It seemed that we had stumbled upon a place of true cooperation between Catholics and Orthodox, all dedicated to the hope of peace, and it seemed to me that this place would be a place that Pope Francis himself would like to visit. It is an oasis of simplicity and beauty just a few miles outside of Kyiv.

Wednesday July 12 in the eastern Churches is the feast day of Sts. Peter and Paul. 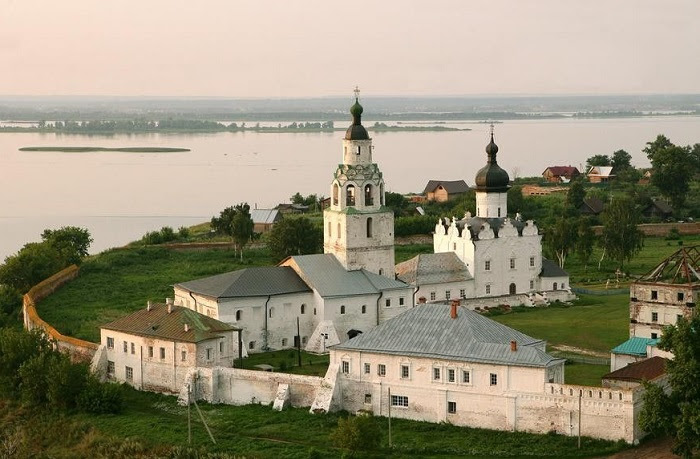 Also today, the World Heritage Committee meeting in Krakow, Poland,  since July 2, inscribed 8 cultural sites in Denmark, Japan, France, Germany, Iran, Poland, and the Russian Federation, along with one that spans Croatia, Italy and Montenegro, on the World Heritage list.

One of the sites added is: Assumption Cathedral and Monastery of the town-island of Sviyazhsk (Russian Federation), just outside Kazan, 600 miles due east from Moscow.

The Assumption Cathedral is located in the town-island of Sviyazhsk and is part of the monastery of the same name. Situated at the confluence of the Volga, the Sviyaga and the Shchuka rivers, at the crossroads of the Silk and Volga routes, Sviyazhsk was founded by Ivan the Terrible in 1551. It was from this outpost that he initiated the conquest of the Kazan Khanate. 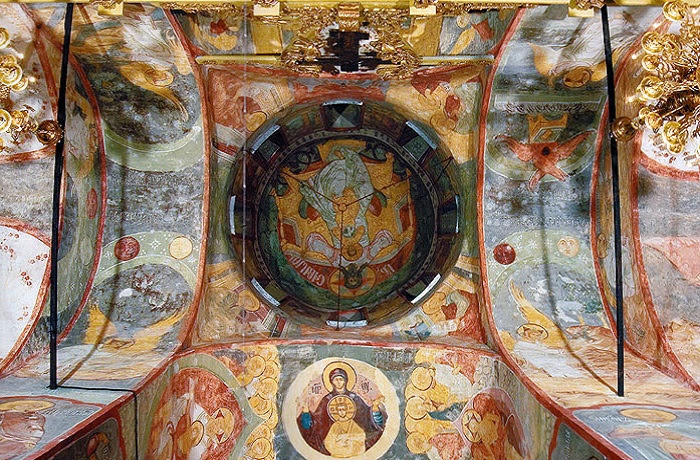 The Assumption Monastery illustrates in its location and architectural composition the political and missionary program developed by Tsar Ivan IV to extend the Moscow state. The cathedral’s frescoes are among the rarest examples of Eastern Orthodox mural paintings.

I visited the island along with Declan Murphy, Daniel Schmidt, and Pina and the late Jack Templeton in the summer of 2001, 16 years ago.

We rode in a small boat about a mile across the river, the water lapping up against the back of the boat which was only about two inches above the water of the river.

At one point, with about half a mile of water in front of us, and half a mile behind us, Dan turned to me and said, "Bob, there is something I never told you."

The Moynihan Letters are posted here.


Note: The Moynihan Letters go to more than 21,000 people around the world. If you would like to subscribe, simply email me an email address, and I will add you to the list. Also, if you would like to subscribe to our print magazine, Inside the Vatican, please do so! We appreciate all new subscribers very much. You might even consider purchasing a gift subscription for a friend, a student, a grandchild, a parish priest. Thank you. To subscribe, click here.

What is the glory of God? "The glory of God is man alive; but the life of man is the vision of God." —St. Irenaeus of Lyons, in the territory of France, in his great work Against All Heresies, written c. 180 A.D.


NOTE FROM FATHER DAVID
It seems to me that, if people really  want peace in Ukraine, if Russia really want a trouble-free relationship with the West, and if the NATO countries really want good relationships with Russia, then there is only one way forward.   Ukraine is a country divided in its culture and in its loyalties.  Western Ukraine looks to and identifies with Western Europe; while Eastern Ukraine looks to and identifies with Russia.   If it joins NATO, the western Europeans will be pleased; while if it joins a Russian defensive alliance, the Eastern Ukrainians will be pleased, but the western Ukrainians will be out of joint   There is only one solution.
Ukraine, like Sweden and Switzerland, must become neutral, with international treaties which guarantee their neutrality and give them preferential trading deals with both sides.