FATIMA, KAZAN AND THE NEW EVANGELISATION 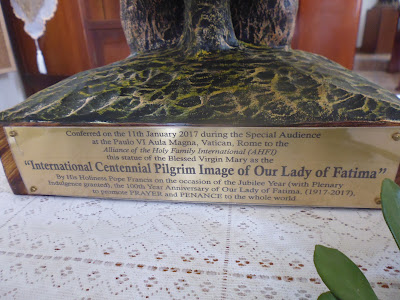 Pope Francis blessed six Centennial Pilgrim Statues of Our Lady of Fatima at the Vatican on Jan. 11 before sending them on tour in six continents. Hong Kong is the first place in the world where a statue landed.
"Pope Francis was really excited about this event. He looked at each statue, said a long prayer in front of each single one and gave his blessings," an organizer who escorted the statue to Hong Kong told ucanews.com. "He said he is expecting a news report of the pilgrimage journey too."
One of the statues of Our Lady blessed by Pope Francis will visit our monastery at Pachacamac on the outskirts of Lima in the morning of February 13th.  Holy Mass will be celebrated at 11.00am, and there will be an opportunity for confessions.

Rightly or wrongly, we associated these prayers with Our Lady's request at Fatima for prayer and penance for the conversion of Russia.  During the apparitions, Our Lady said:


The war is going to end: but if people do not cease offending God, a worse one will break out during the Pontificate of Pius XI. When you see a night illumined by an unknown light, know that this is the great sign given you by God that he is about to punish the world for its crimes, by means of war, famine, and persecutions of the Church and of the Holy Father. To prevent this, I shall come to ask for the consecration of Russia to my Immaculate Heart, and the Communion of reparation on the First Saturdays. If my requests are heeded, Russia will be converted, and there will be peace; if not, she will spread her errors throughout the world, causing wars and persecutions of the Church. The good will be martyred; the Holy Father will have much to suffer; various nations will be annihilated. In the end, my Immaculate Heart will triumph. The Holy Father will consecrate Russia to me, and she shall be converted, and a period of peace will be granted to the world”

Of course, the apparitions took place many months before the October Revolution in Russia, also before any sign that Russia would be particularly dangerous to Christians - Holy Russia seemed to be stable, even if it was at war with Germany.   To any who accept that this was Our Lady speaking, this is no difficulty.  Anyway, it was not being generally read and interpreted until after the Communist revolution, and devotees of Fatima had no difficulty or doubt about the evils of atheistic communism.  It is true that there is an extreme right-wing group who believe that ecumenism is from the devil and re-interpret the revelation accordingly; but, well, the Orthodox have the Athonite abbots!!

One rather surprising thing about Our Lady's teaching at Fatima is the idea that the prayers and penances of ordinary little people can, in some strange way, change the course of history, is they pray enough, if they do enough penance.  Put this the other way round, when we encounter a situation of great evil, we cannot completely exhonorate ourselves from what has happened: perhaps we have not prayed enough or lived enough of a Christian life, and so have contributed to this evil by not being good enough.  It reminds me of Starets Zosima who tells us to make ourselves responsible for all:

"But when he knows that he is not only worse than all those in the world, but is also guilty before all people, on behalf of all and for all, for all human sins, the world's and each person's, only then will the goal of our unity be achieved. [...] Only then will our hearts be moved to a love that is infinite, universal, and knows no satiety." (4.1.2)

THE STORY OF  FATIMA
One person who really believed in Fatima was Pope St John Paul II. During the apparitions Our Lady said,


"In the end, my Immaculate Heart will triumph. The Holy Father will consecrate Russia to me, and she shall be converted, and a period of peace will be granted to the world” 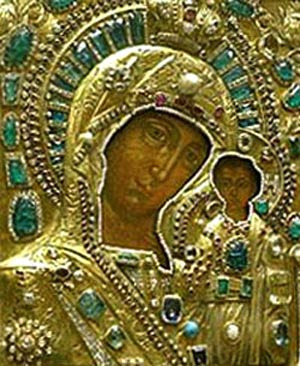 Pope John Paul knew that between the feast of the Transfiguration (August 6th in the Julian Calendar, August 19th in ours) and the feast of the Dormition (Assumption) (on August 15th in the Julian calendar and August 28th in ours) in 1991, Communism fell in Russia.  It culminated in a scene in which the Patriarch threatened any troops who fired on unarmed civilians would be excommunicated, and special forces refused to carry out KGB orders. This was the feast of the Dormition, and the Orthodox faithful believed that it was due to the intervention of Our Lady of Kazan.  St John Paul II also believed this, and saw it as a fulfilment of the prophecy at Fatima.  I think that he came to believe that the re-conversion of Europe would be heralded by the re-conversion of communist Russia, that a re-converted Holy Russia was of vital importance to the New Evangelisation, that it is in Our Lady's plan.  Also, the Evangelisation would be strengthened by the prayers and penances of little people: in all kinds of ways, we will all become evangelists.  Then he was given an old Russian icon of Our Lady of Kazan that had been given to the Sanctuary in Fatima.  He returned it to Russia.

The story is told here