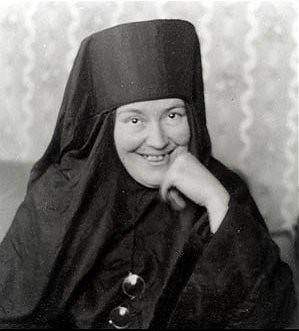 Today is the 71st anniversary of the death of St Maria Skobtsova of Paris in Ravensbrück concentration camp. She was certain that there was no other path to heaven than participating in God’s mercy. As she wrote: “The way to God lies through love of people. At the Last Judgment I shall not be asked whether I was successful in my ascetic exercises, nor how many bows and prostrations I made. Instead I shall be asked did I feed the hungry, clothe the naked, visit the sick and the prisoners. That is all I shall be asked. About every poor, hungry and imprisoned person the Savior says ‘I': ‘I was hungry and thirsty, I was sick and in prison.’ To think that he puts an equal sign between himself and anyone in need.... I always knew it, but now it has somehow penetrated to my sinews. It fills me with awe.”

A short biography of her:
“Mother Maria of Paris: Saint of the Open Door” by Jim Forest
http://incommunion.org/2004/10/18/saint-of-the-open-door/

A page of links relating to her and her co-workers:
http://incommunion.org/st-maria-skobtsova-resources-2/ 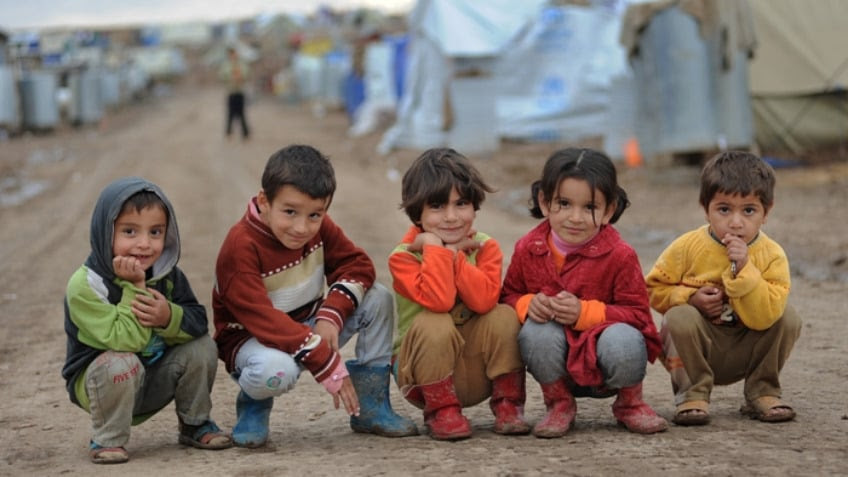 'Did you see anything extraordinary on your visit to the Refugee Camp?' a policeman asked the Westminster diocesan Caritas and Justice and Peace expedition at the Calais UK Border control on Easter Tuesday evening. The question kept us debating and laughing during the short tunnel journey back to the UK (after a two-hour hold-up as hundreds of travellers were asked the same thing). Nine people from Caritas Westminster, St John Vianney Parish and Westminster Justice and Peace had just delivered a packed minibus full of food and clothing to the new Catholic Worker house dedicated to St Maria Skobstova, in Calais, for distribution to refugees under the supervision of Brother Johannes Maertens, formerly of the Catholic Worker House in Harringay, North London. 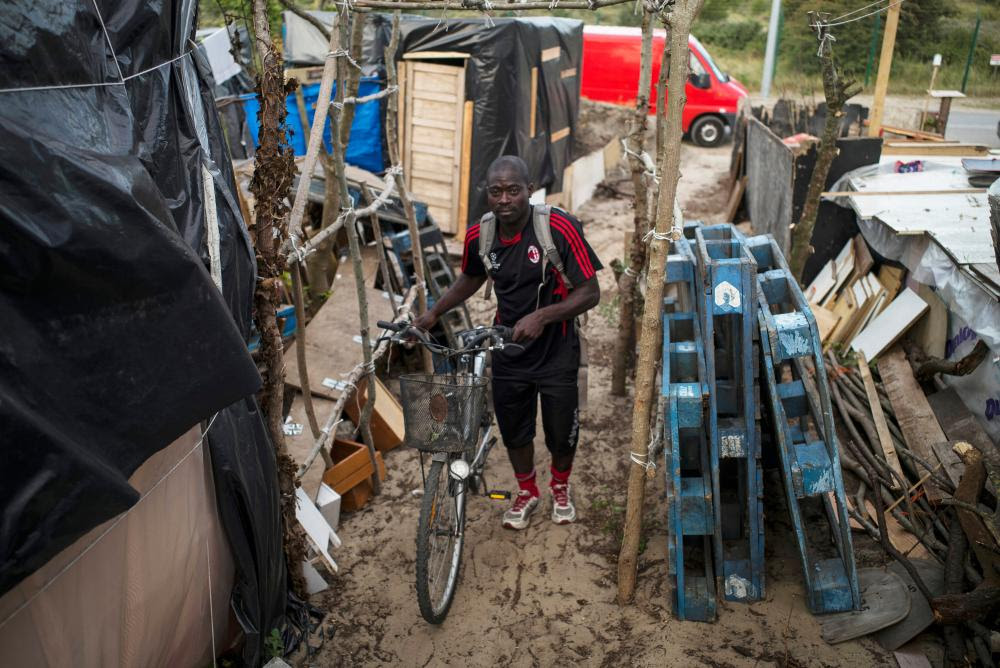 'Extraordinary' was code for 'extremist/terrorist', so of course our answer to the policeman was 'no'. But, 'yes', there were many extraordinary things about the trip: St John Vianney's had, in just over two weeks, collected £1300 in cash for the refugees. Likewise, at short notice, two minibuses were provided and crossing paid for by Caritas Westminster: one loaded to the roof with dried food, toiletries, clothing and bedding, packed over the Easter weekend by enthusiastic parishioners, and the other for the group to travel in.
Goods were donated by a variety of sources: Chipping Barnet Food Bank,
St John Vianney Parish, St Mellitus Parish, Sainsburys Local store in West Green Road N15, Haringey Migrant Centre and Justice and Peacem individuals. Hundreds of tins of soup, beans, fish, meatballs, were stacked under seats and above them, boxes of tea, coffee, sugar and pasta, topped with the bags of clothing and new bedding. Brother Johannes was delighted at the 'Aladdin's minibus' of goodies. To collect this and arrange the trip at such short notice was an extraordinary act of generosity and good organisation on the part of so many. Likewise, we could have answered 'yes', when Johannes took us to the 'Jungle' camp that afternoon. The whole of the south area had been flattened, and we photographed bulldozers ploughing up traces of human life: a shoe, a jumper, a half-used tube of toothpaste, small signs of interrupted life, disappearing under heavy machinery, sand and gravel already being rolled over the vast open ground. 'Yes', it was extraordinary that the communal places were left standing, forlorn and isolated in this building site. You would have to cross large bulldozed furrows to reach a youth centre, a mosque, a school, an information centre. Johannes took us to the now famous Ethiopian church where we met Solomon, its creator and guardian, sitting with friends round a wood fire, protecting the compound of this sacred space. French authorities have left some communal buildings, but
destroyed the individual shacks and shelters. 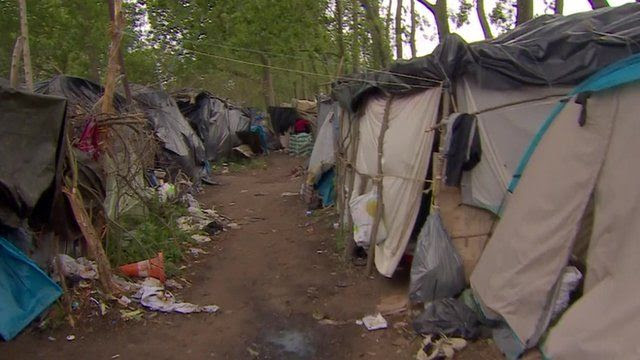 Those who have followed Israeli-Palestinian events, with the bulldozing of villages on occupied land, or the Crossroads township erased under apartheid in South Africa, will recognise the scenario. Extraordinary to see it here, only a Channel tunnel away from our shores. Where the displaced have gone varies. Volunteers are trying to count the current inhabitants and estimate still around 4000. Container shelters have been built for up to 1500 people, which hold 12 beds per container and are fiercely metal-fenced off with security gates. Residents must go out for sanitation and for eating. The rest have either squashed up in the remaining space or tried to move on. A
small number have accepted the French government offer of being transported to other centres. But attempts to jump trains and vehicles to get to the UK still continue, as people continue to seek an end to the long migration trail.

An Afghan imam invited us into a small but solid 'café' and offered sweet tea. A generator operated cooking and storage facilities, as well as a TV tuned to an Asian station. Our hosts were Afghan and Pakistani, and many visitors have commented on the harmony which makes the camp work together. Johannes explained the rise of strong community leaders, who keep the peace and arbitrate disputes. Here in France they are non-persons, and therefore not entitled to normal civil or criminal procedures. He supports and initiates interfaith gatherings which bind the various nationalities. Given the desperate circumstances, criminality is very low - again extraordinary!

Back at Maria Skobstova House, which is owned by Secours Catholique/Caritas France, Johannes explained the help they offer: respite for refugees, accommodation for volunteers who go into the camp, and a place of prayer for and with refugees. Some, he said with
surprise, wanted to convert to Christianity. 'I see myself as offering pastoral support, not conversion. I am not sure yet how to handlethat!' He showed us a video available on Youtube, Lotus Flower - Don't Bulldoze the Jungle, which focuses on the fragile but amazing community spirit being forged in the camp. John Coleby, director of CARITAS Westminster, commented on this - the contrast between the 'hell-on-earth' of the landscape and the warmth of the communitieswhich have been forged to survive it.

The glaring void is of course the refusal of the UK or the French to install due process. There is no legitimate way these people, desperate to reach England, can apply for UK asylum, no British consul or Home Office outpost, due to the Dublin agreement. The UK government has supported French security to the tune of 60 million euros so far, and recently pledged a further 20 million. The French see the Calais refugees as non-people, and so do we. This is our Lesbos, our Lampedusa. It is, as Pope Francis says, a globalised indifference, So, really, what we saw on Easter Tuesday was not extraordinary.

or Caritas Social Action Network for ways to contribute to the Calais
situation http://www.csan.org.uk/newsarticle/refugeecrisis/#.Vvvpk3qdD2Q


or London Catholic Worker at http://www.londoncatholicworker.org/

my source: College of Holy Cross

Robert Ellsberg is editor in chief and publisher of Orbis Books, a leader in religious publishing. He worked alongside Day at the Catholic Worker House in New York City and as managing editor of the Catholic Worker newspaper during the last five years of her life. Ellsberg edited Day's “Selected Writings: By Little and By Little,” and more recently her diaries in “The Duty of Delight: The Diaries of Dorothy Day” and her letters in “All the Way to Heaven: The Selected Letters of Dorothy Day.” He has written books including “All Saints: Daily Reflections on Saints, Prophets, and Witnesses for Our Time,” “The Saints' Guide to Happiness: Practical Lessons in the Life of the Spirit”; and “Blessed Among All Women: Reflections on Women Saints, Prophets, and Witnesses for Our Time.”

About the Event: Ellsberg talks about Day's life and service and lays out his argument for her canonization. Horton talks of the canonization process in New York and expectations moving forward.

(THIS IS AN EXCELLENT TALK - FrD)