THE UNPRECEDENTED "PRESUMPTION" OF CHANGING THE WORLD: A HOMILY & MASS BY POPE FRANCIS and AN ESSAY BY A SOCIOLOGIST by Sandro Magister


A homily and a Mass of Pope Francis. An essay by the sociologist Luca Diotallevi. Convergent in seeing in the Eucharist the genesis of the new world

ROME, April 11, 2013 – Almost one month after his election as pope, there are two words that Jorge Mario Bergoglio has not yet pronounced: religious freedom.

He did not say them, contrary to expectation, even in the discourse that he addressed to the ambassadors from almost all the countries of the world.

The only time he has spoken of religious freedom - although without calling it by name - was on Saturday, April 6, in one of the brief homilies that he improvises during the morning Masses in the chapel of the Casa di Santa Marta, where he resides.

But he did so in a style of his own. Pope Francis did not waste any words against the persecutors, nor against those who in more subtle forms suffocate the freedom of believers.

Instead, he took the side of the persecuted:

"To find the martyrs it is not necessary to go to the catacombs or to the Colosseum: the martyrs are living now, in many countries. Christians are persecuted for their faith, today, in the 21st century, our Church is a Church of martyrs.”

Then he identified himself with ordinary Christians. He cited the words of Peter and John in the Acts of the Apostles: “We cannot remain silent about what we have seen and heard.” Then he continued:

"The faith is not negotiable. There has always been, in the history of the people of God, this temptation: to cut a piece away from the faith, perhaps not even very much. But the faith is how we speak of it in the Creed. We must overcome the temptation to do a bit as everyone does, not to be so very rigid, because right from there begins a road that ends in apostasy. In fact, when we begin to cut up the faith, to negotiate the faith, to sell it to the highest bidder, we start down the road of apostasy, of infidelity to the Lord.”

For Pope Francis, religious freedom means above all “having the courage to bear witness to faith in the risen Christ.” A faith that is complete, and public. A faith that presumes to transform society.

“The presumption” is precisely the title that the sociologist of religion Luca Diotallevi has given to his latest essay, published in recent days.

It is an essay harshly critical toward the theories of “secularism” - theories widespread even within the Church and improperly applied to Vatican Council II as well - that rule out a direct connection between the Gospel and the social order, in homage to a presumed “neutrality” of the state.

To the paradigm of “secularism” Diotallevi opposes the paradigm of religious freedom, typical of the Anglo-Saxon world but with theological foundations that have their bedrock in the "De Civitate Dei" of Augustine and before that in the New Testament.

According to this vision, the “saeculum" between the first and second coming of Christ is an interweaving of time and eternity, it is a conflict between sin and grace. In this conflict participate the thrones, the principalities, the dominations of which the New Testament speaks, referring to the powers of this world. They are the rebel powers over which the cross and resurrection of Jesus have won definitive victory, victory that however has not yet had its fulfillment. In the “saeculum" these powers still oscillate between the extremes of anarchy and absolute dominion, while the Church, which safeguards the gift of victory, works to hold them back from one and the other extreme.

After Augustine, this New Testament vision of history has been developed in our time by Oscar Cullmann and Joseph Ratzinger, extensively cited by Diotallevi.

But the most original feature of the essay is where it identifies in the celebration of the Eucharist the source and summit of this “presumption” of the impact of the Christian faith on the social order, here as well in full continuity with Benedict XVI.

"Every Eucharistic liturgy, every Mass, is a rite in which the participant makes the claim of sharing in the one work of victory and making an effective proclamation of it. The Eucharist does not provide any definite or definitive model of social order. The heavenly Jerusalem will come on the last day and from on high, and the Eucharist works and proclaims the victory that shatters space and time so as to generate time and space for that gift. It works and proclaims the definitive defeat of the plans of dominion of the powers and principalities, opening and indicating a never-stabilized intermediate condition between absolute dominion and anarchic dissolution of social life.”

"The celebration of the Eucharist proclaims and realizes the prohibition of any statalization of the Church and any ecclesiasticization of politics. The pilgrim Church does not found the earthly 'civitas,' but dwells there and by dwelling in it preserves it.”

In the light of this vision, it becomes even more understandable why Pope Francis decided to celebrate the Mass last Holy Thursday not only in a place, like the juvenile detention facility of Casal del Marmo, in which the conflict between sin and grace is more visible than elsewhere, but also in the presence of persons of other faiths and of no faith.

Because the Eucharist is the Church that makes itself visible, it is the victorious work of God that breaks through into history and is presented to the gaze of every man, it is Jesus raised on the cross between the two thieves, with the centurion who recognizes him as Son and the earth that trembles.

The educated pagans of the first centuries were not mistaken when to identify Christianity they described it in the very act of celebrating the liturgy.

THE ICON OF THE TRANSFIGURATION 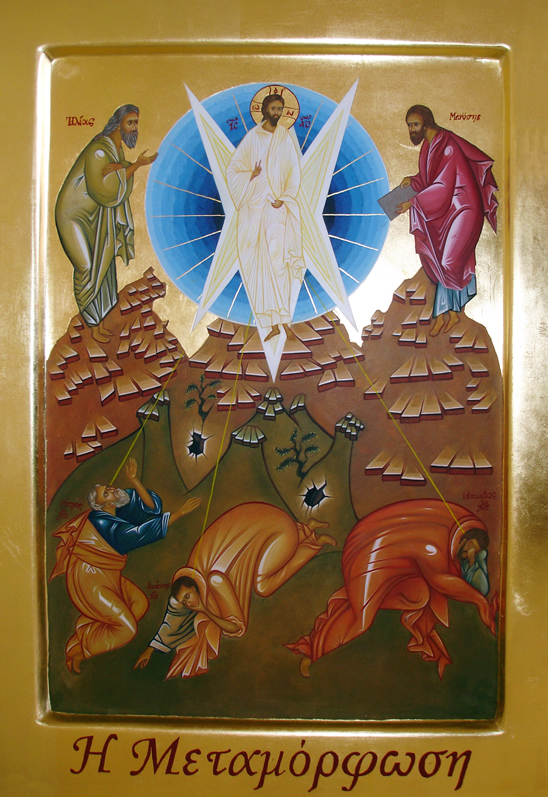 This may not seem to have anything to do with the report by Sandro Magister, but I think it fits in very well.
I was chatting after Mass on the Feast of the Annunciation which is our patronal feastday because we are "the Monastery of the Incarnation."  We were discussing the "luminous mysteries" composed by Pope John Paul II.   Someone said that he couldn't make head or tail of the Transfiguration.   He asked me if I would tell him how the Transfiguration is relevant to his spiritual life.

I said, "I saw that you went to communion today.   Jesus said, ""He who eats My flesh and drinks My blood abides in Me, and I in him. ... Those who eat my flesh and drink my blood live in me, and I live in them."   Hence you are a tabernacle, a living monstrance; and Christ lives in you. He wants to transform you so that you can share in his own divine life; and he wants to manifest his presence to others.  Yet, not long after communion we forget and occupy our minds with other things.     He wants to allow us to say in truth, "I do not live, but Christ lives in me;" but how can we,  if we ignore him?   We must centre our lives on him whom we receive in communion and who dwells in our heart; and he will transfigure us from within.   We don't transfigure ourselves: Christ does that in proportion to our humility, and to the degree that we put ourselves at his disposition..   The deeper our humility, the more intimate the union of ourselves with Christ, and the more we manifest his presence if and when and how he wills.   Why is a mere photo of Mother Teresa of Calcutta better than many a sermon?   Her very presence spoke of Christ who lived within her.

It begins with communion; and as this communion grows deeper, so we are transformed.   This transformation is our participation in the Transfiguration.   We begin by taking seriously Christ's presence within our hearts.

click on A Commentary by Dom AlexEacheandia, monk of Pachacamac, on an icon of the Transfiguration he has "written".   It is a post well worth taking the trouble to read.   Dom Alex is a pupil Aidan Hart, a very good Orthodox iconographer.   There is a link to Aidan Hart's blog in "Imago Dei".   It is a good blog and an excellent article.