THE IMMACULATE CONCEPTION AND ORTHODOXY 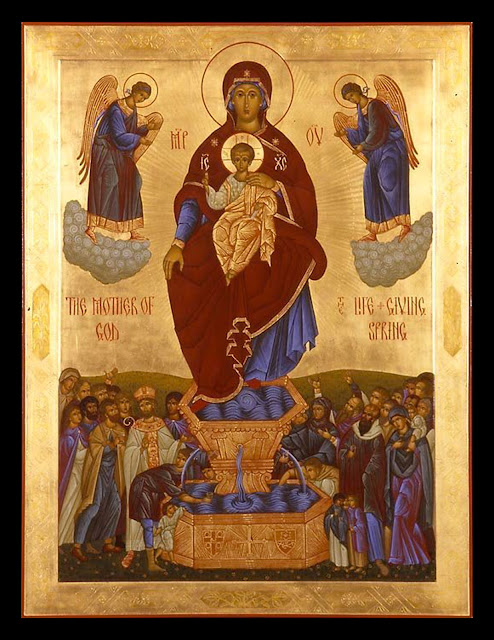 
One objection raised by some Protestants is this: If the Immaculate Conception is truly apostolic teaching, then why do the Eastern Orthodox Churches reject it? After all, those Churches trace their lineage to apostolic times just as the Catholic Church does. To answer that, we have to understand why the Roman Church developed her doctrine in the way she did and why the East did not take the same path.

Some people have the notion the Eastern Orthodox Churches reject the Immaculate Conception because a few early Eastern Fathers (Origen, Basil, and John Chrysostom) expressed a couple of doubts about Mary’s sinlessness. Origen thought that, during Christ’s Passion, the sword that pierced Mary’s soul was disbelief. Basil had the same notion. And John Chrysostom thought her guilty of ambition and pushiness in Matthew 12:46 (an incident we have already examined).

But the remarkable thing about these opinions is how isolated they turn out to be. Essentially, they demonstrate (once again) something about the development of doctrine that we’ve already seen in connection with the Trinity: The Catholic Church is not a monolith and her people, even very good people, sometimes voice in good faith ideas that end up departing from the orthodox norm. For the reality is that, apart from these three, the overwhelming consensus of the Fathers in both east and west is that Mary is “most pure,” (Liturgy of St. John Chrysostom) “formed without any stain,” (Proclus, Laudatio in S. Dei Gen. ort., I, 3) “all-Holy,”( Hippolytus, Against Beron and Helix, Frag VIII) “undefiled,” (Ibid) “spotless,”( Hippolytus, A Discourse on the End of the World) “immaculate of the immaculate,”( Origen, Homily 1) “inviolate and free from every stain of sin,”( Ambrose, Commentary on Psalm 118, 22–30) and created in a condition more sublime and glorious than all other natures.( Theodorus of Jerusalem in Mansi, XII, 1140) In short, for the Eastern Fathers, as for the Catholic Church, Mary is as St. Ephraim describes her:

Most holy Lady, Mother of God, alone most pure in soul and body, alone exceeding all perfection of purity . . . alone made in thy entirety the home of all the graces of the Most Holy Spirit, and hence exceeding beyond all compare even the angelic virtues in purity and sanctity of soul and body . . . my Lady most holy, all-pure, all-immaculate, all-stainless, all-undefiled, all-incorrupt, all inviolate spotless robe of Him Who clothes Himself with light as with a garment . . . flower unfading, purple woven by God, alone most immaculate (Ephraim the Syrian, Precationes ad Deiparam in Opp. Graec. Lat., III, 524– 37).


So if the Eastern Orthodox Churches ignored Origen, Basil, and Chrysostom when they speculated that Mary was sinful, why do they reject the Immaculate Conception? In a nutshell, they reject it because the Immaculate Conception is the answer to a number of questions the Eastern Christians were never much interested in asking. And if you don’t ask the questions, you don’t come up with the answers. But, as we shall see, that’s cold comfort for Evangelicals.


Here’s the deal: In the fifth century, a question arose in the Western Church: “Are we sinners because we sin or do we sin because we are sinners?” A monk from Britain named Pelagius began to teach that we are only sinners because we sin, and so we can save ourselves simply by willing not to sin anymore. Jesus, said Pelagius, was primarily sent as a good example. Our task was to just grit our teeth and, through sheer will power, imitate him perfectly, thereby freeing ourselves from sin. This notion began to attract some Christians in western Europe because it appealed to a cultural imperative that approved of demanding high and heroic deeds from oneself. There was only one problem: Pelagianism wasn’t true—a fact proven in the Laboratory of Human Experience by everybody who has ever tried it.

The foe of Pelagianism was the great Father of the Western Church, Augustine of Hippo. Basing his argument on Paul’s teaching, Augustine reminded the Pelagians that, in truth, we sin because we are sinners, born of the fallen Adam. This is why, Augustine argued, the Gospel says, “[S]in came into the world through one man and death through sin, and so death spread to all men because all men sinned” (Rom. 5:12). And so, concluded Augustine (with the agreement of the Western bishops and the pope), Pelagius is disastrously wrong to claim that we can, on our own and without God’s aid, save ourselves from sin. For sin is, in its most fundamental reality, the lack of the life of God. And it’s nonsense to speak of restoring the lack of God’s life in our souls without God.

Now all of this was basically believed in the Eastern Orthodox Churches as well. Eastern Orthodox Christians read the same Pauline letters their Roman cousins read. But the Pelagian controversy never really affected the Eastern Churches. So the Eastern theologians never saw much point to closely defining just how it occurs that we are sinners, and therefore they never got around to fussing much about philosophical terms like “original sin.” The East simply tended to affirm the broad and mysterious statement that we are all sinners “in Adam” and left it at that.

Why does this matter? Because if you don’t have a concept of original sin threshed out and articulated as it has been in the West, then you don’t need to explain how it is that Mary isn’t affected by original sin. You can—and, until need arises, probably should —simply do what the Eastern Churches did: acclaim Mary as “Panagia” or “All Holy” (i.e. sinless), sing “Hail, O Bride and Maiden ever-pure!”( Akathist Hymn to the Blessed Virgin Mary) and leave it at that. That’s why there’s not much comfort for Evangelicals in the Eastern Orthodox Churches. For Eastern Orthodoxy doesn’t bother with the notion of original sin (which Evangelicals, relying on Catholic tradition, insist upon) while heaping the same accolades on Mary’s sinless life that Catholics do.

click on: THE IMMACULATE CONCEPTION AND THE ORTHODOX CHURCH by Fr Lev Gilet (Orth)

The Feast of the Immaculate Conception of the Blessed Virgin Mary is an Advent feast, because the grace of the Immaculate Conception was given to the Virgin by God in preparation for the Incarnation.   Belonging to the time of preparation, it brought to perfection in Mary's soul that long process of preparation of the Jewish people for the Messiah that began with God's covenant with Abraham.  It is an Old Testament grace, a grace of preparation.   As the dogmatic decree stated and in accordance with the legalistic theology of the time, it was a privilege granted to Our Lady because of the foreseen merits of Christ on the Cross, like all Old Testament grace was.   It can be expressed in non-legal language, within the context of salvation history.   Mary was conceived in the highest form of Old Testament grace that God could give her, the fruit of much preparation by God, so that she could become a temple worthy of her Son and so that she should be a model for us, showing us the full effects of the Divine Life on a human being who has received grace.      This relationship would achieve its purpose when creation became united to its Creator in Mary's womb, when she truly became Mother of God.   Then, at that moment, the grace of the New Testament came into existence, born of the harmony between the activity of the Holy Spirit who enables and humble, loving human obedience which becomes enabled.   In this way, Mary became Mother of God, and Jesus, Son of God became son of Mary; this harmony deepened and strengthened during Christ's life and reached totally new heights in his obedience unto death.   Made perfect by this loving obedience, this new relationship with God (New Testament grace) became Christ's very life when he rose again and ascended into heaven.   By the power of the Holy Spirit, Jesus shared this life with his Church at Pentecost, and Mary, in whom this life originated, became our mother by the power of the same Spirit.

Original sin has such a profound effect on us that Mary, without the Immaculate Conception, would never have had a human nature pure enough to pass on to her Son, nor would she have been so transformed by New Testament grace to be the perfect model of a saved person for us.  The legalistic interpretation of the Cross, which makes the Incarnation necessary so that Christ could adequately pay the debt owed to God by the human race in sin, is superficial because it fails to give sufficient importance to the Incarnation as the accomplishment of a new relationship between God and his creation and as the very source of New Testament grace.