THE WESTERN RITE by Father Patrick Reardon, a Orthodox Priest

This is a very important talk by an Orthodox priest.   He was given the topic, "What contribution can the Western Rite make to Orthodoxy?"   It could, perhaps be better put, "What contribution can Western Patristic Tradition make to Orthodoxy?"  He admits that the Liturgy of St John Chrysostom has its limitations and needs to be complemented by liturgy in the western tradition.  He explores the contribution of St Augustine and St Leo the Great to Tradition as expressed in the Council of Chalcedon.   He also has a few critical words about the western rite as practised in America. 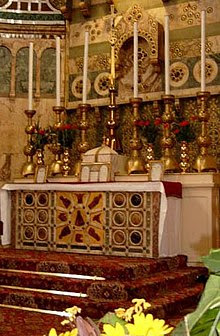 If you wish to listen to this podcast from Ancient Faith Radio, please click here.

I would say that the Roman Rite also has its limitations, even in its post-Vatican II form.  It is now a great improvement on the form of Mass that was imposed after Trent.   There are Eucharistic prayers which include an epiclesis, and this has brought about a renewal of our theology of the Holy Spirit; it has a much better and more comprehensive liturgy of the Word; and, above all, people now pray the Mass, rather than say prayers during Mass - not the same thing.   Most of the limitations that it still has are inherited from the older pre-Vatican II form.

On the whole, people don't rattle through the Mass as they so often used to.  I read in a blog recently how people rattle   through the second eucharistic prayer; but it is absolutely nothing in comparison to how people rattled through the Roman Canon before the changes.   One monk, not at all an unworthy priest, used to rattle through the Mass in ten minutes as a norm, and there were others not far behind!!   After all, as he said to me once, the only essential words are the words of institution: all the rest are padding!!

There is a lot of guff talked nowadays about how wonderful it was in the old days.   Also, there is no moral difference between celebrants drawing attention to themselves by behaving like television personalities hugging their microphones, and drawing attention to oneself by wearing birettas and lace.  The most ancient and authentic rubric is that of St John the Baptist: He (Christ) must increase and I must decrease.

The biggest Vatican II teaching that has not been sufficiently woven into the liturgy is that we participate in the liturgy of heaven by participating in the liturgy of earth; and what springs from it, that Christ is present when the Scriptures are read in Church, when prayers are said and hymns sung.   All that is done much better in the East.  Thus people are aware of the many faceted presence of Christ in the whole of the liturgy, and not just after the consecration.  As the old Latin Mass was no better, that is a further change required by the "Reform of the Reform". - Fr David Bird
Posted by Father David Bird O.S.B. at 06:07