METROPOLITAN ALEKSANDR OF ASTANA AND KAZAKHSTAN 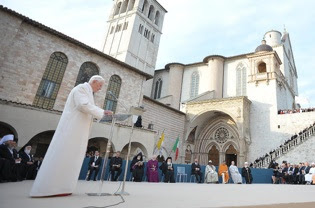 There's a New Star in the Russian Sky. His Name Is Aleksandr
He led the delegation from the ;patriarchate of Moscow in Assisi. Together with Metropolitan Hilarion, he is an emerging leader of the new generation. In great harmony with the Church of Pope Benedict

The fact that the Orthodox patriarchate of Moscow and all Russia sent him as the head of its delegation to Assisi made some think of a downgrading and of a sticking point in the dialogue with the Church of Rome.

Nothing could be more mistaken.

Aleksandr is not at all a second-rank figure. He is the new star of Russian Orthodoxy.

Born 51 years ago in Kirov, northeast of Moscow, Aleksandr attended the seminary of Saint Petersburg, known as Leningrad at the time, when its rector was the current patriarch of Moscow, Kirill. As an archbishop, he spent ten years directing the synodal department for young people. In March of 2010, he was appointed archbishop of Astana, the capital of Kazakhstan. Four months later he was elevated to the rank of metropolitan. And at the beginning of this autumn, he was appointed a permanent member of the Holy Synod.

The Holy Synod is the supreme authority of the Russian Orthodox Church. Until a few weeks ago, it was made up of twelve members: seven permanent and five temporary, the latter of which remain in office for no more than a year.

With Aleksandr, the number of permanent members of the Holy Synod has been brought to eight: a sign that his appointment was so strongly desired as to require a modification in the canons, which will be ratified soon.

In Assisi on October 27, of the ten delegates from the patriarchate of Moscow, three were bishops. One of them was another permanent member of the Holy Synod, the metropolitan and patriarchal exarch Filaret of Minsk and Belarus, a great supporter of dialogue with the Catholic Church who will soon host, in his city, a conference on relations between Orthodoxy and Catholicism, from November 13 to 15.

But in spite of Filaret's authority and prestige, in Assisi the role of head of the Russian Orthodox delegation was in effect played by Aleksandr, who is much younger than him.

In the afternoon ceremony in front of the basilica where Saint Francis is buried, it was Aleksandr who spoke. And before this, during the "frugal" lunch, he was the one seated at the same table as Benedict XVI.

At the Vatican on the following day, October 28, at the formal luncheon hosted by cardinal secretary of state Tarcisio Bertone for the three hundred guests of the encounter in Assisi, it was again Aleksandr who was seated at the head table, to the right of Bertone and the ecumenical patriarch of Constantinople, Bartholomew I.

In the Holy Synod of the Russian Orthodox Church, Metropolitan Aleksandr marks a generational transition. Other permanent members like the patriarch of Moscow, Kirill, and the metropolitans Vladimir of Kiev, Vladimir of Saint Petersburg, Filaret of Minsk, Juvenaly of Krutitsy and Kolomna, have all passed the age of 75.

Aleksandr's generation has produced the other young star of Russian Orthodoxy, Metropolitan Hilarion of Volokolamsk, president of the department of external relations at the patriarchate.

On October 27, Hilarion was not in Assisi, but in Switzerland, at the Catholic university of Freiburg, in the theological faculty where he studied, where he is an honorary professor and where he sent his closest collaborator, Archdeacon Ioann Kopeikin, to get his doctorate.

The university of Freiburg was the cenacle of formation for theologians and leaders of the first rank in the Catholic hierarchy, very close to Pope Joseph Ratzinger: from the current archbishop of Milan, Cardinal Angelo Scola, to the new bishop of Lausanne, Geneva, and Freiburg, Charles Morerod, appointed last November 3.

At the beginning of October, in the first assembly of the winter session of the synod of the Russian Orthodox Church, Metropolitan Hilarion was also put at the head of the synod commission on the Bible and theology, in the place of Filaret of Minsk: a role similar to that of Ratzinger during the pontificate of John Paul II.

And shortly before this appointment, at the end of September, Hilarion had a meeting in Rome with Benedict XVI: not the first or the last in an increasingly intense relationship between the two, which also includes their friendship.

Finally, as further proof of the growing reconciliation between the two Churches, Patriarch Kirill met last November 1 with the Catholic archbishop of Moscow, Paolo Pezzi.

In commenting on the meeting, the first ever between the two, Pezzi credited Kirill with getting the Orthodox bishops of the different regions of Russia to accept "positively" the presence of Catholics, "no longer considered foreigners."

And the patriarch of Moscow said that he believed the tensions of the 1990's, when the Catholic presence in Russia was viewed as aggressive, had been  "overcome": "Today Orthodox and Catholics work together and have formed a common front for the defense of Christian values in modern society." rch; for it is on the altar that the Liturgy and Holy Orders and the
Chrism take place… Through the altar the church is made holy; for
without an altar there can be no church, but only a House of Prayer…
it is not the Tabernacle of God’s glory, nor His dwelling place…nor
can the divine gifts be offered on its Table…
(Announcing the Consecration of the
Annunciation Greek Orthodox Church
Stamford, Connecticut
Posted by Father David Bird O.S.B. at 15:15