The Meaning of the Prayer of St. Ephraim the Syrian by Fr Alexander Men (Orth) 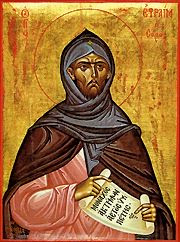 Every day of Great Lent, with the exception of Saturdays and Sundays, the prayer “O Lord and Master of my life” is read. According to tradition, this prayer was written in Syria in the fourth century by the ascetic Mar Afrem or, as we have grown accustomed to calling him, Ephraim the Syrian. He was a monk, poet, and theologian, one of the most eminent sons of the Syrian Church, who entered world literature as a remarkable writer.

The words of the prayer, which were quite accurately transmitted by Pushkin [1], sound as follows when translated from the Syrian: “O Lord and Master of my life,” that is: Ruler of my life, Who gave me life, Who is the center and focal point of my life. “Give me not a spirit of idleness,” that is, laziness, which is, according to the old adage, the mother of all vices. Laziness seems like an innocent thing, but it engenders much that is dark and black.

Lenten Prayer of St. Ephrem (St. Ephraim the Syrian)
O Lord and Master of my life, take from me the spirit of sloth, despair,
lust of power, and idle talk.
But give rather the spirit of chastity, humility, patience, and love to Thy servant.
Yea, O Lord and King, grant me to see my own transgressions, and not to judge my brother, for blessed art Thou, unto ages of ages. Amen.
“Despondency (Despair).” Christianity is a joyful doctrine; joyful, too, is he who is despondent – for it will leave him. St. Seraphim of Sarov, the great Russian saint of the nineteenth century, said: “We have no ways to be despondent, for Christ has saved everyone.”

“Ambition (Lust for power).” This means love of authority. Everyone has it; do not think that the cult of personality exists only in politics: it can also be present in the family or in any small community. Everyone has in himself the seeds of the aspiration to crush the will of others, to strangle and subdue it.

“Idle talking.” I exempt children: they have the right to chatter, but only until the age of fifteen or sixteen. When children chatter they are learning to communicate and are practicing their language; but when these “children” are already twenty, or sometimes older than forty – this means they are being pitiless towards their own lives. Let us consider (and let us be honest with ourselves): how much longer do we have to live? Not much longer at all. Therefore, I repeat, we should value life and love the gift that God has given us, remembering that we will carry into eternity only that which we have in our hearts. Idle talk and blathering are frightful words, for they involve killing time.

“Spirit of chastity.” Further on the prayer says: “a spirit of chastity… patience, and love bestow upon me Thy servant.” Chastity is purity of relations with the world and with people, wholeness of soul, without duality, and without the passions gaining possession over you. The wisdom of modesty is extraordinary and beautiful.

“Humble-mindedness (Humility).” This means the wisdom of the healthy person. Humility here, in the given context, means knowing where you stand against the backdrop of eternity. Do not inflate yourself like the frog in Krylov’s fable– it burst [2]. There is no need to exaggerate, but one should know one’s worth. The wisdom of modesty is extraordinary and beautiful. The wisdom of modesty is not abasement beyond pride, but healthiness of soul. Here is an example for you. When someone begins to imagine himself as something that he is not, he is only a few steps from megalomania. Megalomania is a pathological state of pride. One person announces that he is the chairman of the Council of Ministers or Napoleon, and he is placed in a psychiatric hospital; another makes no such pronouncement, for which reason he is not in the hospital, but in his soul he thinks he is superior to everyone else.
patience is a form of courage
“Patience, and love.” What is patience? I will put it briefly so that you will remember. Patience is not the state of cattle, which tolerate everything. It is not humiliation – not at all. It is not a compromise with evil – under no circumstances. Patience is the ability to maintain equanimity of spirit in circumstances that impede such equanimity. Patience is the ability to achieve one’s goals when encountering various obstacles along the way. Patience is the ability to maintain a joyful spirit even when there is an excess of grief. Patience is a victory and an overcoming; patience is a form of courage. This is what real patience is.

Finally, love. Love is the utmost happiness of man; it is the ability of our souls to be open, immanent (as the philosophers say), inwardly open to the other person. When you are riding the escalatory in the subway, test yourself to see if you are able to love or not. When you look at the people riding on the other side and you find it repulsive to look at their faces, it means that all the pores of your soul are clogged and that your feeling of love is in an embryonic state.
But the power of Christ’s grace is capable of rebuilding a person in such a way that he sees people in an entirely different manner; so that his first reaction will be benevolence; so that he will immediately see the beautiful in both women and men, in as inspired manner, even where no one else notices it; so that when seeing a suffering face he will feel compassion; so that he will be open. Such a person is always happy, because he is united with people and lives lovingly.

You ask me: perhaps this is appeasement and compromise with evil? Under no circumstances. Never. We must call evil by its name. But we must have compassion for the person who falls into this sin.

This is the essence of this prayer read daily with prostrations during Great Lent.

From the lecture “Great Lent,” delivered on April 1, 1989. (Translated from Russian.)

Translator’s notes
[1] The poem is “Desert Fathers and Immaculate Women,” written in 1836.
[2] The fable is “The Frog and the Ox,” which originated with Aesop and was adapted by Krylov (among several others fabulists)
at 7:48 AM 0 co
Posted by Father David Bird O.S.B. at 02:53