A remote archipelago is one of Russia’s holiest places—and its most haunted.

By Jeffrey Taylor
January 2012
The Atlantic 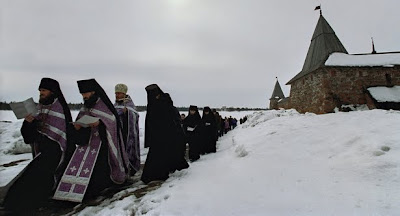 From the upper reaches of the whitewashed belfry—between the gunmetal onion domes of the Spaso-Preobrazhensky Cathedral—a giant bell announced the evening liturgy. Scarved women in loose woolen skirts and shaggy-bearded monks in black frocks hurried across the cobbled courtyard of Solovetsky Monastery, passing me, their eyes averted.

I turned to face the sun above the massive stone walls, seeking a warmth that’s fleeting here in Russia’s farthest-flung holy citadel, located on the largest of the Solovetsky Islands amid the gale-lashed White Sea, just outside the Arctic Circle.

The Solovetsky Monastery ranks as one of the country’s most important. But the monastery, and indeed the Solovetsky Islands (Solovki, for short) themselves, also played host to Joseph Stalin’s most notorious prison, the gulag to which he banished many of his ideological opponents. This dual purpose has made Solovetsky Monastery a kind of Russian Golgotha, a temple-graveyard haunted by both the holy and the horrifying. Mass graves are scattered across the island. My guide summed up the experience of living here: “Wherever we go here, we feel we’re stepping on bones.”

Even from Moscow, where I live, a trip to the Solovki, almost 650 miles due north, is a long one—and tough on new arrivals. A choppy flight landed me on a runway plagued with Arctic mosquitoes; a kidney-bruising ride from the airport by four-wheel-drive van took me down a pitted dirt track into the shack-and-barrack settlement of fewer than 1,000. My hotel, tranquil and half-embowered in alder trees and birches, stood by an abandoned prison open to the winds, with skulls and crossbones still painted on cell doors. Almost everywhere I went during my stay, I heard the wind, not voices, and was alone or almost alone or felt alone—a sublime, and at times eerie, experience. But perhaps not a new one.

The prospect of solitude drew the first Russians here. Early in the 15th century, two monks debarked on the island’s northern coast, seeking a place of religious retreat amid pristine taiga and bog. They initiated cloistral traditions that led, soon after, to the founding of Solovetsky Monastery. But almost from the beginning, the Solovetsky Islands were also abodes of exile and detention. The isolation and severe climate well suited the penal needs of an authoritarian state ruled by a czar. Monks both served God and acted as prison wardens. In the monastery’s darkest corners, they built cells that would hold a spectrum of prisoners, from the dissident gentry and errant clergy, to rebellious Cossacks and Decembrist revolutionaries.

I climbed stairs above the monastery’s granary and examined a few of the cells—low, vaulted brick chambers with tiny barred windows overlooking the desolate, churning Bay of Prosperity. The experience created by the monks was easily outdone when the Bolsheviks instituted a reign of sadistic terror that earned the Solovki infamy throughout the Soviet Union. Behind glass in one of the monastery’s chilly, damp corridors, an exposition of photographs and documents displays that regime’s grisly legacy—twisted corpses strewn across fields, stacked skulls, ransacked churches, smashed church bells, and orders of execution. In 1923, the authorities reconstituted the monastery-prison (and the rest of the island) as the country’s first concentration camp, designed to “rehabilitate” the most potentially dangerous “enemies of the people”—writers, poets, academics, and anyone else who fell afoul of the revolution. During the 1930s, when Stalin and Hitler enjoyed cordial, if wary, relations, German officers visited the island and studied its “correctional” regimen, gleaning elements that they would soon put to use on a far more horrific scale.

The macabre cruelties of all the Soviet gulags have been well documented, but even so, those of the Solovki stand out. Camp officials welcomed each group of arriving inmates by immediately shooting two prisoners dead, and pummeling the rest with shovels. Locked in unheated cells in the winter, the prisoners slept in piles three or four deep for warmth. Guards doused some in water and made them huddle for hours in the cold. Of the 80,000 Soviets condemned to the Solovki between 1923 and 1939, some 40,000 died here.

Finally, even for Stalinist authorities on the mainland, the Solovki’s unsanctioned atrocities exceeded the acceptable. In 1939, the camp was closed, and some of its administrators were executed. The remaining prisoners were moved to the mainland. As another tour guide, the historian Oleg Kodola, pointed out, “By 1940, the whole country had been turned into a prison camp. It made no difference which side of the barbed wire you were on.”

It does now, of course. In 1967, Soviet authorities opened a museum in Solovetsky Monastery, and monks returned in 1990. Judging from the conservative dress of most of the Russian tourists around me in the courtyard, a good number were on a pilgrimage of sorts, something the former, atheistic regime would never have countenanced. Their presence, and that of the monks heading to church for evening services, reminds one that, to survive in the Solovki’s austere setting, faith may be the one constant.