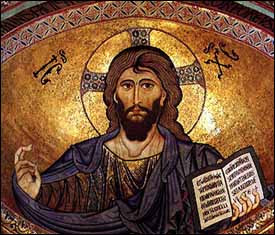 Benedict XVI reflects on Psalm 110, "a Psalm beloved by the ancient Church and by believers of all times"

VATICAN CITY, 16 NOV 2011 (VIS) - During today's general audience in St Peter's Square, attended by over 11,000 pilgrims, the Holy Father imparted the final catechesis of his cycle dedicated to the Psalms. He focused on Psalm 110, which "Jesus Himself cited, and which the authors of the New Testament referred to widely and interpreted in reference to the Messiah. ... It is a Psalm beloved by the ancient Church and by believers of all times", which celebrates "the victorious and glorified Messiah seated at the right hand of God".

The Psalm begins with a solemn declaration: "The Lord says to my lord: 'Sit at my right hand until I make your enemies your footstool". Benedict XVI explained that "Christ is the Lord enthroned, the Son of man seated at the right hand of God. ... He is the true king who by resurrection entered into glory, ... higher than the angels, seated in the heavens over all other powers, ... and with all His adversaries at His feet until the last enemy, death, is definitively defeated by Him".

God and the king celebrated in the Psalm are inseparably linked. "The two govern together, to the point that the Psalmist confirms that God Himself grants the regal sceptre, giving the king the task of defeating his adversaries. ... The exercise of power is a task the king receives directly from the Lord, a responsibility which involves dependence and obedience, thus becoming a sign to the people of God's powerful and provident presence. Dominion over enemies, glory and victory are gifts the king has received, that make him a mediator of divine triumph over evil".

The priestly dimension, linked to that of regality, appears in verse four. "The Lord has sworn and will not change his mind 'You are a priest forever, according to the order of Melchizedek'". This priest, the king of Salem, had blessed Abraham and offered bread and wine following the victorious military campaign conducted by the patriarch to save Lot from the hands of his enemies. The king of the Psalm "will be a priest forever, mediator of the divine presence among His people, a catalyst for the blessing of God". Jesus Christ "is the true and definitive priest, Who will complete and perfect the features of Melchizedek's priesthood". In the bread and wine of the Eucharist, Christ "offers Himself and, defeating death, brings life to all believers".

The final verses portray "the triumphant sovereign who, with the support of the Lord, having received power and glory from Him, opposes his enemies, defeating adversaries and judging nations".

The Church traditionally considers this Psalm as one of the most significant messianic texts. "The king as sung by the Psalmist is Christ, the Messiah Who establishes the Kingdom of God and overcomes the powers of the world. He is the Word generated by God before any creature, the Son incarnate, Who died and rose to heaven, the eternal Priest Who, in the mystery of the bread and wine, grants forgiveness for sins and reconciliation with God; the King Who raised his head in triumph over death by His resurrection".

The Psalm invites us to "look to Christ to understand the meaning of true regality which is to be lived as service and the giving of self, following a path of obedience and love 'to the end'. Praying this Psalm, we therefore ask the Lord to enable us to proceed along this same journey, following Christ, the Messiah, willing to ascend with Him on the hill of the cross to accompany Him in glory, and to look to Him seated at the right hand of the Father, the victorious king and merciful priest Who gives forgiveness and salvation to all mankind".

Finally, the Pope explained that, in the course of his catechesis dedicated to the Psalms, he had sought to focus on those "that reflect the different situations in life and the various attitudes we may have towards God. I would like to renew my call to everyone to pray the Psalms, to become accustomed to using the Liturgy of the Hours, Lauds, Vespers, and Compline. Our relationship with God can only be enriched by our journeying towards Him day after day
Posted by Father David Bird O.S.B. at 09:05