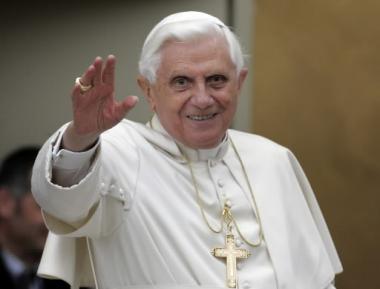 https://mail.google.com/mail/?hl=en&tab=im&q=pope%20benedict%20xvi#inbox/13133f9b3089d39b
Perhaps, however, the awarding of the prize can offer the occasion to dedicate ourselves for a moment to the fundamental question of what "theology" really is.

Theology is the science of faith, tradition tells us. But here the question immediately arises: Is this really possible? Is this not, in itself, a contradiction? Is not science, perhaps of faith? Does faith not cease to be faith when it becomes science? And does not science cease to be science when it is ordered or even subordinated to faith?

Such questions -- which already for medieval theology represented a serious problem -- with the modern concept of science, have become even more difficult, at first glance, even unsolvable. Hence we understand why in the modern age, in vast ambits, theology retracted primarily to the field of history, in order to demonstrate in this area its serious scientific nature. It is necessary to acknowledge, with gratitude, that grandiose works were carried out in this vein, and the Christian message received new light, rendering visible its profound richness. However, if theology withdraws totally into the past, it leaves faith today in darkness.

In a second phase, theology then concentrated on praxis, to show how theology, in connection with psychology and sociology, is a useful science that gives concrete indications for life. This is also important. But if faith, the foundation of theology, does not become at the same time an object of study, if praxis refers only to itself, or lives only by borrowing from the human sciences, then praxis becomes empty and deprived of foundation.

Hence, these paths are not sufficient. For as useful and important as they might be, they become escapes if the true question remains unanswered. The real question is this: Is what we believe true or not? The question of truth is at stake in theology; it is its ultimate and essential foundation.
Something Tertullian said can bring us to take a step forward here; he wrote that Christ did not say: "I am custom," but, "I am the Truth" -- non consuetudo sed veritas (Virg. 1,1).
Christian Gnilka has shown that the concept consuetudo can refer to the pagan religions that, according to their nature, were not faith, but were "custom": what is done is what has always been done; the traditional forms of worship are observed and one thus hopes to remain in the right relationship with the mysterious ambit of the divine. The revolutionary aspect of Christianity in antiquity was precisely the break with "custom" for love of the truth. Tertullian speaks here above all on the basis of the Gospel of John, in which is found the other fundamental interpretation of the Christian faith, which is expressed in the designation of Christ as Logos.

If Christ is the Logos, the truth, man must correspond to Him with his own logos, with his reason. To arrive at Christ, man must be on the path of truth. He must open himself to the Logos, to creative Reason, from which derives his own reason and to which his reason refers back. In this way we see that Christian faith, by its very nature, must give rise to theology, must question itself on the reasonableness of faith, even if, of course, the concept of reason and that of science encompass many dimensions, and thus the concrete nature of the nexus between faith and reason should and must always be plumbed anew.

Thus, even when the fundamental nexus between Logos, truth and faith is clearly presented in Christianity, the concrete form of this nexus has aroused and always arouses new questions. It is clear that at this moment such a question, which has occupied and will occupy every generation, cannot be treated in detail, and not even broadly. I would like to proposes only a very small note.

In the Prologue to his Commentary on the Sentences, St. Bonaventure spoke of a double use of reason -- of a use that is irreconcilable with the nature of faith and of a use that instead belongs precisely to the nature of faith. There exists, he says, the violentia rationis, the despotism of reason, which makes itself the supreme and ultimate judge of everything. This kind of use of reason is certainly impossible in the ambit of faith. What does Bonaventure mean by this? An expression of Psalm 95:9 can show us. Here God says to his people: "In the wilderness ... your fathers tested me, and put me to the proof, though they had seen my work." Here there is reference to a double encounter with God: they "saw." This, however, was not enough for them. They put God "to the proof." They want to subject him to experiment. He is, as it were, subjected to a questioning and must submit Himself to a procedure of experimental testing.

This way of using reason has reached the culmination of its development in the modern age in the realm of the natural sciences. Experimental reason widely seems today to be the only form of rationality declared scientific. What cannot be scientifically verified or falsified falls outside the scientific ambit. With this approach, great works have been accomplished, as we know, and no would dare to seriously deny that this approach is right and necessary in the realm of knowledge of nature and of its laws. However such a use of reason has a limit: God is not an object of human experimentation. He is Subject and manifests himself only in the person to person relationship, which is part of the essence of person.

In this perspective Bonaventure refers to a second use of reason, which is valid for the ambit of the "personal," for the great questions regarding man himself. Love wants to know better the one it loves. Love, true love, does not make one blind but seeing. Part of it is a thirst for knowledge, true knowledge of the other. Because of this, the Fathers of the Church found precursors and forerunners of Christianity -- outside the world of revelation to Israel -- not in the ambit of conventional religion, but in men searching for God, searching for truth, in the "philosophers": in persons who were thirsting for truth and hence were on the path to God.

When there is not this use of reason, then the great questions of humanity fall outside the ambit of reason and are left to irrationality. Because of this authentic theology is so important. Right faith orients reason to its openness to the divine, so that, guided by love for the truth, it can know God more closely. The initiative for this path is with God who has put in man's heart the search for his Face. Hence, part of theology, on one hand, is humility that lets itself be "touched" by God, and on the other hand, discipline that is linked to the order of reason, which preserves love from blindness and which helps to develop its strength for seeing.

I am well aware that with all this an answer has not been given to the question about the possibility and the task of correct theology. Only the greatness of the challenge innate in the nature of theology has been held up for consideration. However, it is precisely this challenge that man needs, because it pushes us to open our reason, asking ourselves about truth itself, about the face of God. That is why we are grateful to the prize winners who have shown in their work that reason, walking on the path traced by faith, is not an alienated reason but is reason that responds to its very lofty vocation. Thank you.
Posted by Father David Bird O.S.B. at 12:19