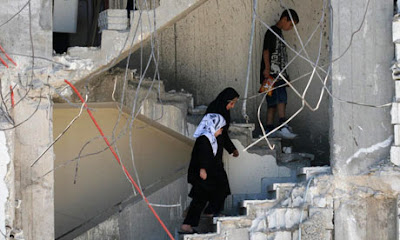 Thanks to positive intentions, open dialogue and hard work, Christians and Muslims in Yarun managed to share the same language and the same space without infringing on each others' boundaries or abusing their respective faiths. They managed to uphold this way of life for centuries, perhaps for over a millennium. Although, like their ancestors, Christian and Muslim Yarunis still live in the same village, the ratios are now grossly disproportionate: the Muslims far outweigh the Christians in numbers and wealth.
I cannot claim that Yarun's past can provide us with a model for religious tolerance. Whilst not wanting to belittle the monumental achievements of some international aid organisations and their efforts to educate developing countries, I do want to highlight that what is needed is more inducement than aid. People in developing countries do not need academic qualifications, but rather the incentive to take charge of their own development programmes.
Thus, instead of giving aid freely, charitable organisations should demand that local people build their own programmes for development and request (and be awarded) funds reflecting the strength of their applications. This would instigate dialogue between community members and it would give locals ownership of their own projects. If we continue simply to give, we risk creating a culture that expects constant handouts, which in turn leads to disgruntled and unsatisfied communities. We should, for example, look at projects such as Katine, which was launched by the Guardian and the Observer in indigenous Africa, and build on what they have learned.
Egypt's Muslims attend Coptic Christmas mass, serving as "human shields"

Egypt’s majority Muslim population stuck to its word Thursday night. What had been a promise of solidarity to the weary Coptic community, was honoured, when thousands of Muslims showed up at Coptic Christmas eve mass services in churches around the country and at candle light vigils held outside.
From the well-known to the unknown, Muslims had offered their bodies as “human shields” for last night’s mass, making a pledge to collectively fight the threat of Islamic militants and towards an Egypt free from sectarian strife.
“We either live together, or we die together,” was the sloganeering genius of Mohamed El-Sawy, a Muslim arts tycoon whose cultural centre distributed flyers at churches in Cairo Thursday night, and who has been credited with first floating the “human shield” idea.
Among those shields were movie stars Adel Imam and Yousra, popular preacher Amr Khaled, the two sons of President Hosni Mubarak, and thousands of citizens who have said they consider the attack one on Egypt as a whole.
“This is not about us and them,” said Dalia Mustafa, a student who attended mass at Virgin Mary Church on Maraashly. “We are one. This was an attack on Egypt as a whole, and I am standing with the Copts because the only way things will change in this country is if we come together.”
In the days following the brutal attack on Saints Church in Alexandria, which left 21 dead on New Year’ eve, solidarity between Muslims and Copts has seen an unprecedented peak. Millions of Egyptians changed their Facebook profile pictures to the image of a cross within a crescent – the symbol of an “Egypt for All”. Around the city, banners went up calling for unity, and depicting mosques and churches, crosses and crescents, together as one.
The attack has rocked a nation that is no stranger to acts of terror, against all of Muslims, Jews and Copts. In January of last year, on the eve of Coptic Christmas, a drive-by shooting in the southern town of Nag Hammadi killed eight Copts as they were leaving Church following mass. In 2004 and 2005, bombings in the Red Sea resorts of Taba and Sharm El-Sheikh claimed over 100 lives, and in the late 90’s, Islamic militants executed a series of bombings and massacres that left dozens dead.
This attack though comes after a series of more recent incidents that have left Egyptians feeling left out in the cold by a government meant to protect them.
Last summer, 28-year-old businessman Khaled Said was beaten to death by police, also in Alexandria, causing a local and international uproar. Around his death, there have been numerous other reports of police brutality, random arrests and torture.
Last year was also witness to a brutal parliamentary election process in which the government’s security apparatus and thugs seemed to spiral out of control. The result, aside from injuries and deaths, was a sweeping win by the ruling party thanks to its own carefully-orchestrated campaign that included vote-rigging, corruption and rife brutality. The opposition was essentially annihilated. And just days before the elections, Copts - who make up 10 percent of the population - were once again the subject of persecution, when a government moratorium on construction of a Christian community centre resulted in clashes between police and protestors. Two people were left dead and over 100 were detained, facing sentences of up to life in jail.
The economic woes of a country that favours the rich have only exacerbated the frustration of a population of 80 million whose majority struggle each day to survive. Accounts of thefts, drugs, and violence have surged in recent years, and the chorus of voices of discontent has continued to grow.
The terror attack that struck the country on New Year’s eve is in many ways a final straw – a breaking point, not just for the Coptic community, but for Muslims as well, who too feel marginalized, persecuted, and overlooked, by a government that fails to address their needs. On this Coptic Christmas eve, the solidarity was not just one
Posted by Father David Bird O.S.B. at 19:08