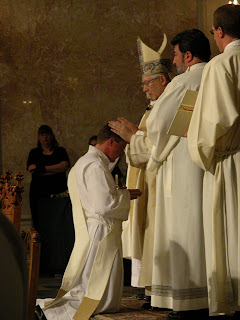 >
>
>
> * DATE: *April 16, 2010
>
>
> *FROM: *Don Clemmer
>
> *O:* 202-541-3206
> *M:* 260-580-1137
>
> * FOR IMMEDIATE RELEASE*
>
> *ORDINATION CLASS OF 2010 COMPLETED COLLEGE, HELD JOBS, PARTICIPATED
> IN PARISH MINISTRY BEFORE ENTERING SEMINARY*
> * *
> WASHINGTON—The vast majority (92 percent) of men being ordained to the
> priesthood report some kind of full-time work experience prior to
> entering the seminary, most often in education. Three in five (60
> percent) ordinands completed college before pursuing the priesthood,
> with one in five (20 percent) also receiving a graduate degree. One in
> three (34 percent) entered the seminary while in college.
> The median age of ordinands is 33. The youngest member of
> the Class of 2010 is 25; 11 men are being ordained at the age of 65 or
> older. On average, men were 18 when they first considered their vocation.
> This analysis is part of /The Class of 2010: Survey of
> Ordinands to the Priesthood/, an annual national survey of men being
> ordained priests, conducted by the Center for Applied Research in the
> Apostolate (CARA), a Georgetown University-based research center. The
> entire report can be found at www.usccb.org/vocations/classof2010
> <http://www.usccb.org/vocations/classof2010>, as well as on the new
> www.ForYourVocation.org <http://www.foryourvocation.org/> which is set
> to launch on April 25, Good Shepherd Sunday and the World Day of
> Prayer for Vocations. The survey was commissioned by the United States
> Conference of Catholic Bishops (USCCB).
> “One important trend evident in this study is the
> importance of lifelong formation and engagement in the Catholic
> faith,” said Cardinal Sean P. O'Malley of Boston, chairman of the U.S.
> Bishops' Committee on Clergy, Consecrated Life and Vocations. He noted
> that, along with their education and work experience, half to
> three-quarters of the Class of 2010 report they served as an altar
> server, lector, Eucharistic minister or other parish ministry.
> “Most ordinands have been Catholic since birth,” said
> Cardinal O’Malley, “Four in five report that both their parents are
> Catholic. Almost eight in 10 were encouraged to consider the
> priesthood by a priest. This speaks to the essential role the whole
> Church has to play in fostering vocations.”
> The survey had a response rate of approximately 77 percent
> of the 440 potential ordinands reported by theologates, houses of
> formation, dioceses, and religious institutes. They included 291 men
> being ordained for dioceses and 48 for religious orders, such as the
> Jesuits, Dominicans and Franciscans.
> In other findings, CARA reported:
> · Close to two in five (37 percent) have a relative who is a
> priest or religious.
> · Two thirds report regularly praying the rosary (67 percent)
> and participating in Eucharistic Adoration (65 percent) before
> entering seminary.
> · More than half of ordinands (55 percent) report having more
> than two siblings, while one-quarter (24 percent) report having five
> or more siblings. Two in five (38 percent) are the oldest child in
> their family.
> · Seven in 10 report their primary race or ethnicity as
> Caucasian/European American/white (70 percent). Compared to the adult
> Catholic population of the United States, ordinands were more likely
> to be Asian or Pacific Islander (10 percent of responding ordinands),
> but less likely to be Hispanic/Latino (13 percent). Compared to
> diocesan ordinands, religious ordinands are less likely to report
> their race or ethnicity as Caucasian/European American/white.
> · Nearly one-third (31 percent) of the ordination class of
> 2010 was born outside the United States, the largest numbers coming
> from Mexico, Colombia, the Philippines, Poland and Vietnam. Between 20
> and 30 percent of ordinands to the diocesan priesthood for each of the
> last 10 years were born outside the United States.
> · Eight in 10 (85 percent) report they have seen the “Fishers
> of Men” DVD published by the USCCB.
> ---
> Keywords: Class of 2010, ordinands, ordination, priesthood, religious,
> diocesan, clergy, seminary, Center for Applied Research in the
> Apostolate, Cardinal Sean O’Malley, Committee on Clergy, Consecrated
> Life and Vocations
> # # # # #
> 10-070
> SEC,DD,CNS,RNS,Crux
>
>
> If you would rather not receive future communications from U.S
> Conference of Catholic Bishops, let us know by clicking here.
> <http://usccb.pr-optout.com/OptOut.aspx?515580x25090x28435x1x3541576x24000x6&Email=the.avatar%40worldnet.att.net>
> U.S Conference of Catholic Bishops, 3211 4th St., NE, Washington, DC
> 20017-1194 United States
Posted by Father David Bird O.S.B. at 10:08