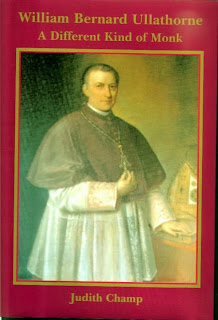 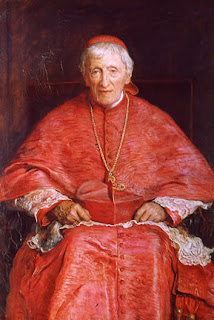 A Sermon given by Abbot Paul at Birmingham Oratory.

"I will give you another Advocate to be with you for ever, the Spirit of truth."

In 2006 the Church in England and Wales, and the Archdiocese of Birmingham and the English Benedictine Congregation in particular, celebrated the the bicentennial of the birth of William Bernard Ullathorne. To mark the occasion we have been especially blessed with the publication of Dr Judith Champ's excellent biography "A Different Kind of Monk", a long overdue re-appreciation of the life, work and importance of Ullathorne, founding father of this great Archdiocese and greatest among the many great bishops of the Catholic Church in 19th century Britain.

Ullathorne was a different kind of monk if you consider the romantic movement for monastic reform spearheaded by Solesmes, Beuron and Subiaco to be the norm, and yet in so many ways he is absolutely typical of the English Benedictine Congregation. Since its re-emergence on the continent at the beginning of the 17th century the EBC was fired on the one hand with love for the monastic ideal, yet at the same time accepted a fourth vow of obedience to the Holy Father to return to these shores, like St Augustine of Canterbury, to reconvert the English and the Welsh to the Catholic faith. Many of our young men, missionary monks, were destined to become martyrs and saints, while others, through the pastoral work of a lifetime, helped rebuild the Church in our land while looking forward to the day when she would be free again.


Trained in the cloister at Downside, Ullathorne was prepared for the solitary life of a missioner through the daily practice of mental prayer and spiritual reading. Whether in Australia or in the West Midlands, he became, through work and prayer, a man of God, a holy man. Bishop Cuthbert Hedley of Newport, an Ampleforth monk (Belmont Abbey was his cathedral), gave his homily at Ullathorne's Requiem at St Chad's Cathedral the title "A Spiritual Man", and so he was. This too is a homily and not a lecture, so I must limit myself to commenting briefly on the scripture readings we have heard, applying them to Ullathorne and to his good friend Cardinal John Henry Newman. In many ways they were very different - in family background, early upbringing, education, work experience, character and churchmanship. In many ways they were also very similar - with a deep devotion to the Church, to God's people and to Rome, a tender love for Christ, an overpowering interest in theology and an intensive life of prayer. Such similarities and differences, taken together, show how catholic the Church can and should be.
"On him the spirit of the Lord rests, a spirit of wisdom and insight, a spirit of counsel and power, a spirit of knowledge and of the fear of the Lord." What unites Christians to God and to each other is that sense of vocation and conversion, which comes with the gift of the Holy Spirit. Likewise the efficacy of a priestly vocation derives ultimately from that profound experience of the Spirit of the Lord who transforms our hearts and minds and brings about the metanoia that leads one to acknowledge with St Paul that, "it is not I who live, but Christ who lives in me." What makes both Newman and Ullathorne truly great as Christians, priests, pastors and communicators of God's will and love for mankind is that total self-giving or humility which allowed the Holy Spirit to do Christ's work in them.

"Truly the fear of the Lord was their breath." They were both acutely aware of Christ's saving presence in the Church and in the sacraments, in their neighbour and in themselves. In awe they worshipped the living God.
"The Spirit comes to help us in our weakness; when we cannot choose words to pray properly, the Spirit himself expresses our plea in a way that cannot be put into words." Prayer, vocal and intercessory, the Prayer of the Church, the Mass and the Breviary, these were daily bread for Newman and Ullathorne, and both in their own way had a gift for words, whether spoken or written. Both were theologians, men who spoke of God to others because they spoke with God in prayer. No-one, of course, would compare Ullathorne with Newman, who is undoubtedly the greatest theologian of the 19th century, yet Ullathorne was well aware that a bishop's primary task is to read widely and to pray constantly, and only then communicate the depth and purity of the Church's teaching in an intelligible way to his people.

Both Newman and Ullathorne were men of prayer and both knew that ultimately God reveals himself in the prayer of silent adoration, in contemplation. Ullathorne, as a monk, a missionary and a bishop, and Newman, first of all in his Anglican days and then as a Catholic and as an Oratorian, throughout his life as a scholar and a thinker, were both contemplatives, for both knew that their strength lay in walking with Christ to a lonely place and there passing the night in prayer. Just as the Lord Jesus revealed his divine sonship in that personal and intimate relationship with the Father in the prayer of solitude and silence, so Newman and Ullathorne reveal their true identity as disciples of Jesus in their assiduous and faithful practice of mental prayer, so loved by the English Mystics of old and practised in their day and in ours by the Benedictine nuns of Colwich and Stanbrook, following the teaching of Dom Augustine Baker.
There can be no theology which is not the fruit of prayer and suffering. Both Newman and Ullathorne knew the suffering of rejection and misunderstanding, and both were keenly aware of their personal weakness and need for God


"If you love me you will keep my commandments." As a young man Ullathorne had taken the three traditional monastic vows of obedience, conversatio morum and stability. He had also made that fourth promise of specific obedience to the Holy Father to work on the missions, a promise which he fulfilled both as Vicar General in Australia and as Vicar Apostolic and Bishop in the heart of England. His obedience was neither blind nor childlike, but rather intelligent and objective. He was a pragmatist and a realist. Newman, on becoming a Catholic, pledged obedience to the Pope and to the Church. He promised to profess her faith and uphold her teaching. Later, when he became a priest, he promised to teach that faith in obedience to the Magisterium, yet his obedience too was intelligent and adult, an obedience that always searches for the Truth, the Truth who is Christ himself, the Truth that sets us free.


"You know him because he is with you and he is in you." In the final analysis a saint is a Christian who knows God, for to know God is to see him and to love him. Ullathorne and Newman knew God and that is what still attracts us to them today. In their lives and in their work we see hand of the living God. All those who love Cardinal Newman and long to see him raised to the altars have recently been overjoyed by the news of a possible miracle. Tonight I would propose, and I know that is it right and just to do this, that we should begin to work as well for the beatification of William Bernard Ullathorne. What more attractive and worthy a candidate could there be? If we were the Church in Spain or in Italy Newman and Ullathorne and Manning too would all by now have been canonised. Now they didn't always get on nor were their views always appreciated by their fellow bishops or even in Whitehall. They certainly weren't plaster model saints, but they were real men and certainly, all three of them, outstanding in holiness, the great fathers of the modern English Church and an example we can follow today. How I wish they were with us still.

"I shall ask the Father and he will send you another Advocate to be with you for ever." The presence of these great men, thanks to the Holy Spirit, is still with us in the Church today. May they now intercede for us in heaven and help us reap new blessings for the Church they loved so passionately and love still, the Church they served so faithfully and serve still. Britain is ripe today for a Third Spring. May their prayers and example, and our willingness to follow in their footsteps, hasten that great Catholic Revival for which we long, work and pray.
To Father, Son and Holy Spirit, three Persons in one God, be all honour, praise and glory, world without end. Amen

Email ThisBlogThis!Share to TwitterShare to FacebookShare to Pinterest
Labels: Sermon by Abbot Paul on Ullathorne and Newman