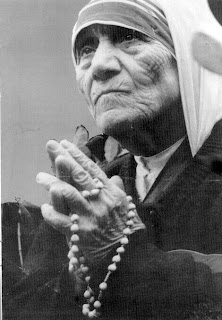 Mother Teresa was not a Benedictine, but she was one chosen by God to be a model in the twentieth century of what it means "to seek God", which is why we have an article on her here. Christian love, in its very essence, is not a matter of feelings but of the synergy, or harmony, between the Holy Spirit and our own human will. At the time Jesus was perfectly fulfilling the will of his Father in love, he exclaimed, "My God, my God, why have you forsaken me!". Similarly, St Paul wrote to the Corinthians a passage that describes Mother Teresa's vocation exactly:
"We are afflicted in every way...always carrying in the body the death of Jesus, so that the life of Jesus may also be made visible in our bodies. For while we live, we are always being given up to death for Jesus' sake, so that the life of Jesus may be made visible in our mortal flesh. So death is at work in us, but life in you." (2 Cor. 4. vv 7 - 12)

For over forty years, from the time she responded to Christ's call to leave all to share the life of the poorest of the poor, Mother Teresa lived in a most terrible desolation, all the more painful because of her previous close contact with Jesus. Her religious emotions were dead. But millions of others saw the face of the risen Christ in her even though she could not see him herself. She never stopped seeking him in front of a closed door; yet many people found in her the door that led straight to him. Death was at work in her so that life could be at work in those she met or even only saw her photo. Desolation was the cost of spiritual motherhood.

Mother Teresa, with her words:

How to love God

My Catholic Faith by Mother Teresa

The Secret Life of Mother Teresa


The Secret Life of Mother Teresa (2)

Email ThisBlogThis!Share to TwitterShare to FacebookShare to Pinterest
Labels: Mother Teresa's life and teaching through videos