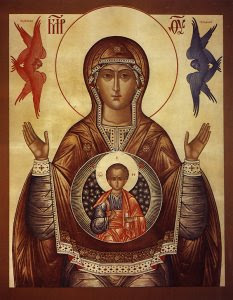 "The Cross of Christ on Calvary stands beside the path of that admirable commercium, of that wonderful self-communication of God to man, which also includes the call to man to share in the divine life by giving himself, and with himself the whole visible world, to God, and like an adopted son to become a sharer in the truth and love which is in God and proceeds from God. It is precisely besides the path of man's eternal election to the dignity of being an adopted child of God that there stands in history the Cross of Christ, the only-begotten Son..." — Pope John Paul II, Dives in Misericordia, 7.5.

"Love of God and love of neighbour are thus inseparable, they form a single commandment. But both live from the love of God who has loved us first. No longer is it a question, then, of a 'commandment' imposed from without and calling for the impossible, but rather of a freely-bestowed experience of love from within, a love which by its very nature must then be shared with others. Love grows through love. Love is 'divine' because it comes from God and unites us to God; through this unifying process it makes us a 'we' which transcends our divisions and makes us one, until in the end God is 'all in all' (1 Cor 15:28)." —Pope Benedict XVI, Deus Caritas Est, 18
hat, really, is the point of Christmas? Why did God become man?

The Catechism of the Catholic Church, in a section titled, "Why did the Word become flesh?" (pars 456-460) provides several complimentary answers: to save us, to show us God's love, and to be a model of holiness. And then, in what I think must be, for many readers, the most surprising and puzzling paragraph in the entire Catechism, there is this:

The Word became flesh to make us "partakers of the divine nature": "For this is why the Word became man, and the Son of God became the Son of man: so that man, by entering into communion with the Word and thus receiving divine sonship, might become a son of God." "For the Son of God became man so that we might become God." "The only-begotten Son of God, wanting to make us sharers in his divinity, assumed our nature, so that he, made man, might make men gods." (par 460)

So that "we might become God"? Surely, a few might think, this is some sort of pantheistic slip of the theological pen, or perhaps a case of good-intentioned but poorly expressed hyperbole. But, of course, it is not. First, whatever problems there might have been in translating the Catechism into English, they had nothing to do with this paragraph. Secondly, the first sentence is from 2 Peter 1:4, and the three subsequent quotes are from, respectively, St. Irenaeus, St. Athanasius, and (gasp!) St. Thomas Aquinas. Finally, there is also the fact that this language of divine sonship—or theosis, also known as deification—is found through the entire Catechism. A couple more representative examples:

Justification consists in both victory over the death caused by sin and a new participation in grace. It brings about filial adoption so that men become Christ's brethren, as Jesus himself called his disciples after his Resurrection: "Go and tell my brethren." We are brethren not by nature, but by the gift of grace, because that adoptive filiation gains us a real share in the life of the only Son, which was fully revealed in his Resurrection. (par 654)

Our justification comes from the grace of God. Grace is favor, the free and undeserved help that God gives us to respond to his call to become children of God, adoptive sons, partakers of the divine nature and of eternal life. (par 1996)

Filial adoption, in making us partakers by grace in the divine nature, can bestow true merit on us as a result of God's gratuitous justice. This is our right by grace, the full right of love, making us "co-heirs" with Christ and worthy of obtaining "the promised inheritance of eternal life." The merits of our good works are gifts of the divine goodness. "Grace has gone before us; now we are given what is due.... Our merits are God's gifts." (par 2009)

The very first paragraph of the Catechism, in fact, asserts that God sent his Son so that in him "and through him, he invites men to become, in the Holy Spirit, his adopted children and thus heirs of his blessed life." God did not become man, in other words, to just be our friend, but so that we could truly and really, by grace, become members of his family, the Church. Christmas is the celebration of God becoming man, but it is also the proclamation that man is now able to be filled with and to share in God's own Trinitarian life.(Taken from an article, "Theosis: The Reason for the Season | Carl E. Olson | December 30, 2008 | Ignatius Insight".

Boris Cristoff sings from the Liturgy
Posted by Father David Bird O.S.B. at 07:23

Email ThisBlogThis!Share to TwitterShare to FacebookShare to Pinterest
Labels: "Theosis" in East and West.