INTRODUCTION TO THIS EDITION 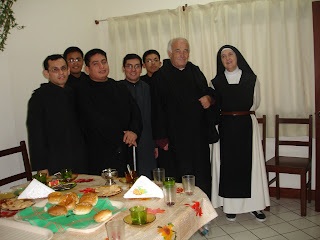 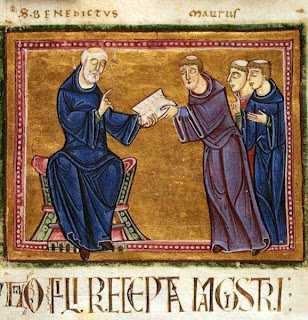 We are not the only English foundation of Benedictines in Peru. The community of Tyburn Convent in London has been here longer than we have. In fact, it was at their suggestion that the Archbishop of Piura should ask the Abbot of Belmont to send monks to make a foundation. That was back in 1980, and a lot of water has passed under the bridge since then. We have moved after many years in Tambogrande to Lima, while the Tyburn nuns moved from Piura to Sechura. I gave them their retreat a year or so ago. They have also made two more foundations, one in Columbia and one in Ecuador. D. Alex. who is in solemn vows and is trying to balance his monastic life, his job as bursar and his life as a student of philosophy at "The Faculty", originally made contact with us in Sechura. We owe the good sisters of Tyburn a lot. Anyway, in homage to them I publish a short video on their foundation in Columbia. They are neighbours of the Benedictine abbey of Guatapé, which has also helped us in many ways.

As I write, Fr Paul Stonham, Abbot of Belmont, is here. He is going this afternoon to visit Fr Joseph whom we left behind in the tropical north to care for his parish near Tambogrande. When we made our move to Lima we did not have the heart to abandon the people of Cruceta; sao Fr Joseph lives with his cat and looks after the parish. The abbot comes quite frequently to Latin America because he represents the interests of monasteries in this region in a fund, called AIM, by which rich monasteries in the first world help poor ones in the third.

We have also had two three month visits from Fr Francis McKenna who is helping us out in many ways, especially in the choir and in the kitchen: his cooking is as good as his singing!!

My next edition of this blog will be written at Belmont. My book "Heaven Revealed. The Holy Spirit and the Mass" is being launched at Belmont
and published by Gracewing on November 27th. I am writing a third on the Sacraments of Initiation, but it doesn´t yet have a title. At Belmont I shall have of time to talk with Br Juan of this monastery who is doing his noviciate under the expert guidance of Fr Brendan. In January I hope to spend some time hearing confessions of people who visit the Basilica of St Paul-Outside-the Walls in Rome. In that case, this blog will have a definitely Roman look in January.

Ever since we arrived at Pachacamac in August, 2006, we have had a problem. A man with the same family name as St Martin of Lima had invaded the high ground adjacent to the land we had bought and claimed it for himself. This land officially belongs to the state but was normally given to the owner of the habitable lower land next to it, and we plans to build our monastery on it. In fact, we had possession, but he went with people, threatened the watchman who fled, burned down his house and said that it had always been his. Both sides appealed to the Law, and the fiscal ruled that neither side should enter until the dispute had ended. Both sides signed a paper to that effect, but he remained where he was. People like him thrive because of three factors. Firstly, most people do not have papers to prove that the land they live on or use for agriculture is really theirs. Secondly, the law is slow and extremely complicated: the laws governing land have changed radically three times in three years, so that the lawyers often do not know what the latest law is and are not sure how it is to be interpreted, even if they know it; and the authorities that administer the law have totally changed twice in the same period. Thirdly, most people do not have the money, the patience or the self-confidence to defend themselves. The man who invaded the land that would have normally been ours has a long record of disputes with other people over the same kind of thing. That is how he earns his living; but he has managed to stay out of prison. Mostly, people are willing to pay him to leave or he keeps the land unopposed. He is even in dispute with h9is own family!! When we took him on, many people who have been his victims hoped that he would lose this one. After three years in which his lies had to be investigated, he did lose, and he has received a suspended sentence of two years. About four months later - Peruvian legal processes are extremely SLOW - the judge´s secretary went with our lawyers to the area and we were formally given the administration of the land; but we now have to buy it from the state, even though formally, under the old laws, we would have been given it if all this hadn´t happened. I hope we can find the money.

Email ThisBlogThis!Share to TwitterShare to FacebookShare to Pinterest
Labels: www.monasteriodelaencarnacion.org