POPE: MASS IN THE VERNACULAR HELPS PEOPLE TO UNDERSTAND GOD AND TO LIVE THEIR FAITH

By Carol Glatz
Catholic News Service March 9, 2015
ROME — Allowing priests to celebrate Mass in the language of the local congregation rather than in Latin allowed the faithful to understand and be encouraged by the word of God, Pope Francis said.

“You cannot turn back, we have to always go forward, always forward and who goes back is making a mistake,” he told parishioners after commemorating the 50th anniversary of the first time a pope celebrated Mass in the vernacular following the Second Vatican Council.

“Let us give thanks to the Lord for what he has done in his Church in these 50 years of liturgical reform. It was really a courageous move by the Church to get closer to the people of God so that they could understand well what it does, and this is important for us: to follow Mass like this,” he said as he left Rome’s Church of All Saints March 7.

On the same date in 1965, Blessed Paul VI publicly celebrated Mass in Italian for the first time in accordance with the norms established by the Second Vatican Council.

In his homily at the parish, Pope Francis said people need to be able to connect the liturgy to their own lives.

“The liturgy isn’t something odd, over there, far away” that has no bearing on one’s everyday life, he said.

“The Church calls us to have and promote an authentic liturgical life so that there can be harmony between what the liturgy celebrates and what we live out” with the aim of expressing in life what has been received in faith.

He said the Second Vatican Council’s Constitution on the Sacred Liturgy, “Sacrosanctum Concilium,” defined the liturgy as “the primary and indispensable source from which the faithful are to derive the true Christian spirit.”

While the liturgy is, in part, about doctrine and ritual, its real essence is to be “a source of life and light for our journey of faith,” he said.

Going to church is not just about observing one’s duty and “feeling right with a God who then must not be too ‘bothersome’ ” afterward in one’s daily life, he said.

People go to church “to encounter the Lord and find in his grace at work in the sacraments the strength to think and act according to the Gospel,” he said. 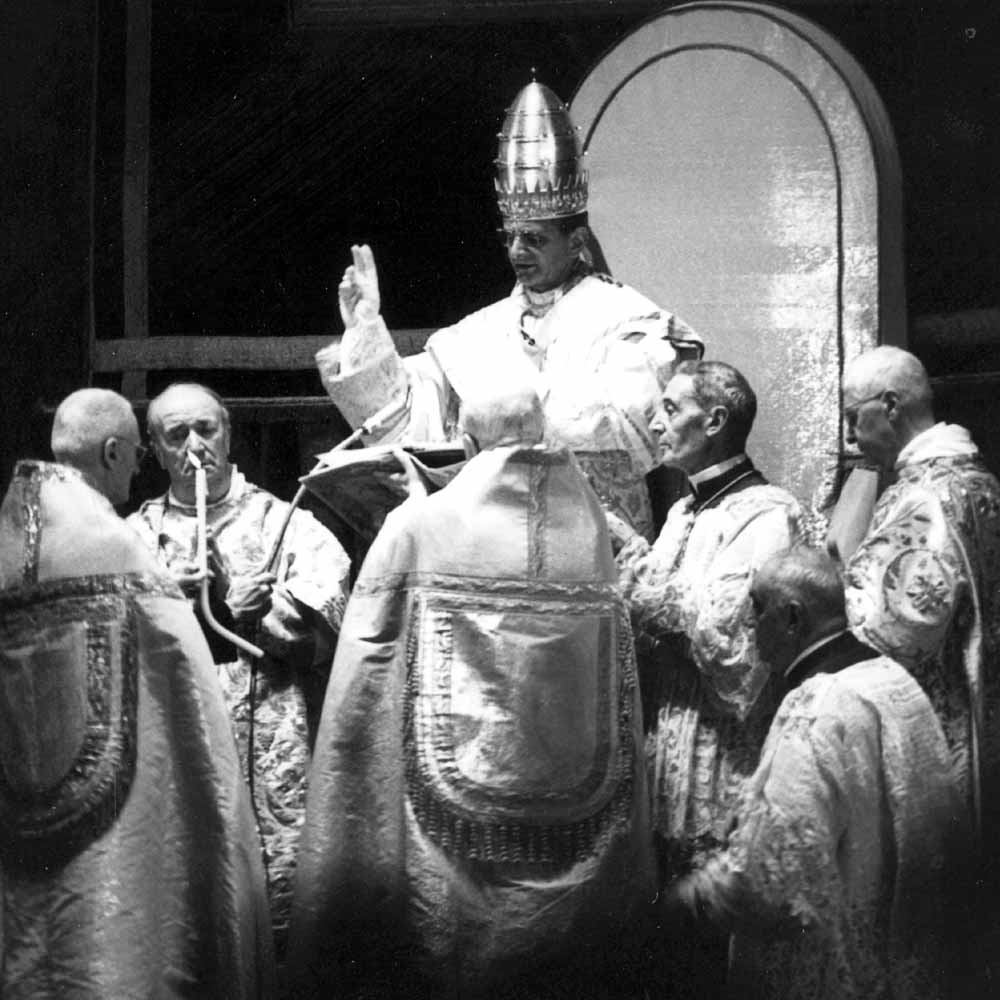 “Therefore, we cannot fool ourselves, entering into the Lord’s house, and, with prayers and devotional practices, ‘covering up’ behaviors that are contrary to the demands of justice, honesty and charity toward others,” Pope Francis said.

Authentic worship and liturgical celebrations should lead people toward “a real conversion” of heart by letting them hear “the voice of the Lord, who guides them along the path of rectitude and Christian perfection.”

Just like Jesus sought to “cleanse” or purify the temple by driving out the moneychangers, people must continue to be committed to “the purification and inner cleansing of the Church,” the pope said, so that it be a spiritual place and not a superficial place of worship “made of material sacrifices and based on personal interests.”

The pope said he hoped that commemorating the first papal Mass in the vernacular rather than Latin would remind people that the house of God is meant to be a source of spiritual strength, where they can hear his word and feel “not like foreigners but as brothers and sisters” who are united in their love for Christ.