THE TRADITIONAL LATIN LITURGY IN ITS POST-VATICAN Ii FORM - I: AN INTRODUCTION by Louis BouyerI 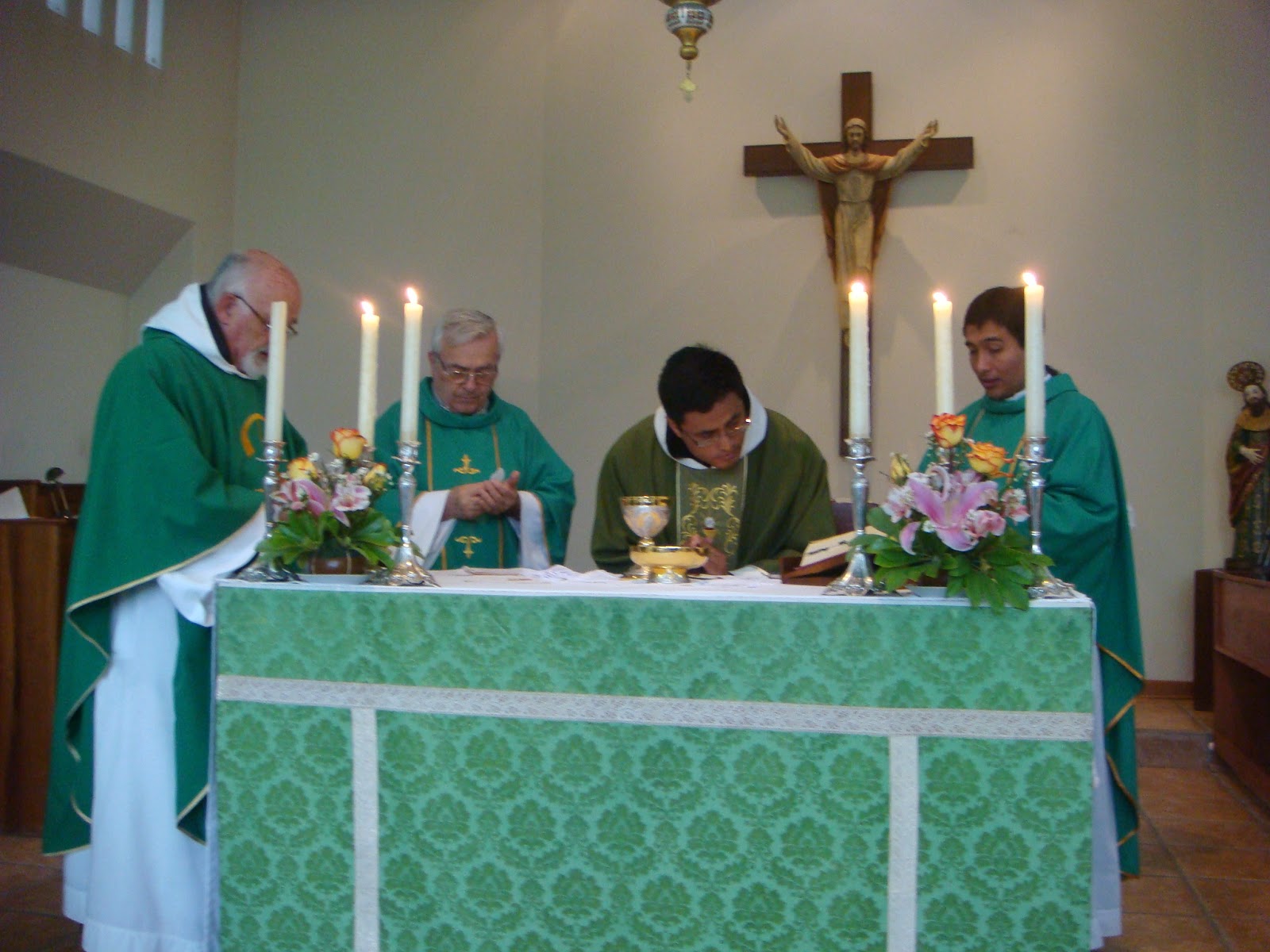 Liturgy, by definition, is traditional. One essential characteristic of any Catholic liturgy is that it is  the principle transmission of Tradition in the Catholic Church, a Tradition that began with Christ and the Apostles and has continued without interruption until the present day and is now expressed, revealed, manifested in the post-Vatican II liturgy, having been accepted with joy as such by the Latin bishops and having been celebrated by the Latin Church from that time on.   That is all that is needed for the liturgy to be traditional, just as traditional, from a theological point of view, as what we now call the extraordinary form of the Latin Rite.

Louis Bouyer is one of the architects of the "new liturgy".   He was a strong advocate of change before the Council, with arguments that remain valid today.  He, together with Dom B. Botte OSB, contributed the Eucharistic Prayer II.  However, he became disillusioned with the way things turned out.   He resigned from the commission charged with the post-Vatican II reforms, not because he came to the opinion that reform of the liturgy is wrong, but because, like all the ressourcement school, his fundamentally basic theological insight, the one that shaped his whole approach to theology, was the importance of Tradition (formed by the synergy of the work of the Holy Spirit and the Church's humble obedience.) While the texts of the new eucharistic prayers were written within the Tradition, much of the subsequent work was based on the desire to stress human solidality over sacredness and led to practices, like "Mass facing the people" which he held strongly to be against Tradition.   Therefore, against the implications of many "conservative" bloggers, he was in no way against liturgical reform.   On the contrary, he advocated it and considered it necessary, as did others of his pursuasion like Henri de Lubac and Pope Benedict etc. In fact, Pope Benedict does not see eye to eye with the likes of Fr Z in this; but he does strongly hold that Fr Z should feel at home in the Church.  The main complaint against the new liturgy was the loss of a sense of sacredness.    In fact, this was not just a complaint about taste or a criticism of a theological position (which it was and is), but comes from the conviction that modern man is losing the faith because he has no opportunity to experience the sacred. To change the liturgy from a meeting with the Other in Christ into an experience of human togetherness (in Christ, of course) meant that the Church lost a great opportunity to reclaim the mass of the people for Christ and it is a main cause of modern infidelity.   True Christian togetherness is the fruit of a communal experience of the "Other" in Christ, not something sought for its own sake. (We shall touch on "Mass facing the people" in my closing comments.)

You will notice Bouyer's constant appeal to Tradition in his analysis of the new Eucharistic prayers.   They were composed in the name of Tradition and have every claim to be recognised as traditional in content, even though they are new.

Vatican "conservatives" before and after the Council looked on Tradition as a progressive elaboration and clarification of the Truth, so that texts from the past were interpreted in the light of our present understanding, protected as it is by infallibility.   On the contrary,the ressourcement theologians said that the Holy Spirit has had the same relationship to the Church from the time of the apostles to the present day, and the understanding of the present age has to be judged in the light of what the Church has done, said and understood in obedience to the Holy Spirit all down the ages.   Hence, if you have a problem, like the Papacy with the Orthodox, you don't just keep thumping the Vatican I drum: you go back in time to when the two churches were united and see how Vatican I can be interpreted by a Church that breathed with two lungs.   If you have a need to compose new eucharistic prayers, you don't just invent them: you compose them with material taken from Tradition.   The Orthodox-Catholic dialogue illustrates the ressourcement principles at work on the Papacy, while the new eucharistic prayers illustrate the ressourcement principles in liturgy.

We are now in position to give you these quotations from Louis Bouyer's book  "Eucharist".   They shall be printed in yellow, while my comments shall continue to be written in white.

REASONS FOR THE NEW EUCHARISTIC PRAYERS:

Beyond this immediate pastoral necessity, more far-reaching considerations militated in favour of such an initiative.   What we continue to call the "Roman liturgy" has in effect become since the time of Gregory VII the liturgy of almost the whole Latin Church.  In modern times, the missionary spread of Catholicism has implanted it throughout the known world.   Surely, as we have said, this did not come about without its having in turn absorbed all sorts of elements from the ancient Gallican liturgies.   But the canon, with the exception of a few prefaces, has remained one of the rare elements that are exclusively Roman.   It was highly desirable then, first of all, to reintroduce into it the best of the traditional treasure of the Celtic, Hispanic and Gallican eucharists.   And it was equally as desirable that this liturgy, which in fact had become universalised in its use, open wide its doors both to what we still have of the forms of the eucharist of the first centuries and to the most fruitful developments of Eastern tradition.   Yet it seemed necessary, so as not to confuse the faithful, to retain in these renewed eucharists certain of the most salient elements of the Roman Canon's structure, particularly the distinction (which, as we saw, was original) between a properly consecratory epiclesis, corresponding to the Abodah prayer of the synagogue, retained before the institution narrative and the communion epiclesis at the conclusion of the anamnesis.   In addition to this reservation, it was thought more pedagogical in these new prayers to group all the intercessions and commemorations in the last part of the prayer as the Eastern tradition does.

These arguments correspond very accurately to what I was told at the time when, as a young student of theology, I searched for reasons among the great and the good.   During the first years, I visited the monastery of Chevetogne in Belgium.   Towards the end of the Council I spent a week at the Institut Saint-Serge for its justifiably famous "Semaine Liturgique", travelling each day on the Paris underground with Dom B. Botte who would later help compose Eucharistic Prayer II.  Later, in 1977, I spent six months at Sant' Anselmo where I got to know Dom Cyprian Vagaggini who wrote Eucharistic Prayer III together with Pope Paul VI.   From all these encounters, I came to realise the general preoccupation among liturgists of the way the Roman rite had ceased to be the rite of a regional church and had obliterated some other equally important more localised rites.   Not only that, it had spread beyond its natural borders to become a universal rite at the expense of others.   This led to an impoverishment of Catholic Tradition.   Most of all, as the Melkite bishops pointed out at the Council, there were all kinds of arguments in favour of introducing an epiclesis  into the Roman Rite, not least for the undeveloped state of our understanding of the role of the Holy Spirit in comparison with the Church of the Fathers.   Thus, for reasons of liturgical ecology, trying to undo the harm that was done to the richness if Catholic Tradition by an over-assertive Rome, and in an effort to restore to Catholic consciousness an appreciation of the work of the Holy Spirit and of our participation in the life of the Holy Trinity, several new eucharistic prayers were adopted.

Because of the recuperation of various aspects of Tradition that had been allowed to sink into oblivion, the adoption of the "new liturgy" after Vatican II made the Catholic west more traditional, not less, especially after Pope Benedict sanctioned the use of the extraordinary use of the Roman rite.

When Tradition is triumphant, then diversity in unity becomes the rule.  The Holy Spirit os in charge.   When unity supresses diversity, in Catholicism or Orthodoxy, then the Church begins to take on itself the characteristics of a sect, defending itself at the expense of charity.   When diversity rules at the expense of unity, then the Church loses its contact with Tradition and begins to look like liberal Protestantism, ineffective and bland.   Vatican II took the more difficult path, the only way open to it, the way of the Holy Spirit.

The video by Fr John Behr on "The Shocking Truth about Christian Orthodoxy" is as true about the Catholic Church and the Orthodox Church.  Well worth watching if you haven't seen it already.   We leave adherence to the Truth as seen from only one point of view to heretics and schismatics.   Listen to this lecture and tell me what you think.
v>
next: THE "NEW" LITURGY by Louis Bouyer - II: EUCHARISTIC PRAYER II IN DETAIL
Posted by Father David Bird O.S.B. at 11:44