DUNS SCOTUS AND THE IMMACULATE CONCEPTION by David Torkington 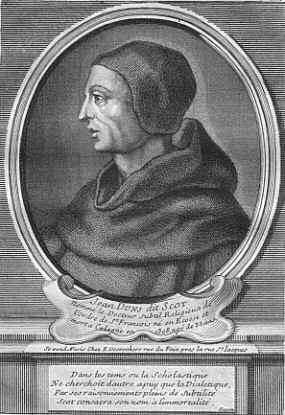 Blessed John Duns Scotus saw so clearly that God had planned that his son, for whom the world was created, would be made flesh to live in and rule over that world as Christ the King. From this Duns Scotus argued that the very moment that God had made this decision, then that decision included a human mother, how else would he be made flesh? As Scotus put it – “If God wills an end, he must will the means.” This was obviously before creation had taken place in space and time, so his mother would have been conceived perfect in every way, as the mother of the Word to be made flesh, or if you like, Immaculate. She would be totally free from sin. When sin did eventually stain humankind, God made sure that the human mother of his son remained exactly as he had originally conceived her, otherwise his plan would be in jeopardy. It was inconceivable for a woman warped by sin and selfishness to give birth to and bring up a perfect man destined to be the King that he claimed to be before Pilot.

It was for these reasons amongst others, that at the beginning of the fourteenth century, Scotus was the greatest champion of the Immaculate Conception. He was furthermore in the minority, sometimes of one, as he defended this doctrine against all comers most particularly against the Thomists. Now Scotus wasn’t anti- Thomas Aquinas, in fact there’s no evidence that he ever read his works, except through the writings of others. Inevitably the Thomists who held what’s come to be called the ‘Legal Theory of Redemption’, argued that all the descendents of Adam were infected by his sin and that included Mary. Many bitter battles were fought over this doctrine until it was finally defined ‘de fide’ by the Church in 1854.

The moment the famous Jesuit mystic, Teilhard de Chardin had heard about Scotus’ teaching, he immediately replied, “Voila! La theologie de l’avenir.” “There it is, the Theology of the future”. So many of Chardin’s ideas not only resonated with those of Scotus, but added to them and even enhanced them. One thing Chardin did say that was relevant to what Scotus stood for was this: – “Love differentiates.” In other words, love makes things different. The prayer inspired by St Francis ends with these words, “It is in giving that we receive.” In other words when we try to love God, in the very act of loving we receive his love in return and this loves enables us to grow into our true selves, and in becoming our true selves we all become different. That’s why Scotus taught that love is the principle of individuation. There’s an old saying –‘people are the same the world over’ –and it’s true, self-centred people are the same the world over. They are like a handful of different seeds. Even an expert horticulturist would find it difficult to distinguish one from another, because they all tend to look the same, they all seem to be turned in on themselves. But, put them in good soil, water them and make sure that they get plenty of sunlight and see what happens. Then, when they bloom they will all become totally different, each manifesting God’s beauty in many totally different ways.

If human  care can do this for common seed, what can God’s love do when it is allowed to enter into human beings? It will enable them to grow into their true selves. Then, as they become their true selves, they will gradually become more and more different from the crowd from whom they were hardly distinguishable before. Francis of Assisi was a case in point, he was just one of the boys before his conversion, but the more he allowed the love of God to change him, then the more he became what love made of him – his true self, and that was miles away from the drinking pals he’d left behind. That’s why all the saints were totally different. Compare Francis of Assisi with Thomas Aquinas or St Teresa of Avila with St Joan of Arc or St Ignatius of Loyola with St Benedict – love differentiates. Even the early companions of Francis, Leo, Angelo, Rufino, Masseo and Giles etc were, thanks to the love of God, all completely different. I have no doubt that most of them would have been canonized shortly after their deaths, but unfortunately it would have been seen as supporting one faction of the order at the expense of another. What was more important at the time was supporting the unity of the whole order, than stating publicly what those who knew them knew only too well.

Perhaps Chardin’s famous little phrase helps to give a further glimpse into the very nature of the Trinity – ‘love differentiates’. As we have seen, the closer love enabled Francis to draw closer and closer to God, the more he became aware that His love is not just twofold. For the love that continually revolves between the Father and the Son is not just a blind impersonal force, but a person too in ‘His’ own right. Furthermore Francis realized that the more that love entered into him, the more he became himself, not just here on earth but hereafter. The invitation to share in the love unlimited that binds the three in one together to eternity, means that his journey never ends. It is not just one continual ecstasy but ‘epecstasy’, as St Gregory of Nyssa described it. What he means by adding the pre-fix ‘ep’ to the word ecstasy is that we are not just taken out of ourselves and into God, but continually taken out of ourselves and into Him forever and ever. The more love that we receive, then the more our hearts are opened to receive more love, and as God’s love is infinite, the journey goes on and on without end.

The reward of the traveller is to go on travelling, the solace of the searcher is to go on searching, for there is no end to this journey this side of eternity. In heaven the ever deeper and fuller loving simply goes on to eternity together with the ever increasing joy and delight that being loved always brings with it. Like a rose bud that is touched by the sun, it cannot help but respond. Now the longer the sun shines on it, the more the bud opens to receive its powerful rays with ever greater intensity, until it is fully open to display the fullness of its beauty and spread its fragrance to the delight of all. The sun however is finite, it has a beginning and an end, and so does the rose that depends upon it, but the love that we depend on for our completion had no beginning and no end. We have a beginning like the rose, but we have been created by God with an infinite capacity for love so we can go on living and loving to all eternity, like the love that that never stops possessing us with ever increasing power and intensity.

When Our Lady appeared to Marie-Bernarde Soubirous in 1858 she told St Bernadette, as she was later to be known, that she was the Immaculate Conception. Mary herself confirmed what had been defined by the Church only four years before. The teaching of Scotus, once only held by a minority, had at last become part of her official teaching.

THE IMMACULATE CONCEPTION: DEFINITION & IN EAST AND WEST