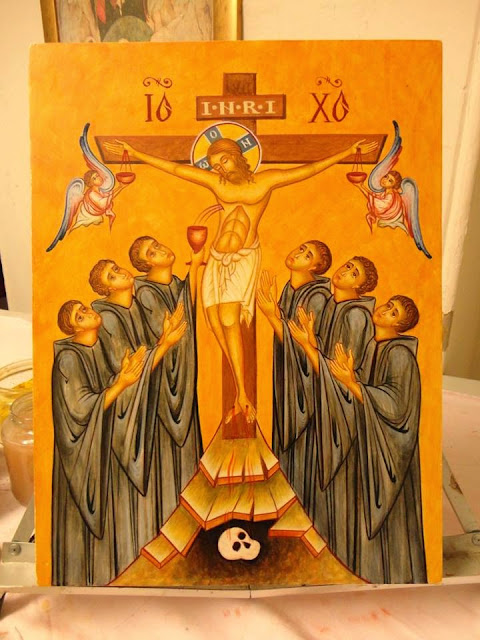 .This icon was written by Dom Alex for his ordination.   Christ on the Cross as source of our intimacy with God the Father, as the sacrifice that unites the community of monks representing the Church on earth with the Liturgy of  Heaven, symbolised by the two angels representing the heavenly host.   Both heaven and earth are receiving sustenance from Christ because he is the Person who unites in himself the Creator with his creation.   His obedience unto death becomes, through his resurrection and ascension, the cosmic sacrifice which is celebrated in the Eucharist and is the means by which the whole of Creation is transformed into a new heaven and a new earth.  The Cross is planted as the tree of life over Adam's grave: and, hence, we have the old Adam and the New. 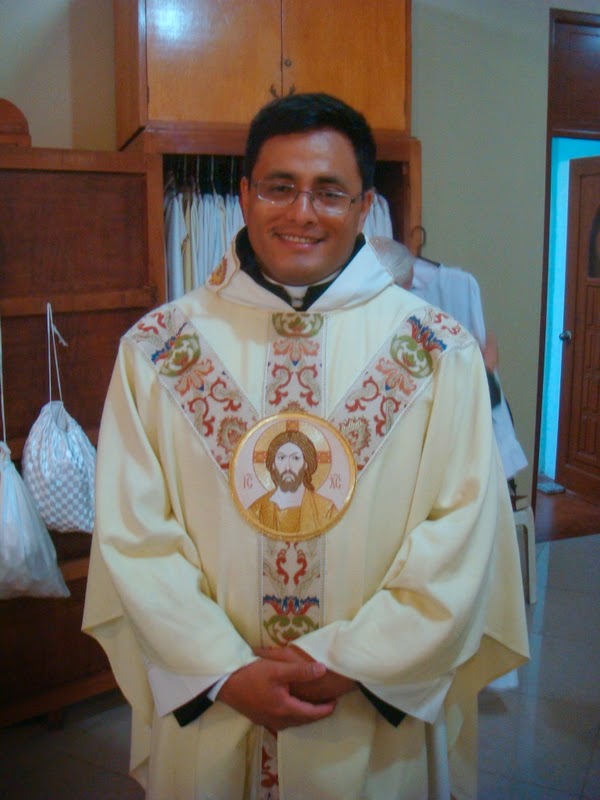 The Medallion of Christ Pantokrator in the centre of his chasuble is from
St Elizabeth's Convent, an Orthodox monastery of nuns in Minsk, Belarus.

The Ordination on Saturday, Feast of St Luke
The Introit, Offertory verse and Communion verse were
sung by the monks in Latin.

The ordination took place in Chiclayo, a city in the north of Peru, in the sanctuary-monastery of Our Lady of Peace which is a diocesan pilgrimage centre and a convent of descalced Carmelite nuns.   The bishop of Chiclayo celebrated. We have known him since he was a priest in Piura; and Alex comes from Chiclayo city and has an immense family as well as numerous friends who would not have been able to come to our monastery, nor would they have all fitted into our small chapel. 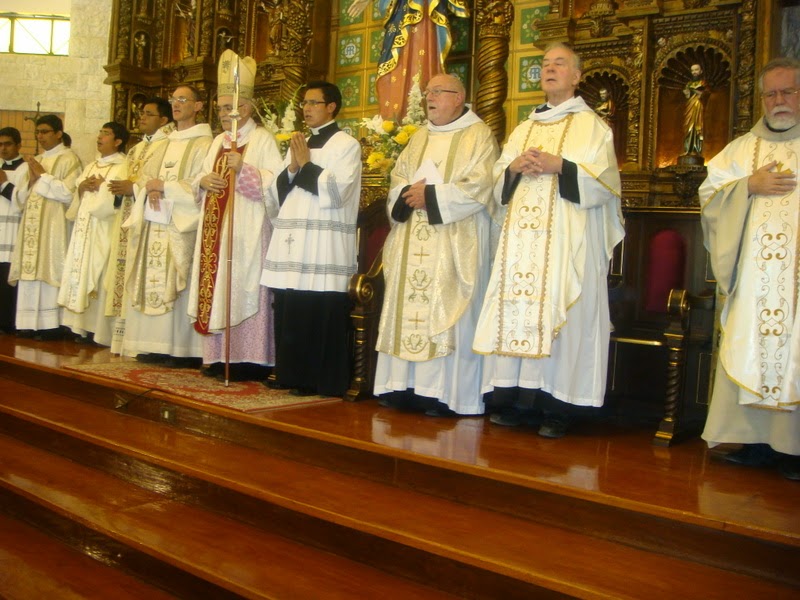 In this photo, there is the Bishop of Chiclayo, with the Abbot President of the English Benedictine Congregation, Abbot Richard Yeo, on his right and Abbot Paul of Belmont (UK) on his left.  Next to Abbot Paul is Father Simon who was superior of our monastery here in Peru, and is now Cathedral Prior of Coventry and a parish priest of Weobley.   Next to him is a friend of ours, Father Eduardo, a hermit monk from Colombia. 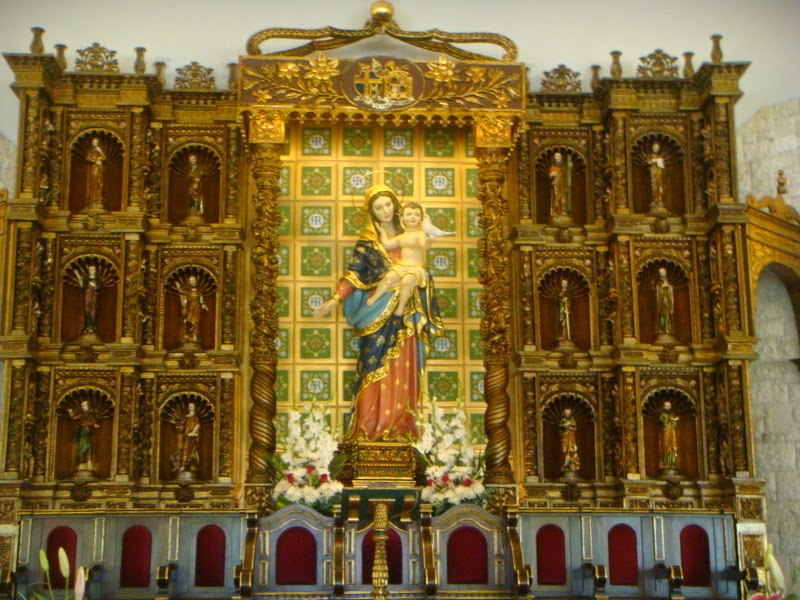 The Shrine of Our Lady of Peace in Chiclayo.
I like the contrast of traditional art in a modern church.   Together, they manage to form a whole. 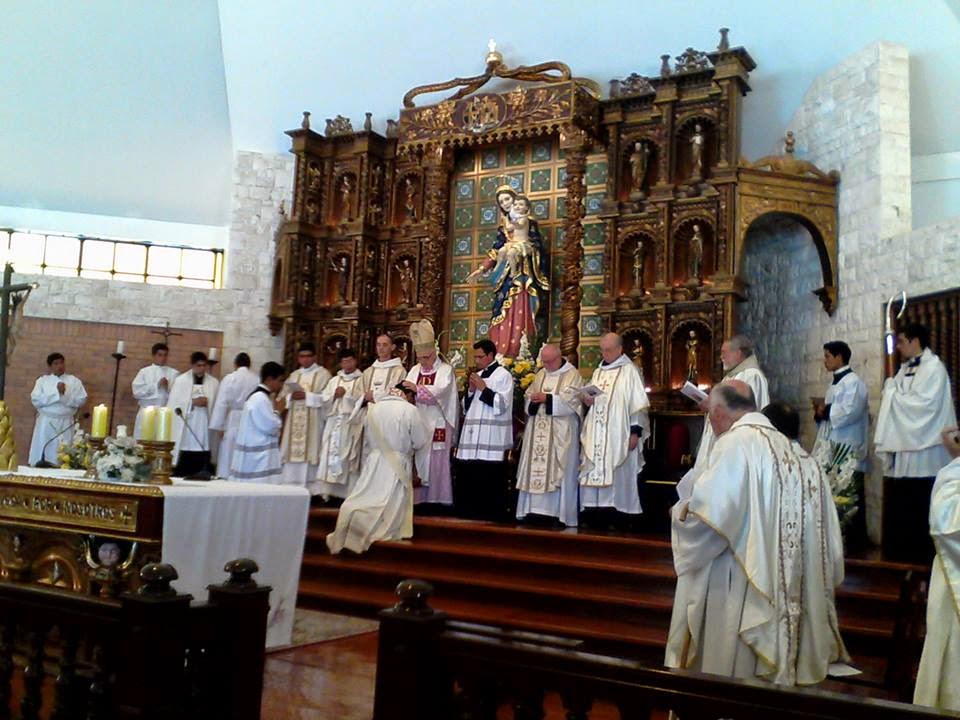 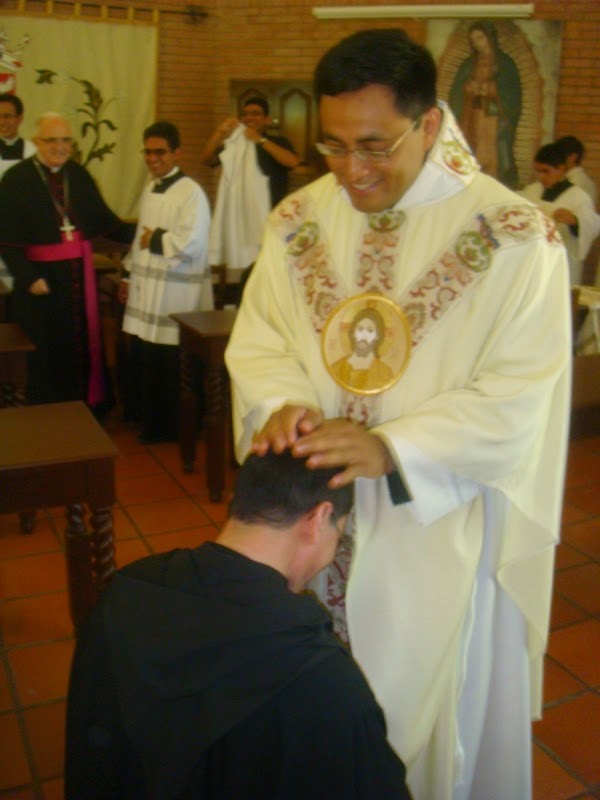 Father Alex blessing Brother Mario
after the ordination.   As is the custom,
the first to receive his blessing was
Bishop Jesus Moline who ordained him. 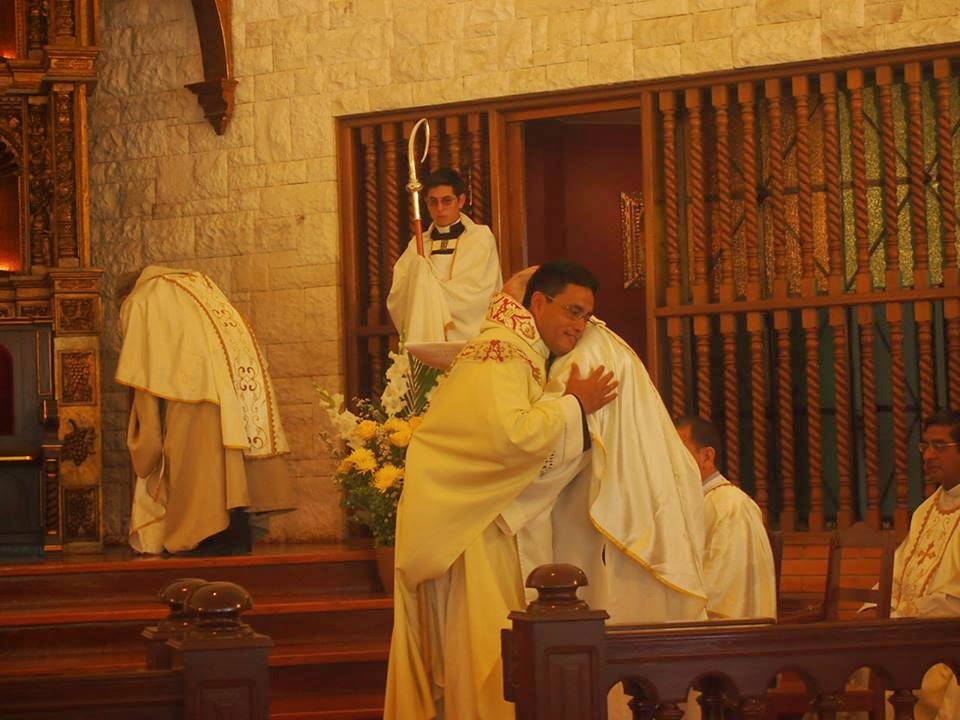 It looks as though Alex is wrestling with a bear
but, in fact, we are embracing after the ordination.
I was congratulating him. 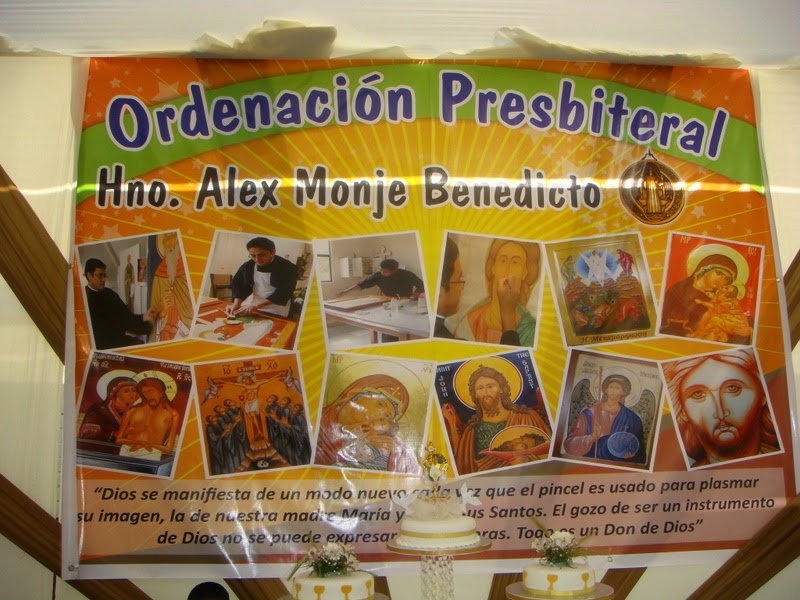 This banner was hanging up where we ate
after the ordination.  It was devised by his family 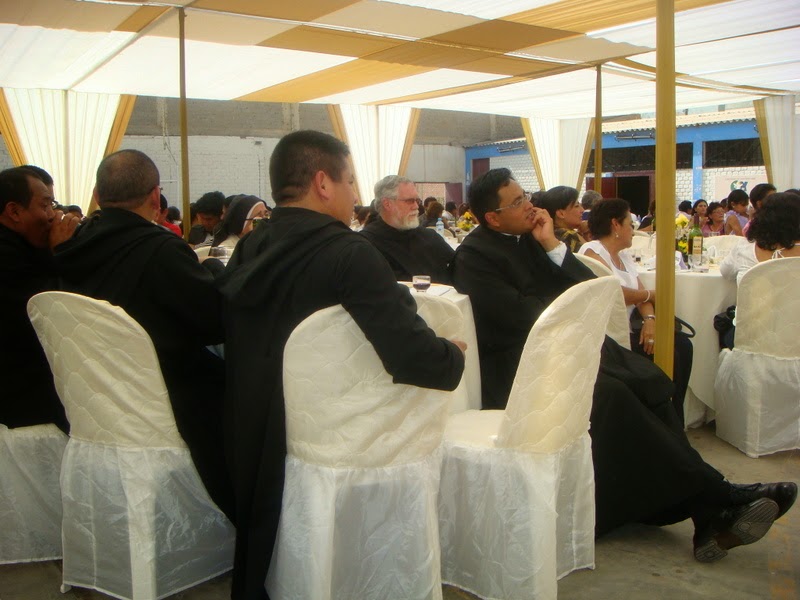 Fr Alex on the right, other monks with him. 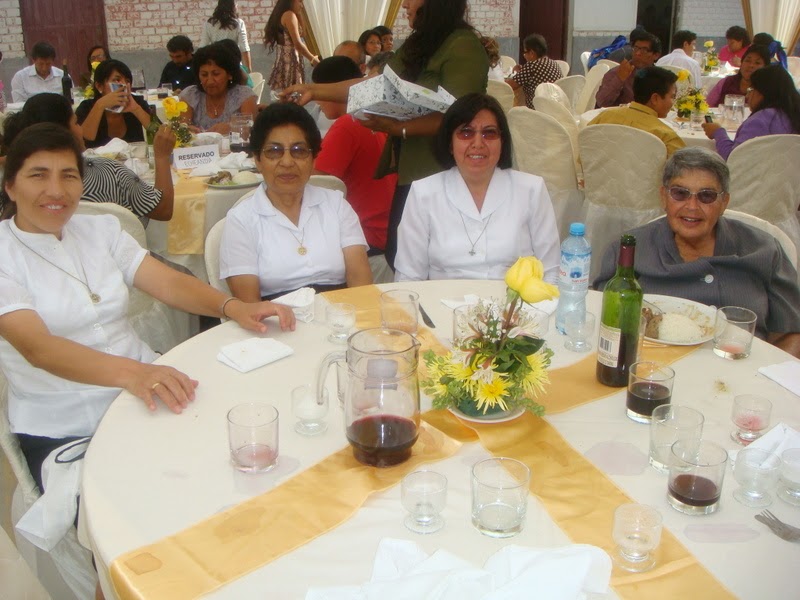 The Benedictine sisters of Morrupon 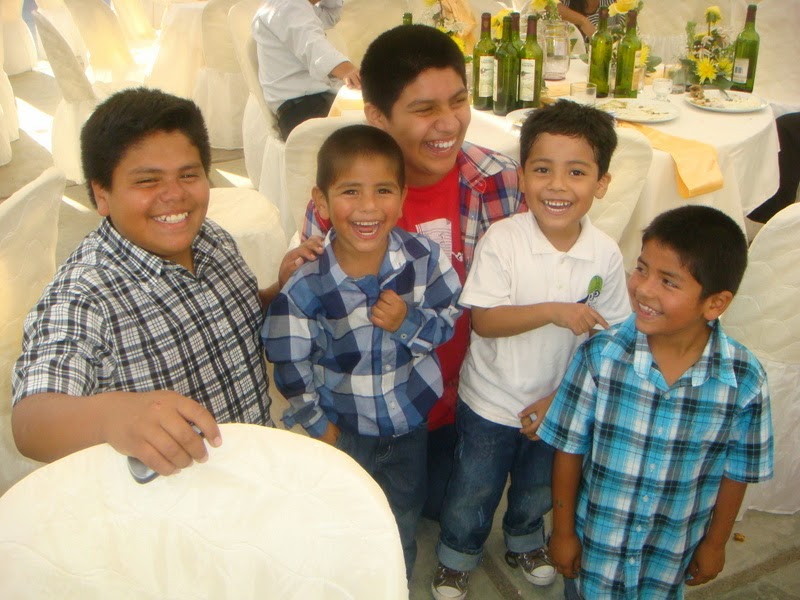 A few of the cousins and nephews 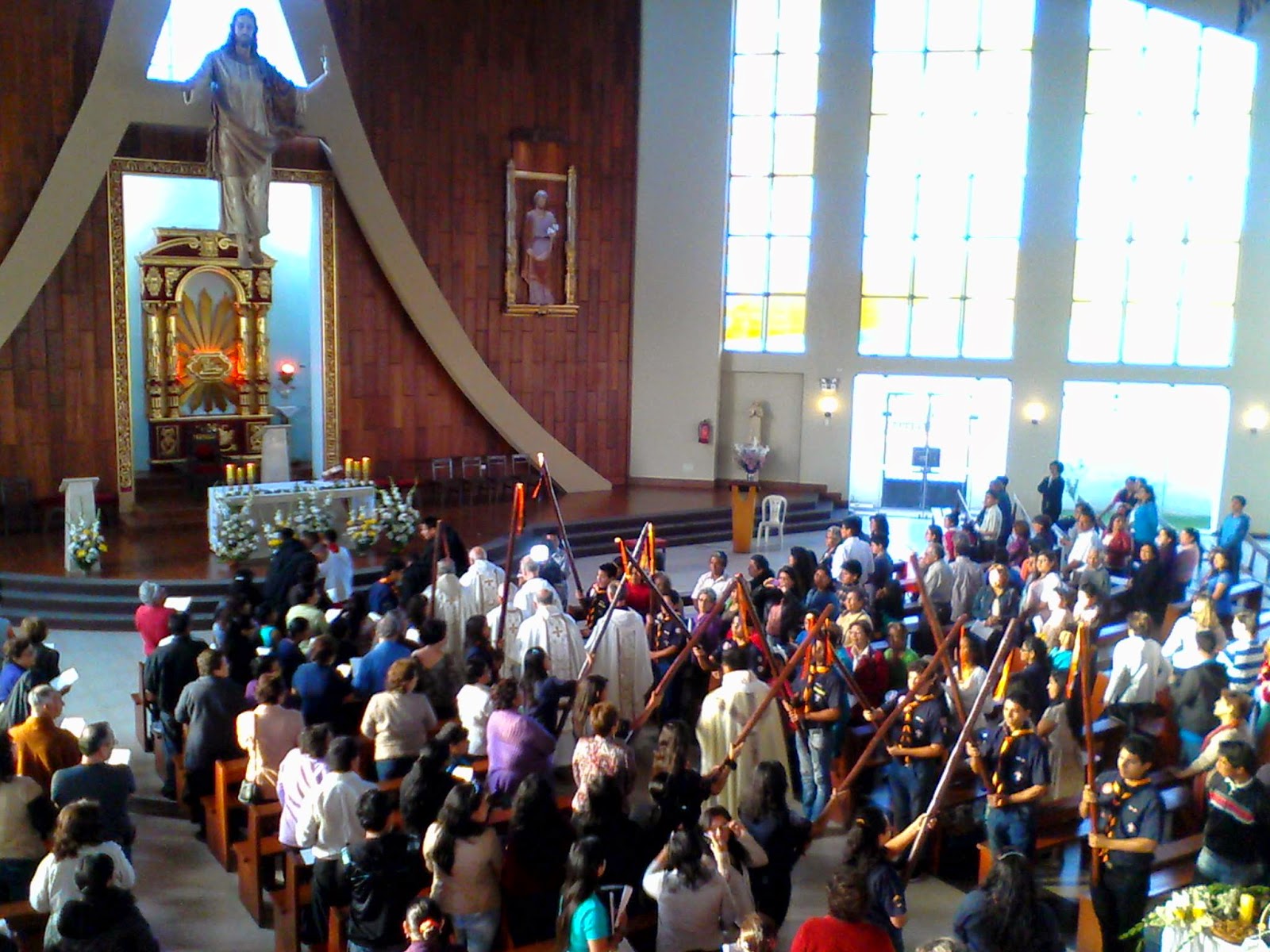 In Alex's first Mass in his Chiclayo parish,
the procession of concelebrating priests
passed under an archway of staves of the
boy and girl scouts. 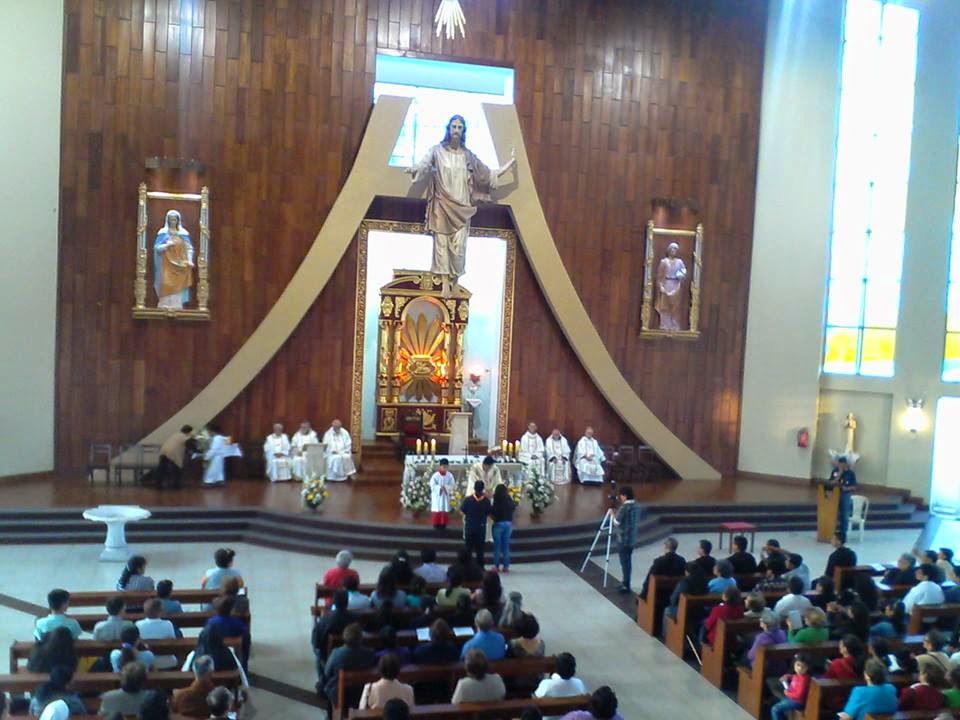 Fr Alex receiving the gifts at the Offertory 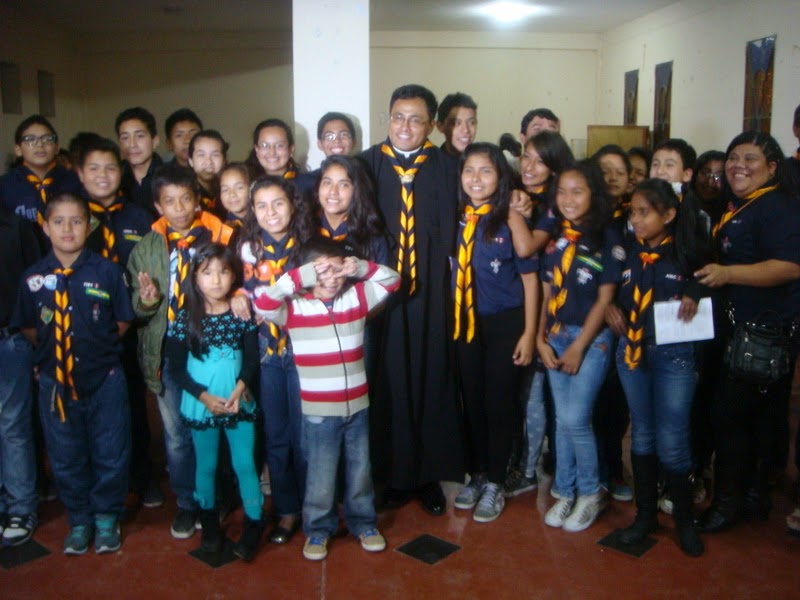 The Scout troop to which he belonged.
Many are his relatives


His 2nd First Mass on the Monday
in San Jose, home of his father's extended
family. 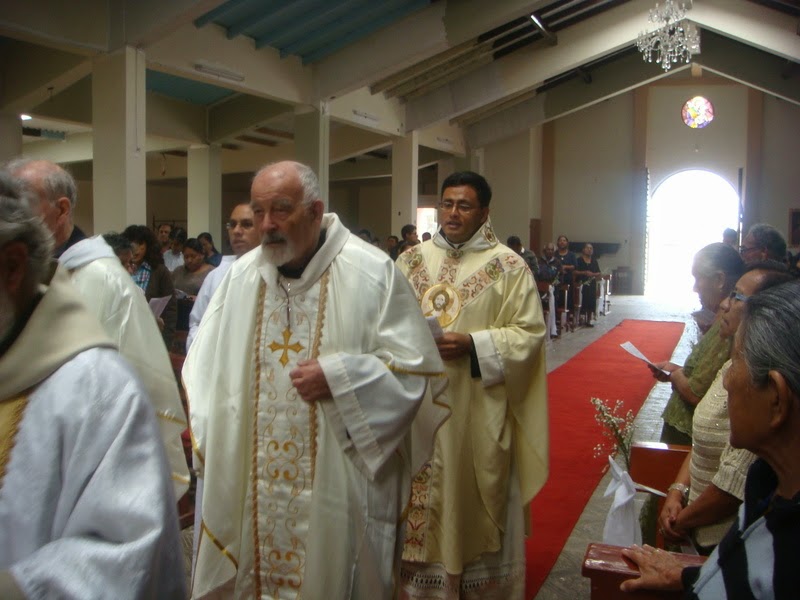 Those visible: Br Percy, Me, Fr Alex
and little bits of Fr Eduardo and Fr Simon
in the fishing village chapel 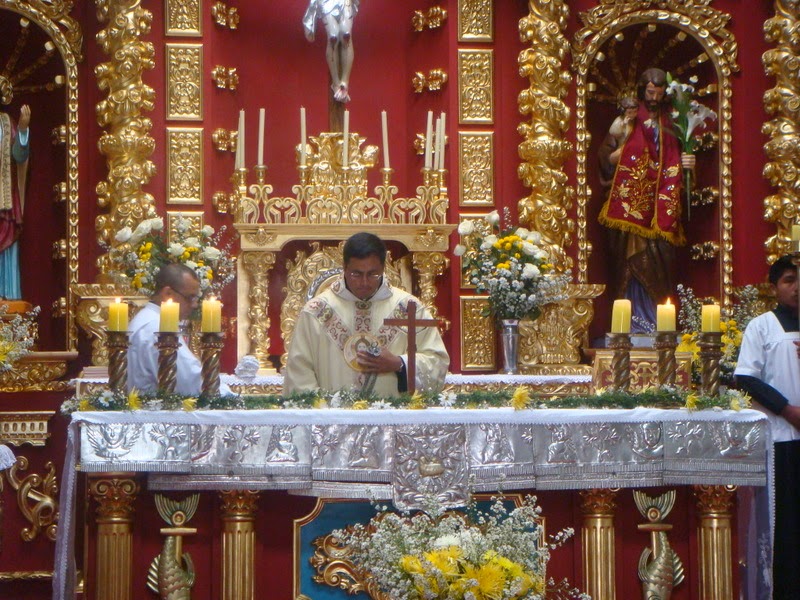 In the fishing village Sant Jose 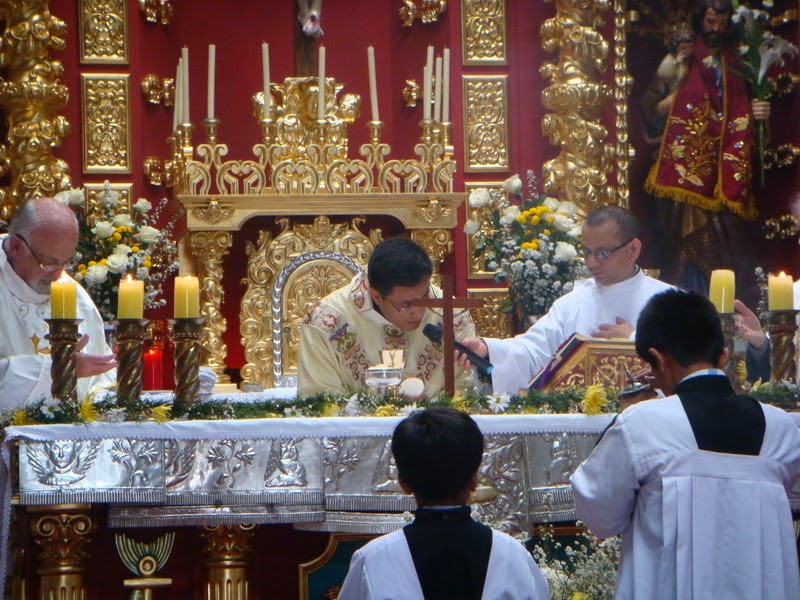 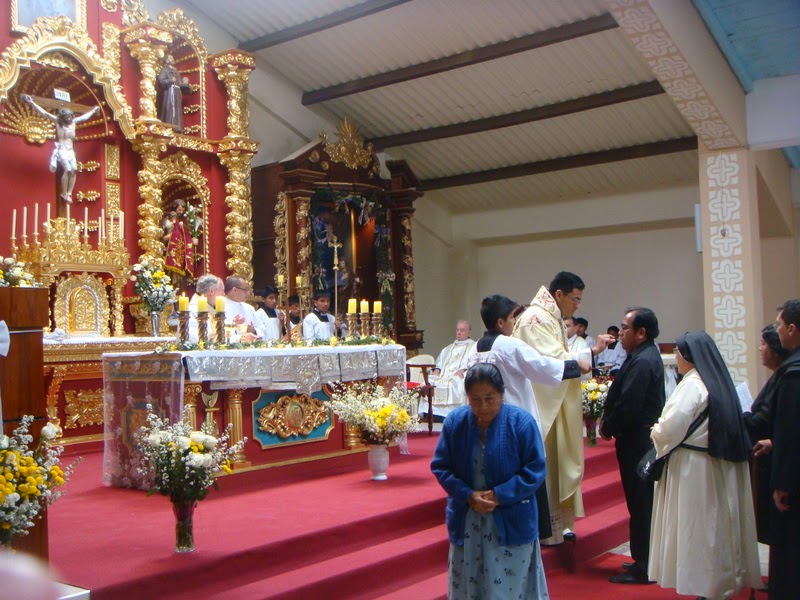 Giving communion to his father 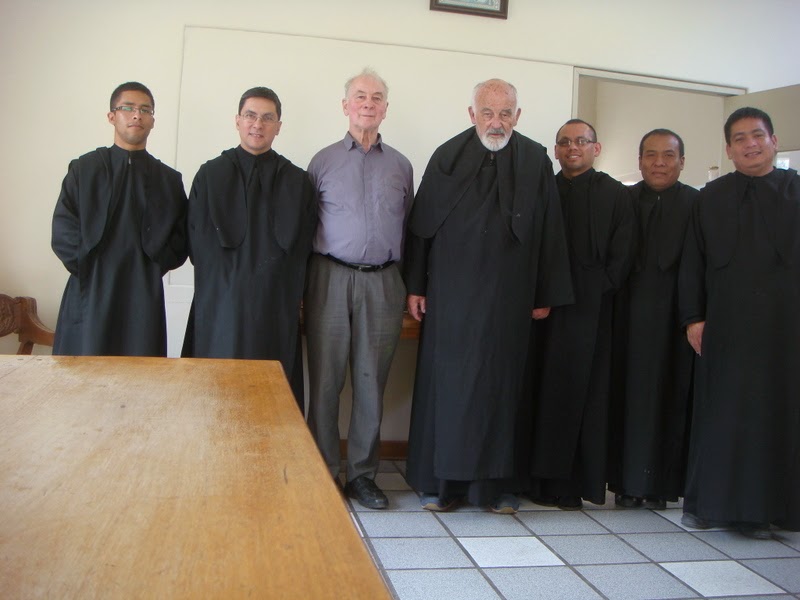 THE FIRST MASS IN THE MONASTERY 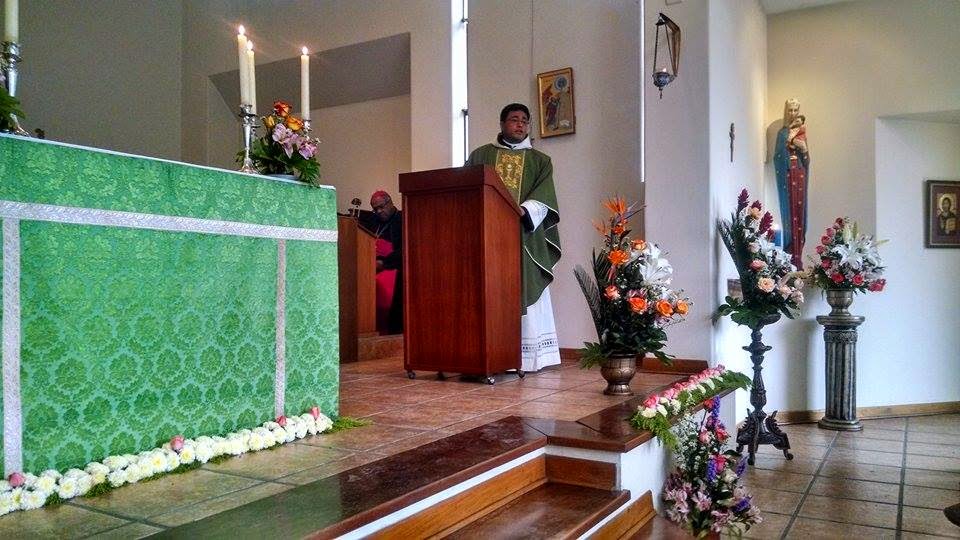 Fr Alex preaching
The icon is of
Moses and the Burning Bush. 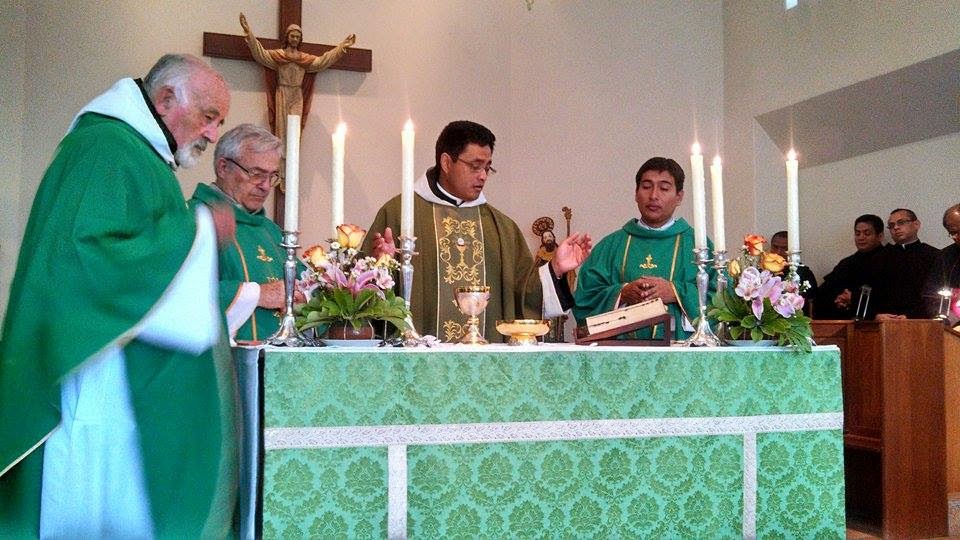 Fr Alex singing the Preface with me, Fr Sixto, a
Salesian, and Fr Wilmer, a charismatic, as
concelebrants, with the monks in the background. 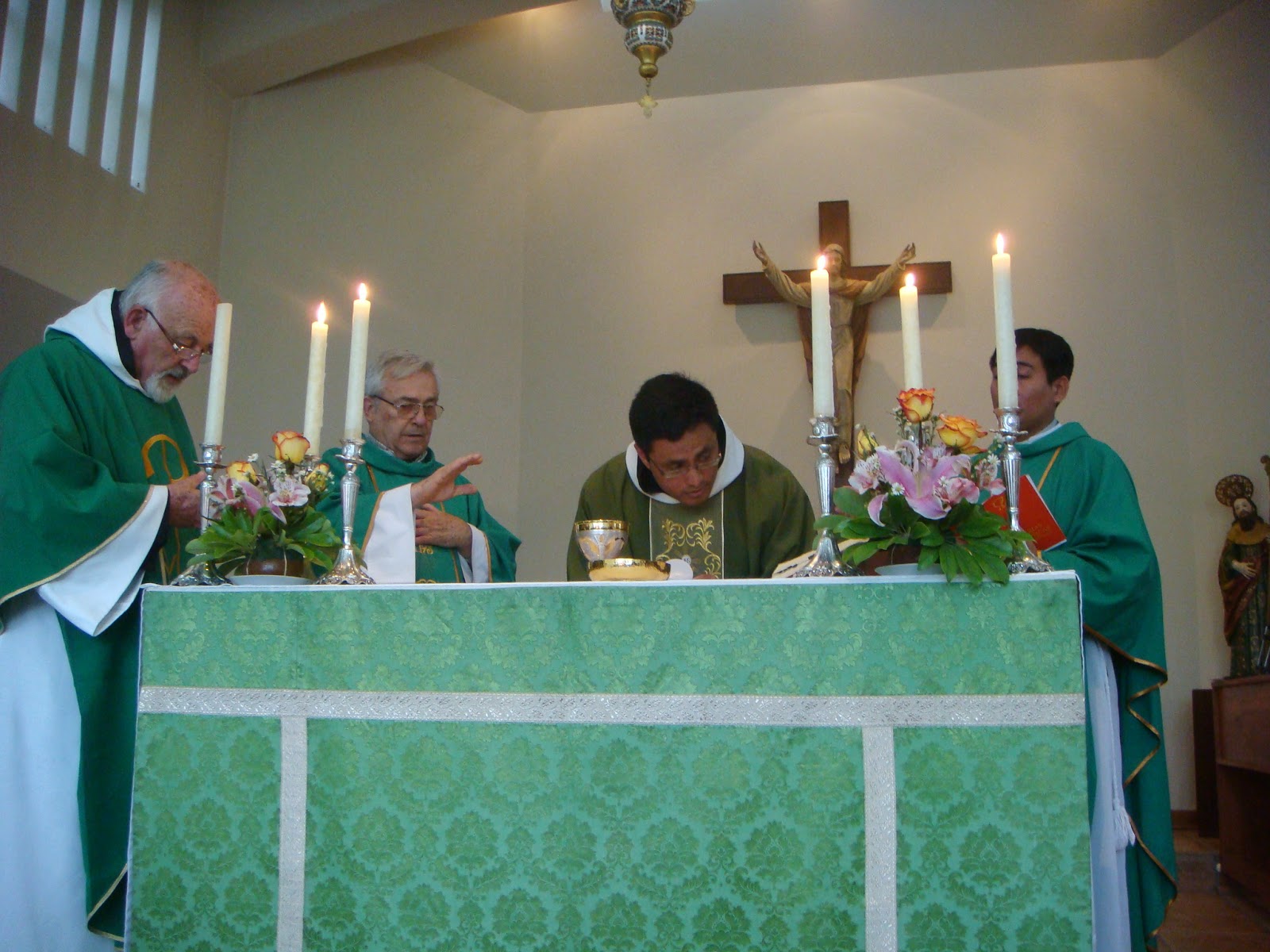 the consecration
any idea that the post-Vatican II version
of the Latin Rite is centred on the people
rather than God is shown, by this photo, to
be utter nonsense. 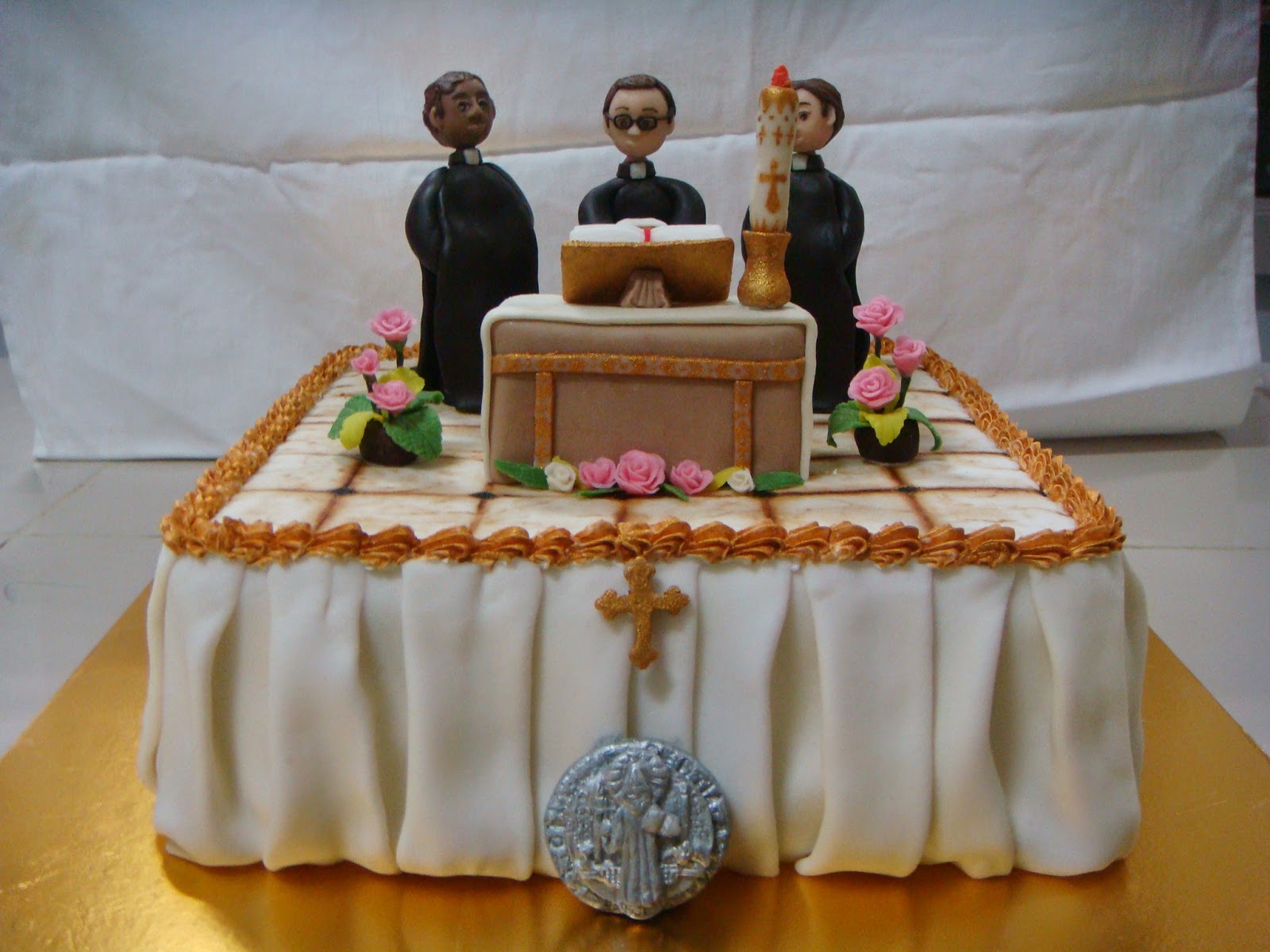 a cake made by one of our guests

Also click on the page in the
Belmont Abbey website.
Posted by Father David Bird O.S.B. at 15:08