OCTOBER 12th: OUR LADY OF APARACIDA IN BRAZIL & THE BLESSING OF AN ICON IN OUR MONASTERY (SYNOD ON THE FAMILY - 6)

July 27th, 2013, Pope Francis visited the national shrine of Brazil, one of the largest in the world.   Full coverage of that event, together with the story behind the shrine and photos, videos etc can be found at:

TODAY IS THE FEASTDAY: PRAY FOR THE CHURCH AND PEOPLE OF BRAZIL

BLESSING OF AN ICON 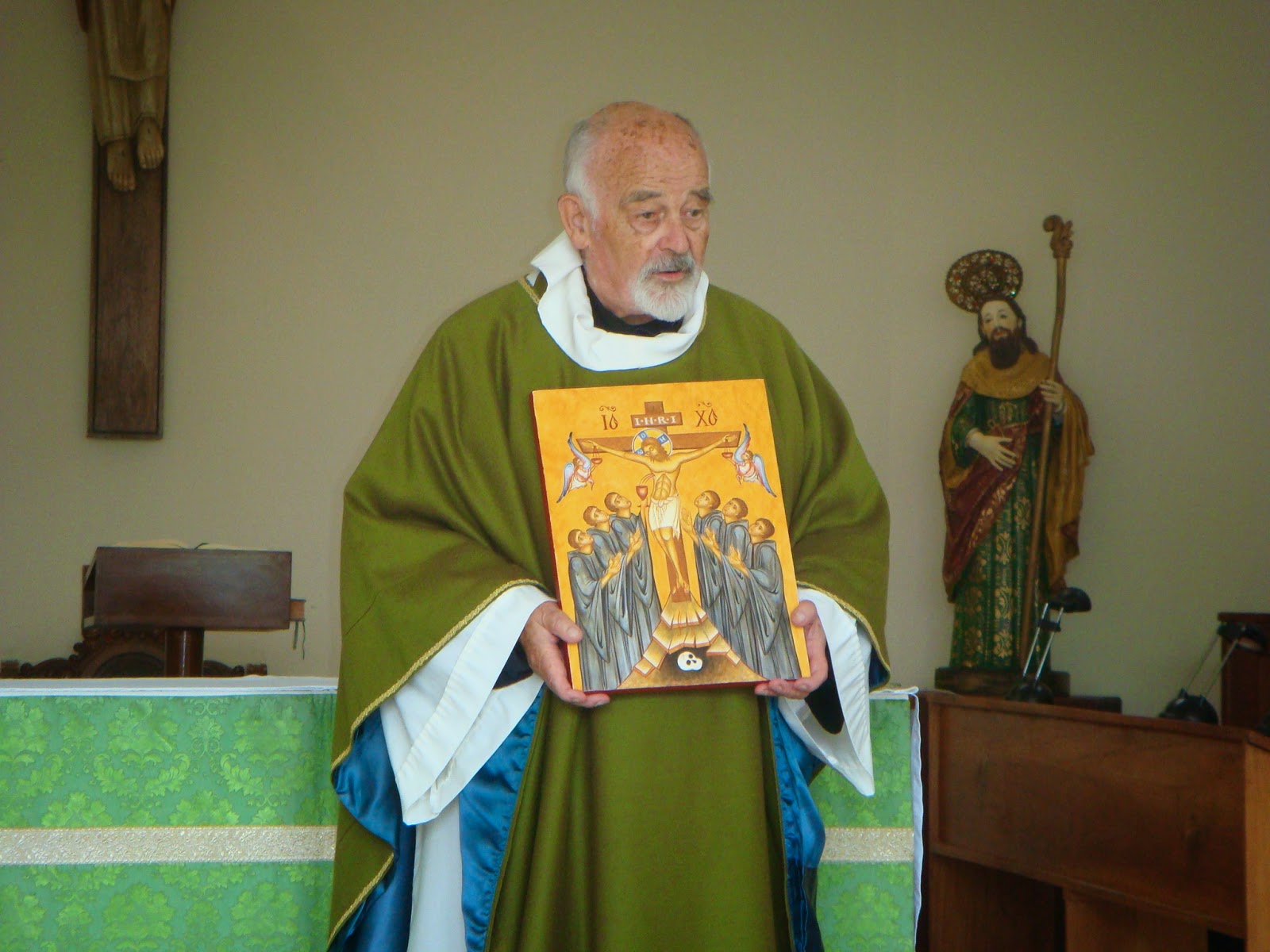 Icons are really a language and tell us much about the mystery or saint that they portray; and this photo shows me telling the people what the icon has to say in the light of the Sunday Gospel,  which is about the Marriage Banquet of the king's Son to which good and bad have been invited because those that had been originally invited did not want to attend.

The icon was "written" by our brother, Dom Alex Echeandia, in preparation for his priestly ordination which will take place on Thursday, the feast of St Luke, patron saint of iconographers.   At the centre, Christ is manifested, glorified on his cross, as in the theology of St John (17,1ff).  At either side, at the level of his hands, are two angels who are collecting the blood that is flowing from his wounds; and this signifies the heavenly liturgy as depicted in the Apocalypse and in the Letter to the Hebrews.   At the foot of the cross, there is a community of monks, and one is collecting blood that flows from Christ's side.   Not depicted but included are the people that are looking at the icon with faith.   The monks and the faithful onlookers signify those who celebrate the earthly liturgy, the holy Sacrifice of the Mass.   Thus, Christ crucified unites the liturgies of heaven and earth so that we on earth can sing, "Holy, holy, holy," together with the angels and saints, and, as the Roman Canon depicts, the consecration happens when an angel takes up the earthly offerings of bread and wine and places them on the heavenly altar so that they become identified with the heavenly offering, which is Christ resurrected and ascended.  In the Mystery of faith, Christ crucified IS Christ resurrected and ascended: he is the Lamb dead but standing (Rev.5,6).

The angels, monks and faithful onlookers all share in the same Spirit which the early Church associated with the Eucharistic cup.   This followed the Jewish tradition in which the spirit of a man or animal is contained in his or its blood.   Thus, St Paul writes,

For just as the body is one and has many members, and all the members of the body, though many, are one body, so it is with Christ.   For in one Spirit we were all baptised into one body - Jews or Greeks, slaves or free - and we were all made to drink of one Spirit. (I Cor. 12, 12&13)

In Ephesians, the author tells us, "Do not get drunk with wine, wherein is excess, but be filled with the Spirit (5, 18)." 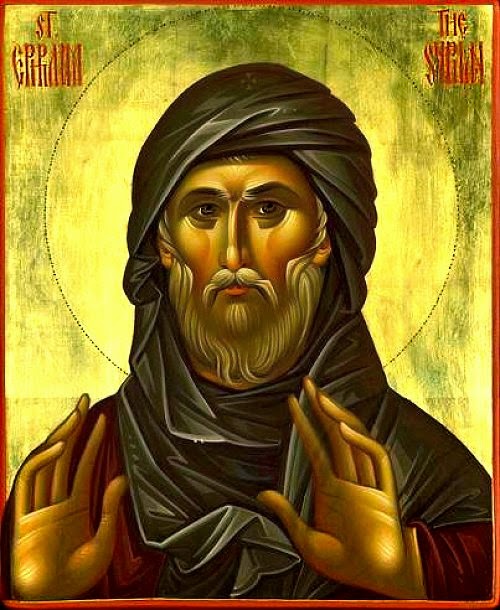 Go with Him, as His inseparable companion, to the wedding feast of Cana, and drink of the wine of His Blessing. Let you have ever before you the Face of the Lord, and look upon His beauty, and let your earnest gaze turn nowhere away from His most sweet countenance. Go before Him into a desert place and see the wonder of His works, where He multiplied in His own Holy Hands the bread that sufficed to feed a great multitude. Go, my brother, go forward, and with all the love of your soul follow Christ wherever He may go … and lovingly behold Him as taking bread into His hands, He blesses it, and breaks it, as the outward form of His own Immaculate Body; and the chalice which He blessed as the outward form of His precious Blood, and gave to His disciples; and be you also a partaker of His sacraments,” - St. Ephrem of Syria (c. 306-73)   Also: "O Lord, we cannot go to the pool of Siloe to which you sent the blind man. But we have the chalice of Your Precious Blood, filled with life and light. The purer we are, the more we receive."   Also: "

“The seraph could not bring himself to touch the glowing coal with his fingers, it was Isaiah’s mouth alone that it touched; neither did the fingers grasp it nor the mouth swallow it; but the Lord has granted us to do both these things.

“The fire came down with anger to destroy sinners, but the fire of grace descends on the bread and settles in it. Instead of the fire that destroyed man, we have consumed the fire in the bread and have been invigorated” 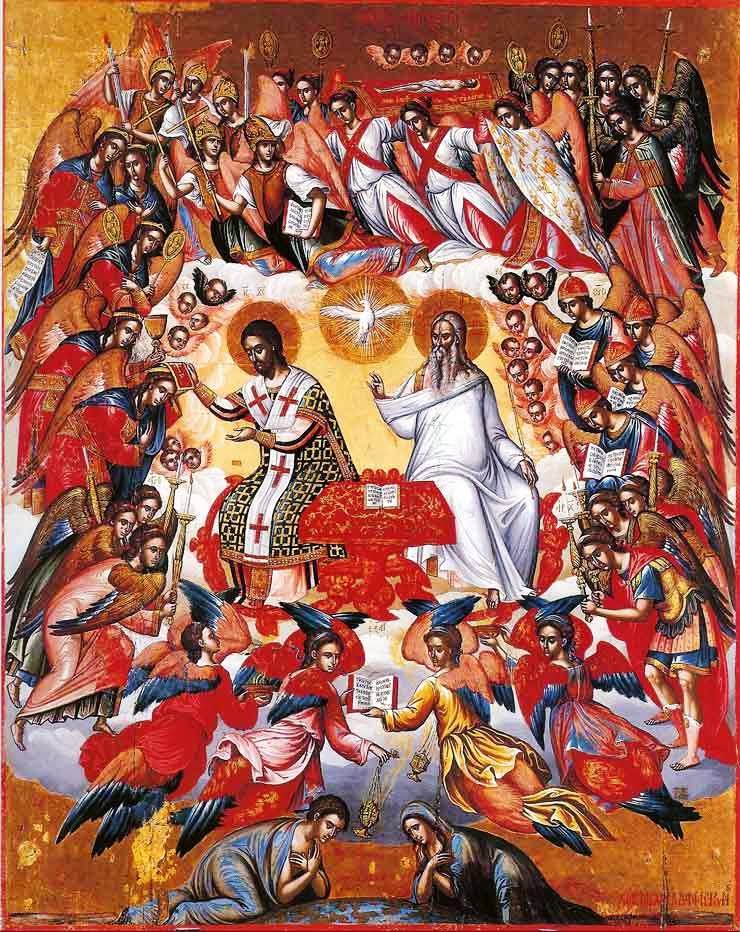 The Eucharist is Pentecost in which by "the Spirit in your bread, fire in your wine" we become the body of Christ, we become the Church.

In the Eucharist we are already sharing in the wedding feast of the Lamb which will be fully revealed at the end of time. The Lord has already sent his messengers into the streets to invite everybody, the good and the bad, to the wedding feast.   God's love for us is not earned, it is not due to our worthiness but only to our need: the more we need him, the more he comes to us and invites us.   We are the blind, the deaf and the cripples who have been invited, not only because of our sins, but also because the Mass is packed full of angels and saints, and we can neither see nor hear them.   Icons and other images come to our aid.   Our attention is crippled because our faith is weak.  The beauty of the ceremony comes to our aid,   Nothing can separate us from the love of God expressed in Christ's total gift of himself to each and every one of us, except ourselves.

For there is a problem: there is a necessary change of heart which we cannot do by ourselves but only in synergy with the Holy Spirit.   Even the great personages of the Old Testament were permitted to divorce because this synergy between the Holy Spirit and ourselves in which the Holy Spirit enables us to share in the life of the Trinity through our humble obedience has been made possible only by the Incarnation.   As Christ said, divorce was permitted because of their hardness of heart.   This capacity depends on conversion which complements baptism:  it is the wedding garment without which our participation in the Wedding Feast is an unwelcome intrusion.

What happens when a person has been baptised as a Catholic lapses in adolescence, like Blessed Charles de Foucauld, marries in church to please his parents, divorces and marries again, and then converts and wishes to live an active Christian life.   To solve it, the Church has treated it as a purely legal problem, and his hardness of heart doesn't come into it.   If he marries in an Anglican church, the marriage is invalid and he is free to marry again, and it does not matter how unfaithful to his first partner he has been.   If he has had the bad luck to have married in a Catholic church, then, when he converts to Christ and wants to receive him in communion, he can't unless he breaks uo his second marriage, which usually no one wants him to do.   As he was not living a Christian life before, whether he married in a Catholic church or an Anglican one was a matter of external circumstance or chance.  Whether he can receive communion or not has nothing to do with his hardness of heart: it is simply a lottery.   There are many problems related to re-married couples where criticism of the Church's normal pastoral practice has little to do with the New Testament, however strictly you interpret Christ's words on marriage.

However, that does not mean to say there is no problem.   Christians still need to wear their wedding garment when they participate in the nuptial feast.   For this reason, the Church is taking a long time and much prayer to solve the problems related to marriage. 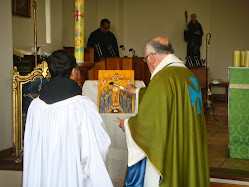 I blessed the icon after the sermon at Sunday Mass.   At the beginning and at an interval during the blessing, the monks sang part of the Reproaches from Good Friday, including the Trisagion in Spanish and Greek:


"Holy is God!   Holy and strong! Holy immortal One, have mercy on us."

The icon was blessed with holy water, chrismated and incensed.   It will be displayed during the ordination and first Mass(-es), and is on the holy picture that will be given to those who take part as a remembrance of the great event in Br Alex's life and in the history of our community.
Posted by Father David Bird O.S.B. at 09:23