THE TRANSFIGURATION OF OUR LORD: A commentary on an icon, by Dom Alex Echeandia OSB

This icon is based on an icon written by Theophanes the Greek in the Cathedral of the Transfiguration in Pereslav at the beginning of the XVth Century,
now in the Tretyakov Gallery in Moscow

This solemnity commemorates liturgically the consecration of the basilicas on Mount Tabor.  In spite of the fact that it is a less ancient feast than that of the Exaltation of the Holy Cross, it takes its date from that feast.   According to an ancient tradition, the Transfiguration of Our Lord took place forty days before the Crucifixion.   Thus the feast of the Transfiguration is forty days before the Exultation which is on September 14th.   The connection between the two feasts is shown by the fact that, from August 6th, the Church sings hymns about the Cross.

In the Orthodox Church, every iconographer, after his hands have been consecrated to practise the wonderful ministry to reproduce Beauty and to be a messenger of the light that is revealed through the icon, begins his service by “writing” an icon of the Transfiguration of the Lord, because every icon is a reflection of the luminous and glorious face of Christ as he appears on Mount Tabor.   The iconographer has to manifest in colours and by symbol the interior image contemplated by him in his own prayer and to communicate to others by means of his art, as they ascend their own interior mountain to pray, something of the glow of the divine rays of light that illuminated the apostles. 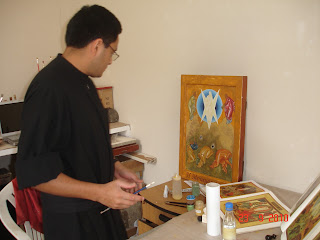 The icon is very true to the Gospel narrative and focuses our attention on the scene as a whole.   Some icons show Jesus ascending the mountain with his disciples on one side, and descending on the other side, telling them not to reveal anything that has happened.   However, more often, all the attention is given to the central episode which reveal  this mystery before our eyes most directly,  with emphasis on the protagonists in this meeting and on the two spaces that appear to become one: heaven and earth.

The central figure is Christ who directs his gaze on the person who is contemplating the icon, with the desire to transmit his glory as Son of God, shining with a light that illuminates every part of the icon: the faces and clothes of all who are there, the rocks in the countryside, all and everything are illuminated by the light that has its source in Christ.   His clothes are white, as at the resurrection,  an explosion of divinity, of light, of the light that is” the light of men.”   The white clothes show who is the source of that light, “God from God, Light from Light,” as we confess in the Creed.   It is the shining whiteness that the author of the Gospel describes with such wonder.   Christ is at the centre of a circle of light which stands for the Glory, the Divinity, the Infinite.   The sun at dawn breaks upon us, as we sing in the Benedictus of Zecheriah. 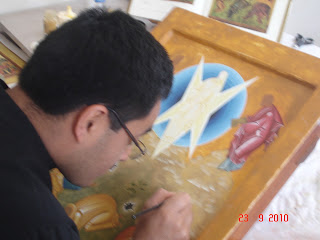 In some icons of the transfiguration, Christ appears in middle of a geometric pattern called a “mandorla” .   It represents the “luminous cloud” that covered him.   In the Bible this cloud stands for the presence of God, and it is a symbol of the Holy Spirit who is within Jesus, who covers him and who  fills the whole of humanity in a veiled way, and who at the resurrection shall appear in all his strength.

In Christ the whole Trinity is both revealed and hidden: 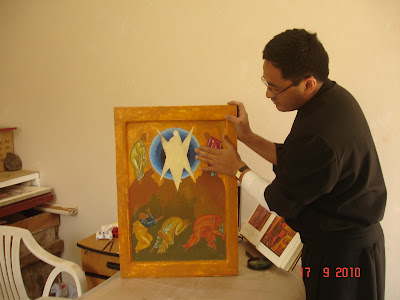 Jesus is accompanied by two figures, an old man who is Elijah and a younger one who is Moses.   Moses is carrying a stone tablet which signifies the Law.   The Law (Moses) and the prophets (Elijah) bear witness to Jesus.   The two are friends of God, men of the mountains and of prayer, the man of Sinai (Moses) and of Carmel and Horeb (Elijah),   The two represent the whole of mankind, the dead (Moses) and the living (Elijah) because, according to biblical tradition, he did not die but was taken up into heaven in a chariot  of  fire (merkabah).   Jesus is Lord of the living and the dead.   They both sought the face of God but did not see Him.   They now contemplate the face of Christ who is the image of the Father.   Before the Christ of the Transfiguration, the Law gives way to the supreme Law.  Here the Lord does not manifest himself as the gentle breeze as on Mount Horeb which surprised Elijah; rather as the full revelation of the Word of the Father.   Moses and Elijah represent the Old Testament which is fulfilled in the New.

In the lower part of the icon are the three chosen disciples of Jesus, Peter, John and James.   They enter into the same Glory of Jesus.   The contrast in their posture is clear.   Jesus and the two figures from the Old Testament seem to show the peace of eternal life.   The disciples, on the other hand, are prostrated on the earth by the sheer glory of the Lord, struck down in a posture of holy awe because no one can see God without being totally dumbstruck by the force of the vision.   They are disconcerted by the light and the voice.  They are witnesses who have experienced the stunning force of a full theophany.

Peter turns to Jesus and have enough presence of mind to suggest to him, "Let us construct three tents..."   a then seems to be overcome by a tremendous joy.   John, the youngest of the three, witness to the Word, appears in complete consternation; it looks as though he wishes to escape.   He covers his eyes with his cloak as though the light is blinding him more effectively than the sun.   James, also on the ground, covers his face with his cloak, unable to look on his Master face to face.   These three are witnesses to the glory of Jesus, as they will be of the agony of Jesus, subject to the fears of death.

This event shows us the divinity of Christ who, passing through his death, resurrection and ascension, manifests himself to us as the shining Glory of the Father, having offered himself  for us voluntarily (Mark 9: 2-0).


When you were transfigured, Oh Christ God, on Mount Tabor, you revealed your glory to your disciples according to their capacity.   Let your eternal light shine on us who are sinners by the intercession of the Mother of God.   Oh Giver of Light, glory be to you.

Transfigured on the mountain, your disciples have seen you and have contemplated your glory, oh Christ, you who are God; then when they saw you crucified, they understood that you did what you did because of your love, that your passion was absolutely voluntary, and they could preach to the world that you are the Splendour of the Father.

(Troparion for the Transfiguration)