FEAST OF ST BARTHOLOMEW, APOSTLE AND PATRON SAINT OF ARMENIA 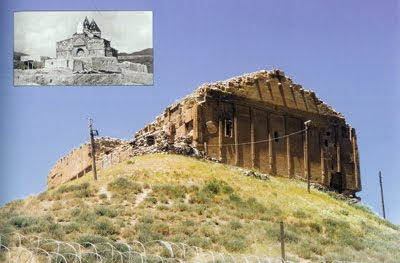 The Monastery of Saint Bartholomew (Armenian: Սուրբ Բարթողոմէօս Վանք) was built in the fourth century at the site of the martyrdom of the Apostle Bartholomew. The burial site of the Apostle Bartholomew was inside of the Cathedral, which was an important pilgrimage place for Armenians before the genocide. It is located in what was then the Vaspurakan Province of Greater Armenia, now near the town of Başkale (Albayrak) in the Van Province of southeastern Turkey.

The monastery was built on the traditional site of the martyrdom of the Apostle Bartholomew[1] who is reputed to have brought Christianity to Armenia in the first century. Along with Saint Thaddeus, Saint Bartholomew is considered the patron saint of the Armenian Church.

At an unknown date after the Armenian Genocide in the early 20th century, the monastery came under the control of the Turkish military and its entire site now lies within an army base. The dome of its church was still intact in the early 1960's, but the whole structure is now heavily ruined.

The monastery St. Bartholomew partly was destroyed by the Turkish army using explosives in the 1960s under the Turkish state-sponsored policy of cultural genocide of Armenian monuments. The main Cathedral currently is in ruins and it is turned into a military installation near the Turkish town Albayrak. It is also strictly prohibited to take photos of the monastery and come close to the standing ruins of the Armenian temple because of the regime of high security around the site.

Turkish armed forces still practices using the ruins or preserved constructions of the Armenian churches and temples as a military installations and stores.
see THE DIVINE LITURGY OF THE ARMENIAN CHURCH
Posted by Father David Bird O.S.B. at 23:46