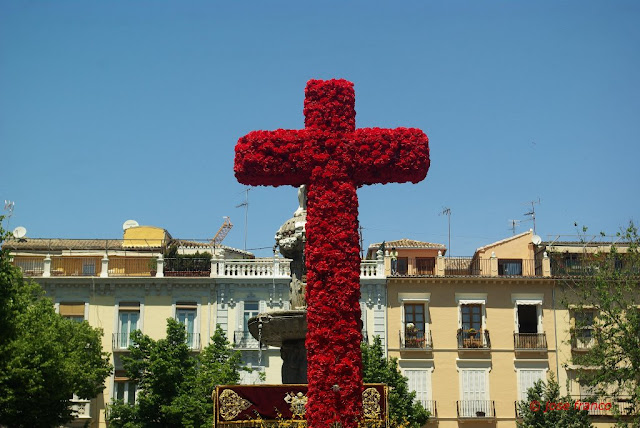 This video makes me feel homesick; and I long to be back in Peru.   Of course, this feast is no longer in the universal calendar of the Church; but popular custom is strong in Peru, and Rome is too far away to effectively change the annual celebrations of feast days where the whole town turns out to celebrate. 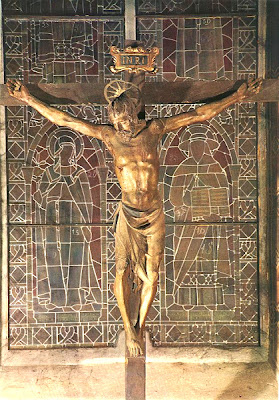 It is often said that western popular piety concentrates on the crucifixion of Christ, and that the Orthodox, in contrast, concentrate of his
Resurrection.   This is an  over-simplification.   As a friar says in the video, crosses without the figure are Paschal crosses.

In many villages there is planted a plain cross painted green that was put there to commemorate a village mission, perhaps eighty or ninety years ago.   The cross is green because Christ's cross is the source of life.   Another way to show the cross to be the source of life is to cover it with flowers, as in the picture at the top of this article.  The main way the resurrection is remembered is in the title of the cross. One crucifix with many devotees in a village I know  is called the "Lord of Life". 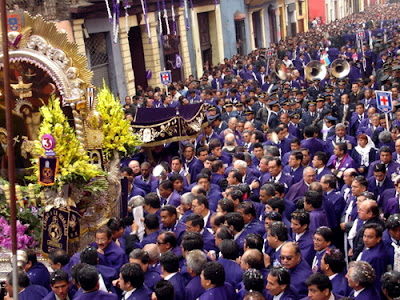 There is a famous painting, the most famous icon in Peru, which is called "Lord of the Miracles"; and there is a statue of Christ before Pilate called the "Captive Lord".  When they wish to picture Christ, they remember him on the cross, because this is the supreme revelation of the meaning of the Incarnation and of the inner Life of the Father which is a Love stronger than death. It reveals him as a God who identifies  himself with human beings at our worst and weakest because he wishes to give us life.


The death of Christ can be imagined because it was an event in this world; and what can be imagined can be painted; but the resurrection of Christ is a reality beyond our concepts which we can touch only with love.   It is quite logical then that the faithful depict the crucifixion and express the Resurrection in a title that invites us to ascend through Christ's death to share in his resurrection.


Here are two videos, one of a celebration in the Andes of Peru and the other from - I think - Venezuela.