THE ASCENSION OF OUR LORD by Blessed John Henry Newman

Upon the glorious aacension of their Lord, the apostles worshipped him, says the text, and returned to Jerusalem with great joy, and were continually in the temple, praising and blessing God.  Now how was it that when nature would have wept, the apostles rejoiced?   When Mary came to the sepulchre and found not our Lord's body she stood without at the sepulchre weeping. and the angels said to her, as Christ did afterwards, Woman, why are you weeping?   Yet, on our Saviour's departure forty days afterward, when the angels would reprove the apostles, they did but say, Why do you stand gazing up to heaven? There was no sorrow in the apostles in spite of their loss, in spite of the prospect before them but great joy and continual praise and blessing.   May we venture to surmise that this rejoicing was the high temper of the brave and noble-minded who have faced danger mentally and are prepared for it?   Moses brought out of Egypt a timid nation, and in the space of forty years trained it to be full of valour for the task of conquering the promised land; Christ in forty days trains the disciples to be  bold and patient instead of cowards.  They mourned and wept at the beginning of the season, but in the end they are full of courage for the good fight: their spirits mount high with their Lord, and when he is received out of their sight, and their own trial begins, they return to Jerusalem with great joy, and are continually in the temple, praising and blessing God.

For Christ had surely taught them what it was to have their treasure in heaven, and they rejoiced, not because their Lord was gone, but that their hearts had gone with him.   Their hearts were no longer on earth, they were risen aloft.   When he died on the cross, they knew not whither he was gone.   Before he was siezed, they said to him, Lord, where are you going?  Lord, we don't know where you are going.   They could but follow him to the grave and mourn, for they knew no better; but now they saw him ascend on high, and in spirit they ascended with him.   Mary wept at the grave because she thought enemies had taken him away, and she knew not where they had laid him.   Where your treasure is, there will your heart be also.   Mary had no heart left to her because her treasure was lost; but the apostles were continually in the temple, praising and blessing God, for their heart was in heaven, or, in St Paul's words, they were dead, and their life was hid with Christ in God. 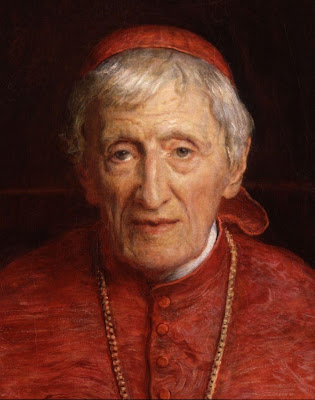 Strengthened, then with this knowledge, they were able to face those trials that Christ had first undergone himself, and had foretold as their portion.   Whither I go, he said to Saint Peter, you cannot floow me now, but you shall follow me afterward.   And he told them, They shall put you out of the synagogues; yes, the time will come that whosoever kills you will think that he does God service.   That time was now coming, and they were able to rejoice in what so troubled them forty days before.  For they understood the promise,  To him that overcomes, I will grant to sit with me on my throne, even as I overcame, and am set down with my Father on his throne.