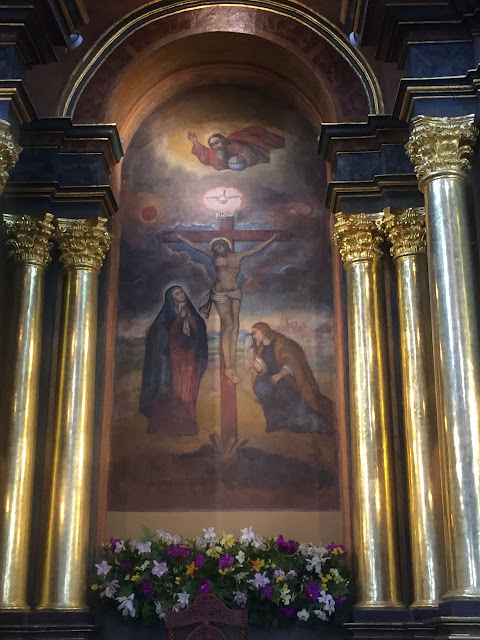 Image of Lord of the Miracles in the church of the "Nazarenas"
typically, it is a depiction of the crucifixion, the visible dimension
of the  Christian Mystery, while the title infers the
resurrection of Christ which is the invisible dimension.

The Church of the Nazarene was packed with contemplative nuns of every shape and size, in a colourful variety of habits, following numerous rules and observances, and they came from all over Peru to see the Pope.  We are the only community of cloistered monks in the whole of Peru, so we were invited too.  The Spanish kings wouldn't allow monasteries of men who worked within the confines of their cloister to settle in Hispanic America, so there is no real monastic tradition here; which means that few men look on a cloistered vocation as an option when they are considering following Our Lord more closely.  We are the fifth of five attempts to establish a Peruvian monastery and all the other attempts were unsuccessful.  It was very clear at this meeting with the Pope that the prejudice still exists that the contemplative vocation should be reserved only to women.  One priest tried to kick us out until we showed him our invitations, and a bishop ordered us to get to the back behind the nuns because this meeting with the Pope was for women only, as though we somehow were invited under false pretensions.

We had started out from our monastery after 3.00am and arrived a couple of hours later at the Salesian College where we swapped our car for a ride on a specially authorised bus.  Only these buses were allowed into the streets surrounding the Church of the Nazarenes where the pope was going to meet us.

The church has an image of Christ Crucified painted on its east wall, originally the wall of an adobe house. The image was painted during the 17th century by an unnamed African taken from what is now Angola to Peru as a slave who  drew the image of a black Christ on the walls of a wretched hut at the Pachacamilla plantation, near Lima. The image stayed on the wall despite several attempts to erase it.

The image survived intact on the wall despite an earthquake in 1746 which leveled all surrounding buildings. As a result of this event, worship of the image rose to new heights, until it became the most widely venerated image in the city of Lima. The principal day of the celebration of the Lord of the Miracles is 28th October, the anniversary of the 1746 earthquake.  Its feast is the main Catholic celebration in Peru and one of the largest processions in the world.

Christ is shown enduring the pain of crucifixion. Above the cross is the Holy Spirit and God the Father. Below and to the right of Jesus is his mother, the Virgin Mary with her heart pierced by a metaphorical sword of sorrow. Kneeling and weeping at the foot of the cross is St. Mary Magdalene.

Every year in October, hundreds of thousands of devotees from all races and economic backgrounds participate in a religious procession honouring the image through the streets of Lima. Boulevards are decorated in purple on October 18, 19, and 28 to celebrate the Lord of Miracles.

The procession in Lima is one of the largest annual processions in all of the Americas, where tens of thousands of the faithful dress in purple tunics, sing hymns and pray as they accompany the image. The litter which bears the painting weighs two tons and is borne on the shoulders of believers who set out on the traditional 24-hour procession from the church of Las Nazarenas, crossing downtown Lima until it reaches the church of La Merced in Barrios Altos. Around this time of year, the streets fill with vendors of a wide variety of typical dishes and sweets, such as the famous Turrón de Doña Pepa.

The image is a copy of the one painted by the Angolan slave on the wall.


Female followers of the Lord of the Miracles often wear purple for the entire month of October, and are easily identifiable by a purple dress, sashed with a white cord.  The church of the Nazarenas is attached to a convent of Discalced Carmelite Nuns whose habit is also purple with a white cord in honour of the Lord of Miracles.

filming the procession by using a drone

Eventually, we found ourselves outside an entrance to the convent with crowds of nuns; and we were all let in one by one as our credentials were examined. 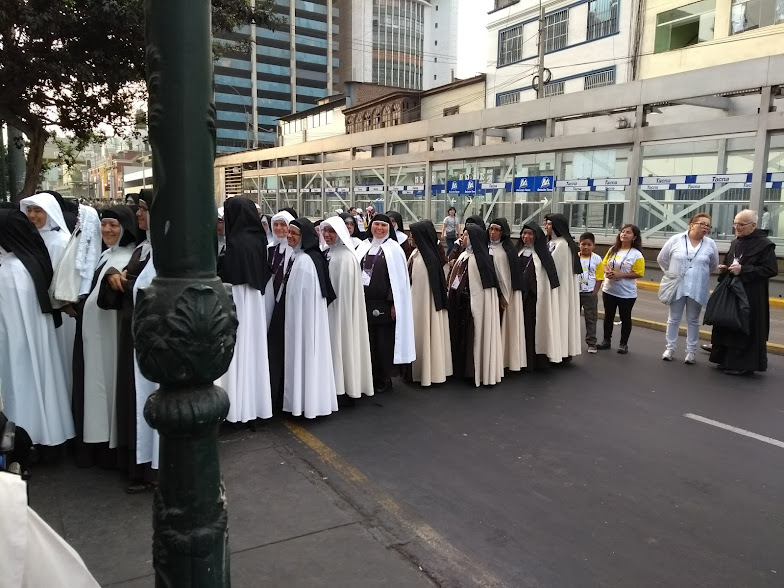 The subprior Brother Mario in the queue with a number of Poor Clares. 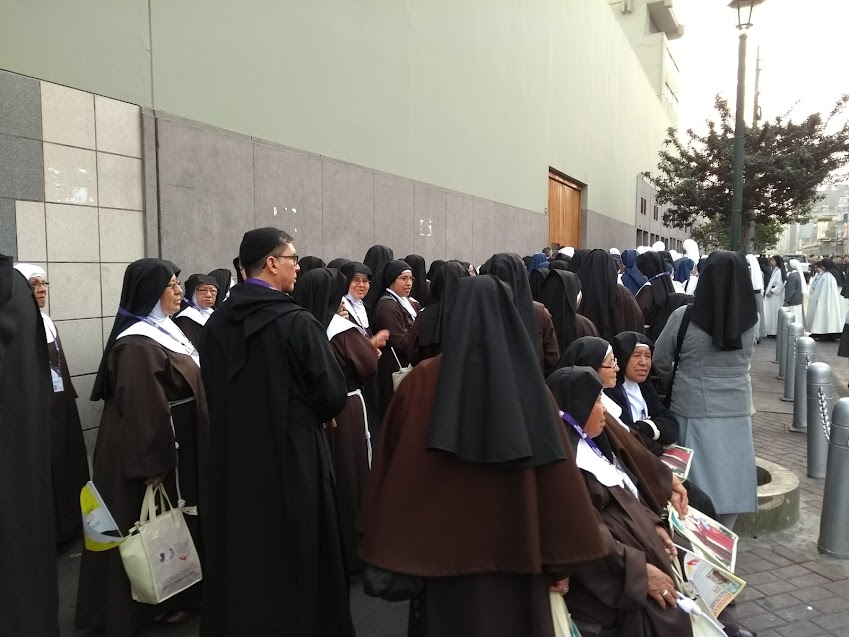 some Augustinian nuns from their most historic convent in Lima.  The one pushing the wheelchair on our left is an old friend of our monastery wo visited us many times as a young lay person. 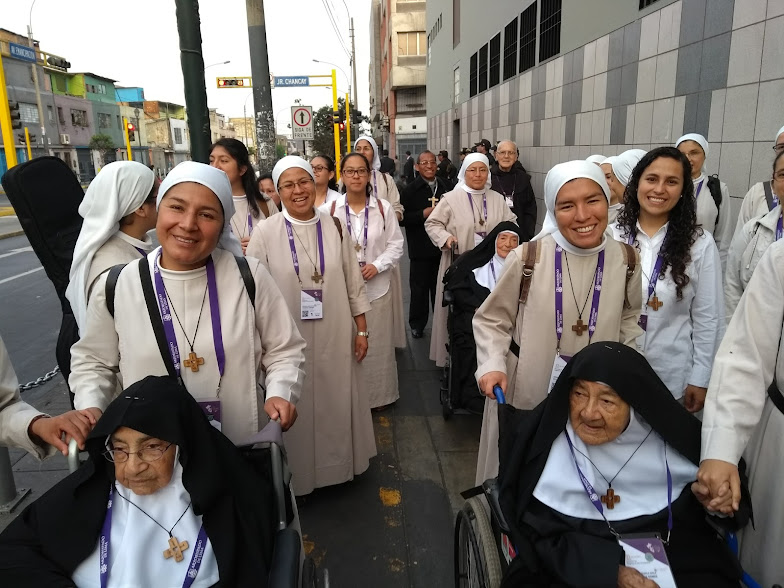 We were placed in the nun's choir,
away from the main body of nuns

Pope Francis' visit to the contemplative sisters
When the Pope arrived, we all sang Terce., and he gave his homily after the short reading:


For you did not receive the spirit of slavery to fall back into fear, but you have received the Spirit of adoption as sons, by whom we cry, “Abba! Father!”

Quite often, the contemplative life is not understood, even by clergy.   Contemplative nuns should not only be tolerated: they are essential to the life of the Church.  As St Therese de Lisieux said, their vocation is to be that of Love in the heart of the Church.  They are missionaries of contemplation and their love fuels all the Church's apostolic activity.Such is their importance that the devil does his best to disrupt their life.  One of his main weapons is gossip.  Gossip can have a terrible effect on community life.  Nuns who indulge in gossip are like terrorists who throw bombs.He then emphasised the importance place that contemplative have in the Church and he blessed us all. 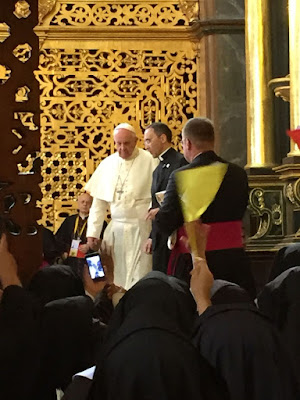 the final mass at Las Palmas