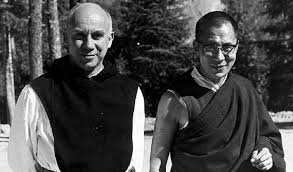 my source: Many thanks to Jim Forest for sending this to me

Thomas Merton died in Thailand on the 10th of December 1968. Here is an extract from Living With Wisdom, my biography of Merton, describing that day: 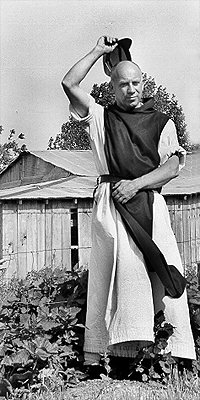 There was also the memory of Merton’s last words. Following the morning conference, Father de Grunne told Merton that a nun in the audience was annoyed that Merton had said nothing about converting people.
“What we are asked to do at present,” Merton responded, “is not so much to speak of Christ as to let him live in us so that people may find him by feeling how he lives in us.”
The icon Merton had with him contains its own last words, silent on one side, and on the back a brief extract from the Philokalia, written in Greek in Merton’s hand:

If we wish to please the true God and to be friends with the most blessed of friendships, let us present our spirit naked to God. Let us not draw into it anything of this present world — no art, no thought, no reasoning, no self-justification — even though we should possess all the wisdom of this world.[vi]

[i]           Among various accounts of Merton’s last days, the most thorough that I know of is by Michael Mott; see The Seven Mountains of Thomas Merton, 561-68.
[ii]          “Marxism and Monastic Perspectives,” Asian Journal, pp 326-43.
[iii]         Story included in an e-mail from Father Patrick Reardon dated September 25, 2007.
[iv]         According to the memory of Brother Patrick Hart, the rain turned to sleet. He recalls the way it was hitting and bouncing off the coffin.
[v]          The list of personal effects did not include Merton’s journals, camera, or the eight relics of saints that he had carried with him throughout his final journey. The PanAm docket for the later return of other personal effects, chiefly books, accounted for four packages weighing 36 kilos.
[vi]         St John of Karpathos, from section 49 of “For the Encouragement of the Monks in India,” included in The Philokalia: The Complete Text, compiled by St Nikodimos of the Holy Mountain and St Makarios of Corinth, translated by G.E.H Palmer, Philip Sherrard and Kallistos Ware, Volume One, p 309-10 (London: Faber & Faber, 1979).

new book:
At Play in the Lions' Den: a biography and memoir of Daniel Berrigan
http://jimandnancyforest.com/2017/06/daniel-berrigan-bio/