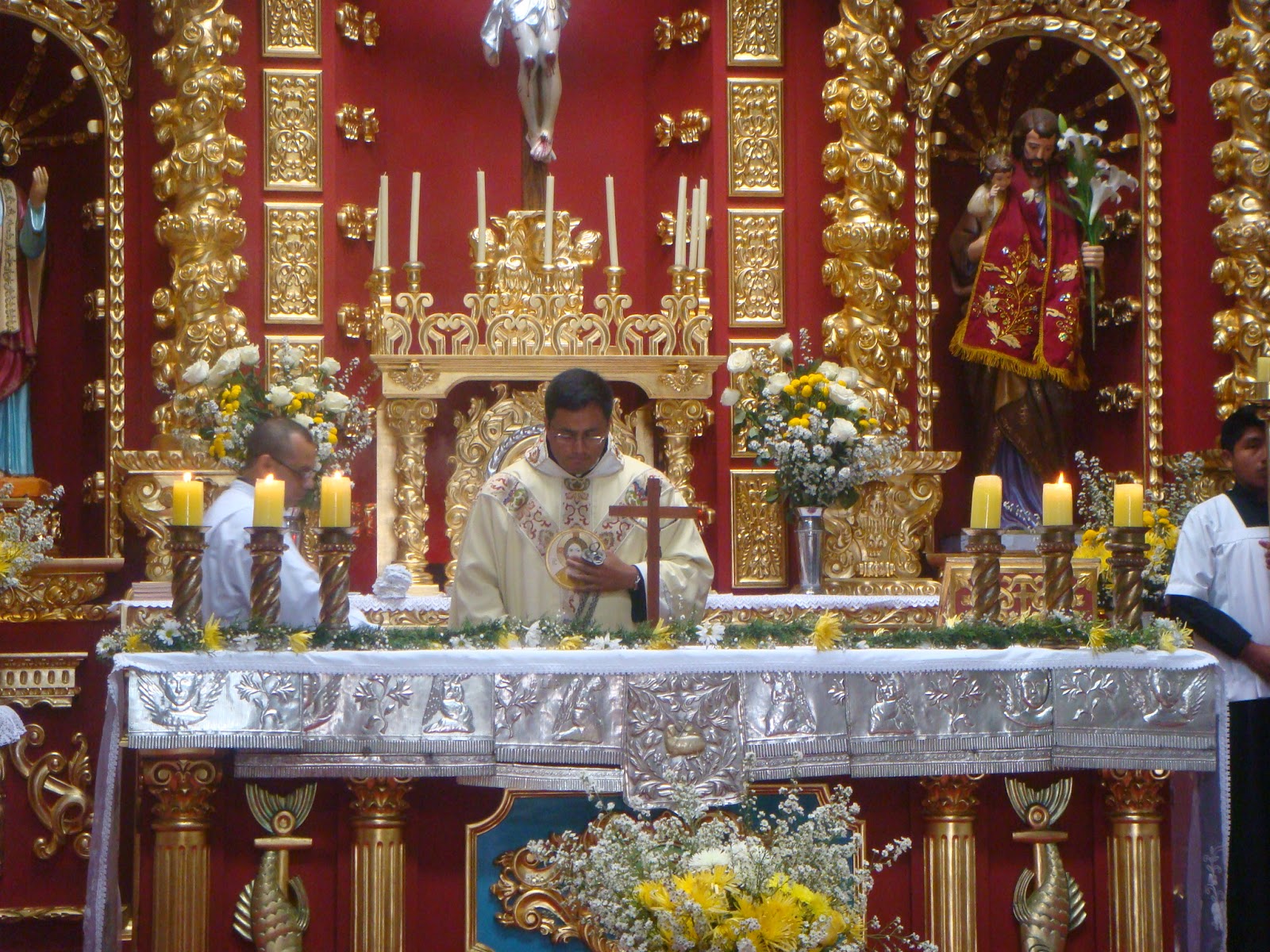 TRADITIONAL LITURGY IN ITS POST-VATICAN II FORM - I: INTRODUCTION by Louis Bouyer Father Louis Bouyer and Dom Bernard Botte OSB composed this prayer, and so the author of this commentary knows what he is talking about.   As with the first post, I shall write in white and Louis Bouyer's contribution will be in yellow.

We learned from the first article that the main concern of liturgists in presenting us with new eucharistic prayers was liturgical ecology.  Firstly, so much tradition had been swept into oblivion or strictly curtailed by the advance of the Roman Rite at the expense of the Gallican, Mozarabic and other rites, that they wanted to make the insights into the Eucharist of previous centuries available in the present in an understandable form.

Actually, this was an application to liturgy of the principles of ressourcement theology to whom Tradition was absolutely central.  They believed that Tradition is formed by the synergy of the Holy Spirit and the humble obedience of the Church, with its roots in the celebration of the liturgy.  They believed that there is a wonderful variety of spiritualities, understandings and expressions of the Catholic Faith down the ages and across the world, any one of which, from any century and any culture, can be brought into use in the present day if we discern that it is helpful.

Within this context, the Vatican version of the Catholic faith, both in theology and liturgy, is one among many and has been severely edited by history; and it needs to be refreshed by contact with the others.   Also, having become, more or less universal, it ought to be able to bring the Catholic faithful into living contact with a much wider version of Catholic Tradition than the traditions of the Roman region, especially an understanding of the role of the Holy Spirit as expressed in the Epiclesis.

The third reason was that the missal of Pius V, while admirable in many ways, was in need of reform.  Perhaps the most glaring mistake was that Pope Pius V used the priest's private mass as the basic model for all other masses.  What the priest said privately when he is without a congregation had to be said by the celebrant at all masses.   This was thoroughly untraditional and portrayed an understanding of the priest and of the Mass very foreign to the teaching of the Vatican II documents present us with a fuller Catholic Tradition.  It gives the impression that the real Mass is what the priest does, and everybody else's contribution is an optional extra.

We are now ready to sit at the feet of the great liturgist, Father Louis Bouyer.

[The 2nd Eucharistic Prayer] uses word for word the greatest part of the eucharist of the Apostolic Tradition.  Into it has been introduced the Sanctus and the intercessions and commemorations, even though the latter retain a very short form.   Actually, from the moment that the type of formulary preserved by St Hippolytus was to be used in a eucharistic meal immediately following the service of readings, it was necessary that the eucharistic prayers which come, as we have seen, from the service of readings and which always accompanied it with both Christians and Jews, be incorporated into it.

The great act of thanksgiving for creation and redemption has thus quite naturally become a preface of particular fulness.


It is truly right and just, our duty and our salvation, always and everywhere to give you thanks, Father most holy, through your beloved Son, Jesus Christ, your Word through whom you made all things, whom you sent as our Saviour and Redeemer, incarnate by the Holy Spirit and born of the Virgin.
Fulfilling your will and gaining for you a holy people, he stretched out his hands as he endured his Passion, so as to break the bonds of death and manifest the resurrection.
And so, with the Angels and all the Saints we declare your glory, as with one voice we acclaim:   Holy, Holy, Holy...

It is enough to go back to St Hippolytus' text to see that in this preface there has been brought together everything that it contained in regard to an evocation of the work of creation and redemption, while simply discarding a few archaic expressions that might for some reason astonish the congregation.

After this, the Sanctus-Benedictus leads up to the consecratory epiclesis through a Vere Sanctus in the Gallican tradition.   Its substance was taken from the Post-Sanctus of the Missale Gothicum for the Easter Vigil.   This text was chosen for the simplicity of its formula which harmonizes spontaneously with those of Hippolytus.   The institution narrative retains the introduction of the Apostolic Tradition, but for this prayer and for the following ones the Verba Christi are in the form of the Roman Canon with the addition of the mention of the body "which will be given for you" and the omission of mysterium fidei.   This latter expression is of uncertain origin and meaning and it complicates the task of the translators to the point of requiring hardly tolerable repetitions in most modern languages.


You are indeed holy, [vere sanctus], O Lord, the fount of all holiness.Make holy, therefore, these gifts, we pray, by sending down your Spirit upon them like the dewfall, so that they may become for us the Body and Blood of our Lord Jesus Christ.At the time he was betrayed and entered willingly into his Passion, he took bread and, giving thanks, broke it, and gave it to his disciples sayingTAKE THIS, ALL OF YOU, AND EAT OF IT, FOR THIS IS MY BODY, WHICH WILL BE GIVEN UP FOR YOU.In a similar way, when supper was ended, he took the chalice and, once more giving thanks, he gave it to his disciples, sayingTAKE THIS, ALL OF YOU, AND DRINK FROM IT, FOR THIS IS THE CHALICE OF MY BLOOD, THE BLOOD OF THE NEW AND ETERNAL COVENANT, WHICH WILL BE POURED OUT FOR YOU AND FOR MANY FOR THE FORGIVENESS OF SINS. DO THIS IN MEMORY OF ME

At this point an acclamation on the part of the people has been introduced, as in many Eastern liturgies, in the same terms, inspired by the Pauline narrative, as those found in the Anaphora of St James.   As we saw, from there it passed to the Ambrosian canon:


We proclaim your death, O Lord, until you come again.

Then follows the anamnesis which leads directly into the second epiclesis.   Again, it preserves the terms which seem best attested in the text of St Hippolytus and which are at the same time powerfully expressive in the most simple language of the work of the Spirit in the Church, the fruit of the eucharistic celebration of the holy sacrifice.


Therefore, as we celebrate the memorial of his Death and Resurrection, we offer you, Lord, the Bread of life and theChalice of salvation, giving thanks that you have held us worthy to be in your presence and minister to you.Humbly we pray that, partaking of the Body and Blood of Christ, we may be gathered into one by the Holy Spirit.

The intercession for the whole Church follows naturally, and is based upon the final allusion to the Church in the text of Hippolytus.


Remember, Lord, your Church, spread throughout the world, and bring her to the fullness of charity, together with N. our Pope and N. our Bishop and all the clergy.

After a short silent prayer for all the living, there is the commemoration of the dead:


Remember also our brothers and sisters who have fallen asleep in the hope of the resurrection, and all who have died in your mercy: welcome them into the light of your face.

After a second pause, the evocation of the saints is directly connected to the intercessions and brings us back to the eschatological perspective of the final doxology.


Have mercy on us all, we pray, that with the Blessed Virgin Mary, Mother of God, with the blessed Apostles and all the saints who have pleased you throughout the centuries, we may have part in eternal life and may glorify you through your Son Jesus Christ.Through him, and with him, and in him, O God almighty Father, in the unity of the Holy Spirit, all glory and honour is yours, for ever and ever. Amen.

The clarity and biblical simplicity of the wording in this prayer make it a genuine eucharistic catechesis, appropriate for every day celebrations as well as for masses directed toward children and neophytes.