NOVEMBER 13th: FEAST OF ST JOHN CHRYSOSTOM: BEGINNING OF A MEETING OF ORTHODOX ARCHBISHOPS IN LIMA. 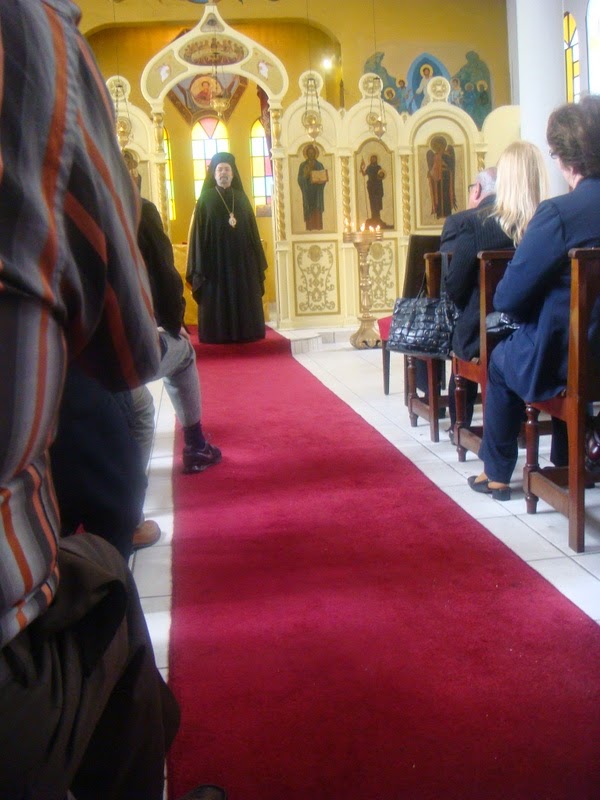 We were invited to a Divine Liturgy in the Orthodox parish of the Holy Trinity in Lima in the presence of three Archbishops, a bishop and a priest from Poland.   The Mass was celebrated by the parish priest, Father Sergio Benavides from Chile. Present were  Metropolitan Tarasios of Buenos Aires and South America, Metropolitan Athanegoras of Mexico, Central America, Colombia, Venezuela, & the Carribean, and Metropolitan Chrysostomos of the Polish Orthodox Archdiocese of Brazil who presided because the Divine Liturgy was served in honour of St John Chrysostom, his patron saint.

I had visited Father Sergius, a young priest from Chile, who has been Orthodox since childhood, a week before, together with Father Alex and Brother Juan Edgar.   He is a convinced ecumenist.   "The Church should breath with both lungs.   We are separated by human mistakes which we should not allow to come between us!"   He invited us to this Divine Liturgy which begins a meeting of Orthodox bishops of various patriarchates who work in Latin America to discuss their common problem.   They were also discussing next year's visit to Lima of Bartholomew I, Patriarch of Constantinople.   As a parting gift, Father Sergius gave us a jar of incense from Mount Athos.

It was the feastday of All Monastic Saints, so we celebrated our own sung Mass with Lauds and incense straight after Matins.   The first lesson told of Elijah in the cave who discerned God's presence, not in great noise or great winds, but in the "Sound of Silence".  When we strive to listen for God's voice which is very close and which usually speaks, not in the high drama of miracles, but in ordinary, everyday events and circumstances, in a voice so quiet it can be ignored, we monks have two things that help us to listen, humble obedience and silence.  After a quick breakfast, all eight of us went to the other side of Lima to attend the Divine Liturgy.   I am sorry there are so few photographs: 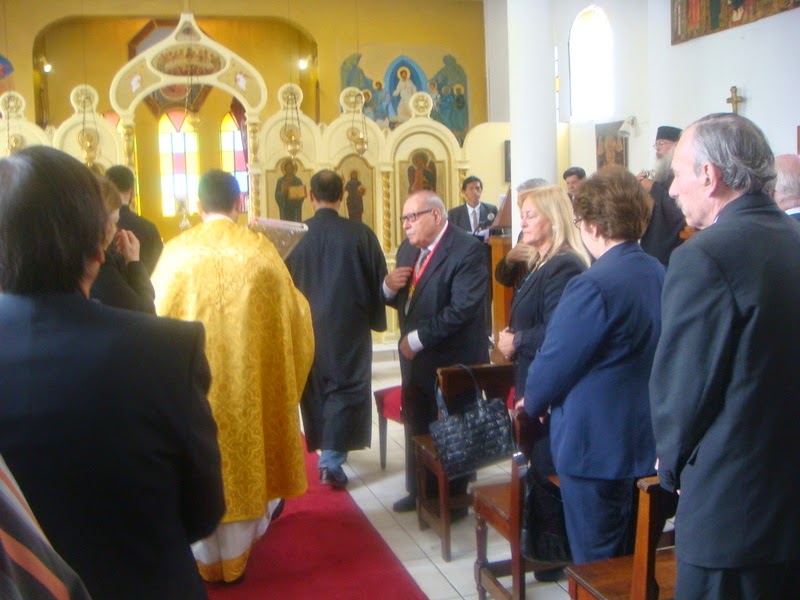 This is the Little Entrance when, at the beginning of the Liturgy of the Word, the priest, Fr Sergio, processed the full length of the church and back to the altar again with the gospel book which represents  Christ, the Teacher, who enters the Assembly to speak through the readings. 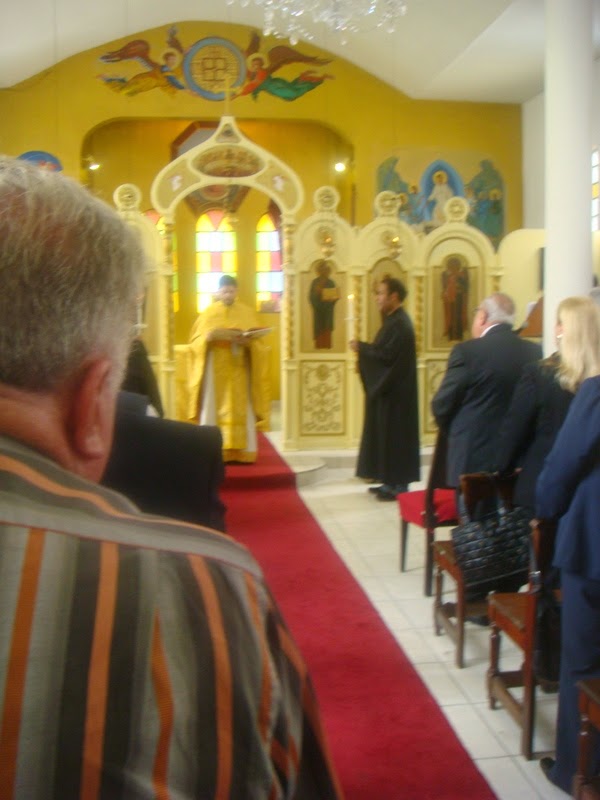 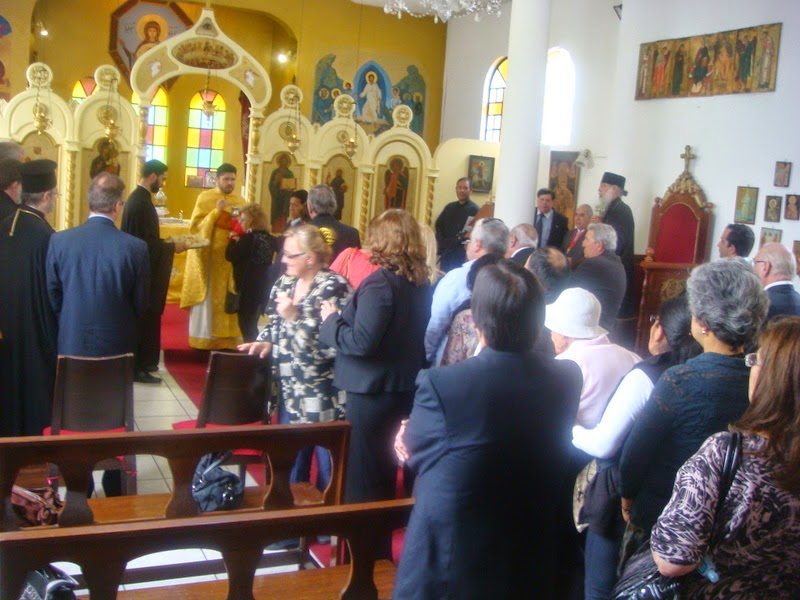 We waited for some time before communion while Father Sergio cut the consecrated "lamb" into small particles that he then put into the consecrated wine.   He then came out of the sanctuary and put a small particle steeped in the blood of Christ into the mouth of each communicant with a spoon. Afterwards, each communicant is given a piece of the unconsecrated part of the bread, a memory of when the Eucharist was given during a wider meal.  As babies are baptised, confirmed and receive communion at eight weeks old, baptised babies and small children also receive communion, as do people whose mental illness stops them from understanding what is going on.   I agree with this: if we believe in the Real Presence, how can we insist on an intellectual grasp of what is happening: it smacks of Protestantism.  Do not the sick need Christ?   On the left of the phot is the Metropolitan of Buenos Aires, while Metropolitan Chrysostomos is at the right of the picture, at the throne.

After Mass, Metropolitan Tarasios greeted the hierarchs by name, as well as the Greek ambassador and a few other dignitaries from the church of Constantinople.   He then greeted us, the Benedictine community, saying how welcome we are.  The photo is above, introducing this post.   He said that the fifth assembly of bishops engaged in South America. 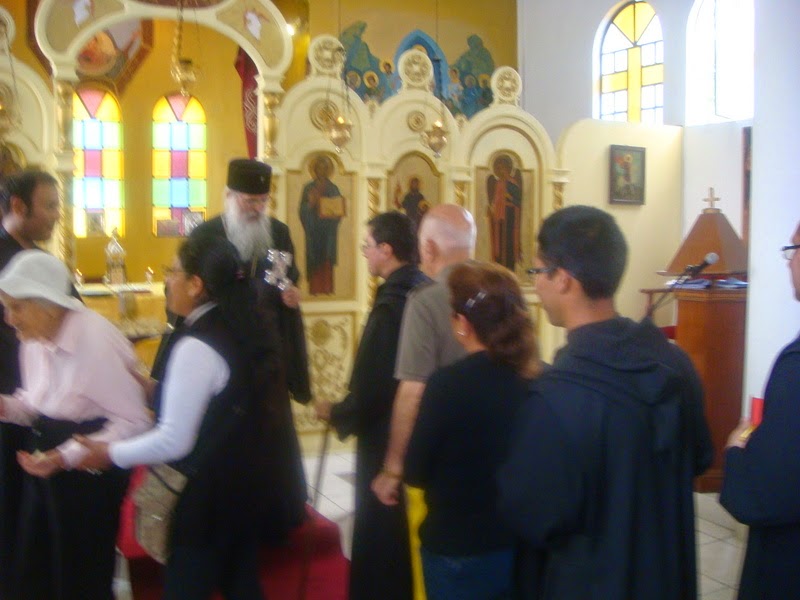 At the end of the Mass, everybody went up to kiss a crucifix and the hand that held it, in this case the hand of Metropolitan Chrysostomos, and then be given a piece of the unconsecrated bread.  Here Brother Mario is about to kiss the crucifix. 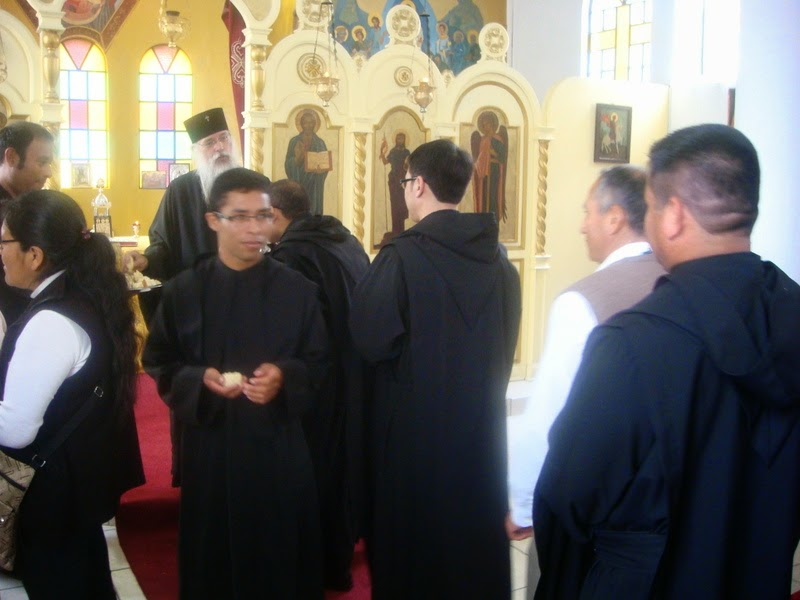 Here is Brother Ascencio coming away, Brother Percy is almost invisible, actually kissing the crucifix, while Brothers Jose Luis and Juan Edgar are waiting in line.

Afterwards, we had a chance to chat with the bishops.  Metropolitan Tarasios told us that the Pope will be visiting the Phanar at the end of November, that they would talk, as the heads of two sister churches, about common problems.   I later learned that he had studied at the Oriental Institute in Rome.

Metropolitan Chrysostomos spoke to us in Portuguese.   In a past life he had been a iconographer, and he spoke with Alex about that.   Now he has no time.  He said that he had good relations with the Benedictines in Brazil.

I cannot overstate how they made us welcome, and we hope that this will be a new beginning.

Here is a video about the assemblies of bishops that are becoming a feature of Orthodoxy, and why.   Another bit of news: it is rumoured that Pope Francis and Patriarch Bartholomew may well issue an encyclical on ecological issues together!!