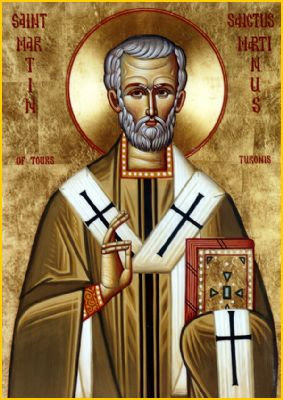 Martin was born of pagan parents in the Pannonian [modern Hungary] town of Sabaria in the year 316. His father was a Roman officer, and the young Martin was given over to military service against his will. By then, however, he was already a catechumen in the Christian Church. From early childhood he had loved the Church with all his heart.

One winter, while traveling with his companions to the town of Amiens, he saw a beggar before the town gates, almost naked and shivering from the cold. Martin felt sorry for him, and fell behind his companions. He then removed his military cloak and cut it in two with his sword. He gave one half to the beggar and wrapped the other around himself, and left. That night, the Lord Jesus Christ appeared to him in a dream, wrapped in the other half of his cloak, and said to His angels: "Martin is only a catechumen, yet behold: he has clothed Me with his garment!"

Leaving the army, Martin was immediately baptized, and then baptized his mother. He was then tonsured a monk in the diocese of St. Hilary of Poitiers and led a life of true asceticism. Martin was exceptionally humble, for which God endowed him with an abundant gift of working miracles, such that he raised the dead and drove out evil spirits. Martin was appointed Bishop of Tours against his will. After abundant labor in the vineyard of the Lord, and after a difficult struggle with pagans and Arian heretics, St. Martin gave his holy soul into the hands of his Lord in the year 397.

By what virtue have the saints been most exalted and glorified in the eyes of heaven and men? Primarily by their humility and service.

Even before his baptism, while he was still an officer, St. Martin had a servant whom he considered more a brother than a servant. He often served this servant unashamedly; in fact, he even rejoiced in it.

Again, when St. Hilary wanted to ordain him a priest, he refused this honor with tears, and begged the bishop to let him simply be a monk in some remote place.

Once, St. Martin was traveling from France to Pannonia to visit his parents. While he was crossing over the Alps, murderous robbers captured him. When one of the robbers raised his sword to behead him, Martin showed no fear, and remained motionless; he did not beg for mercy but was completely at peace, as if nothing were happening. The robber, amazed at such behavior, lay aside his sword and asked Martin who he was. Martin replied that he was a Christian, and hence, he was not afraid, for he knew that God, according to His great mercy, is always close to men, especially in times of danger. The thieves were astonished at the rare virtue of this man of God, and he who had drawn his sword against Martin believed in Christ, was baptized, and later became a monk.

When the episcopal throne in Tours became vacant, the people wanted Martin to be bishop, but Martin did not even want to hear of it. However, certain citizens of Tours craftily lured him from the monastery and carried him off. They came to the gate of Martin's monastery and told Martin that a sick man was out there with them, and they begged him for a blessing. When Martin came out they seized him, took him to Tours, and had him consecrated bishop.

In old age, he foresaw his approaching death. He told his brethren and they began to weep copiously, begging him not to leave them. The saint, seeking to comfort them, prayed to God in their presence and said: "Lord, if I am still needed by Thy people, I do not reject the labor. Let it be according to Thy holy will."

St. Martin, a child of Pannonia,
And the great illuminator of Gaul,
Despised the earthly emperor's honors,
And became a servant of the heavenly King.
The will of a powerful giant
Was in Martin's merciful heart.
Martin sprinkled himself with ashes,
And on the ashes this humble one slept,
Out of love for his God-
Crucified for sinful men.
And Martin had crucified himself to the world
Solely to reach the goal!
Martin led the battle against demons,
Yielding to none of their temptations,
And led the battle against impudent men,
Against dark, dishonorable heresies.
Martin was a knight of Orthodoxy,
And a victor, wondrous and glorious.
With the battle won, the knight rests
With the angels close to Christ the King:
And yet even now he lifts up prayers,
And comes to the aid of those in peril.

Relics of St. Martin of Tours

After a life of devoted service to Christ and His Church, the saint fell ill at Candes, a village in his diocese, where he died on November 8, 397. He was buried three days later (his present Feast) at Tours. During the Middle Ages, many Western churches were dedicated to St Martin, including St Martin's in Canterbury, and St Martin-in-the-Fields in London.

St Martin's name appears on many Greek and Russian calendars. His commemoration on October 12 in the Russian calendar appears to be an error, since ancient sources give the November date.


Just as we regard St Athanasius, St Basil the Great and St John Chrysostom as Catholic saints, so the Orthodox regard western saints like St Martin of Tours as Orthodox saints.   The more you study the saints on either side of the divide, the more it is evident that they share in the same holiness, which is the holiness of Christ himself.   Holiness isn't just extreme goodness - people do not need Christ to be good - it is the result of sharing, in Christ, the very life of the Blessed Trinity. - Fr David