Patriarch Kiril of Moscow Uses the Same Language about Western Europe as the Pope. 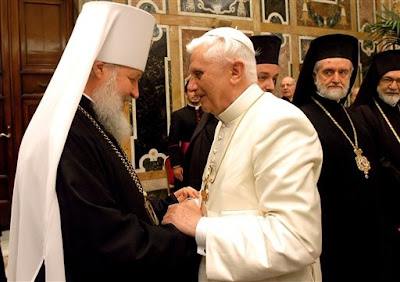 Moscow, October 13, Interfax – Patriarch Kirill of Moscow and All Russia said the situation with religion in some countries, including Europe, reminds him of the times of militant atheism in the Soviet Union.

"I am deeply convinced that modern civilization is making the same mistake as the Soviet Union. It doesn't matter very much why you are removing faith from pubic life. The final result, as engineers say, is the same: you get dismantling of religious consciousness," the Patriarch said while meeting with German President Christian Wulff in Moscow on Wednesday.

The Russian Church has lived for decades in a country where the official ideology was the ideology of atheism, "where churches were destroyed, crosses were removed from churches to be used for some secular purposes, where religious life was squeezed out of public life and could only be manifested in private, intimate life."

The people who made such policies "have very good intentions and acted on the basis of their convictions, and their convictions were very humanistic: to build a just prospering society, good future, where people would be happy and would have everything they wanted to have, but religion, those crosses on churches were getting in the way," the Patriarch said.

"It scares me that something illogical is now taking place in some countries, including in Western Europe. No one is saying that the Christian presence should be removed for the sake of a good future, but they are using a different philosophy: they want to remove crosses from schools and religion from public life in the name of human rights," Patriarch Kirill said.

He thanked Germany for "defending the legality of the presence of traditional Christian values in societal life on many issues."

Patriarch Kirill said philosophies come and go and Christian faith has existed for 2,000 years and it "formed the spiritual and cultural foundation of Europe."

"For this reason, we believe we now need to speak loudly about it, because we have a right to do that, we have lived for many years in a country that drove God from public life and we know the consequences of that," the Patriarch said.

Patriarch Kirill said the current "phenomenal revival of religious life in Russia and the other former Soviet republics is largely a reaction to that past."
__._,_.___
Posted by Father David Bird O.S.B. at 08:50