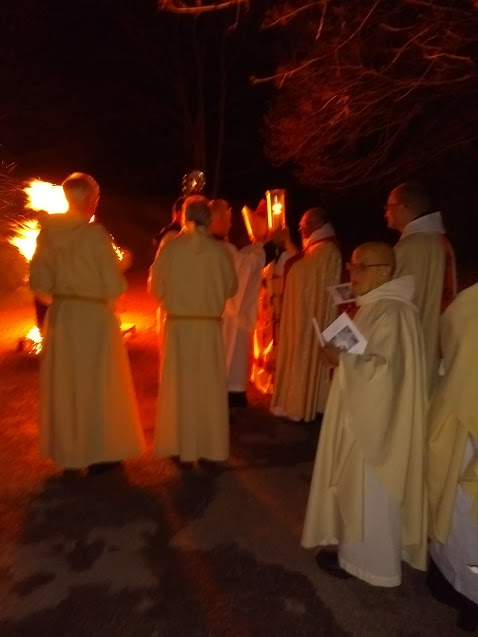 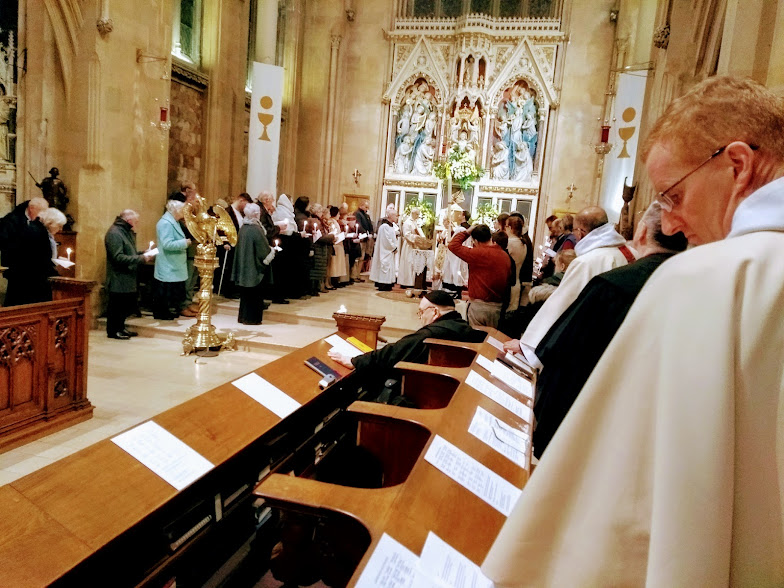 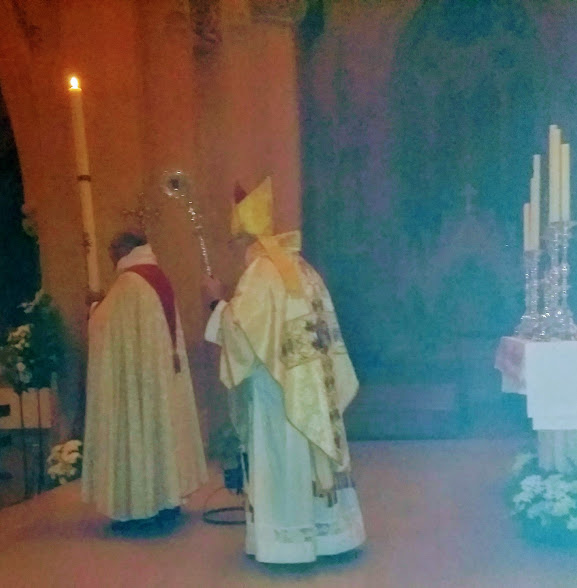 “So they went out and fled from the tomb, for terror and amazement had seized them; and they said nothing to anyone, for they were afraid.” For some unknown reason the compilers of the Lectionary omitted that final verse of St Mark’s account of the Resurrection from tonight’s Gospel reading, ending as it does with those extraordinary and unexpected words, “for they were afraid.” How strange that the three women, who had been so brave until now and had even entered the tomb on seeing that the stone, which was very big, had been rolled away, should be filled with amazement and fear at hearing the message of the Easter angel, “There is no need for alarm. You are looking for Jesus of Nazareth, the crucified. He is risen, he is not here. See, here is the place where they laid him.” 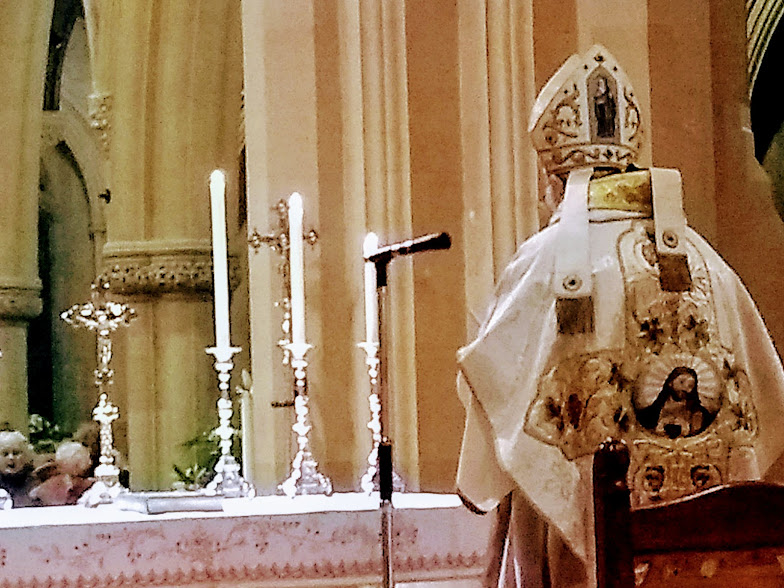 Although the women eventually did tell the disciples and Peter what “the young man in the white robe seated on the right-hand side” had said, their initial reaction was one of terror and amazement and, in fear, they fled from the tomb. What would you or I have done? Jesus had often said to his disciples, “Do not be afraid,” yet they were still afraid and confused, especially after the events of Maundy Thursday and Good Friday. Now it looked as though the Resurrection would add to their fear and confusion. But the women weren’t simply afraid, they were amazed, for they realised that there was something more than a miracle here. Now, unlike the apostles, they had been faithful to Jesus even when he was taken prisoner, condemned to death and crucified. They had stood by at a distance as he died on the cross and was buried in the tomb. It had been a rushed affair, that burial, so “when the Sabbath was over, Mary of Magdala, Mary the mother of James, and Salome, brought spices with which to anoint him.” So it was that, “very early in the morning on the first day of the week they went to the tomb, just as the sun was rising.” There they became the very first to learn of the Resurrection. Once their fears has subsided, they became the first to tell the apostles and the whole world that Jesus was risen from the dead.

The Church, this community of believers, is still here 2000 years on, because of what happened that first Easter sometime after sunset on the Sabbath and before sunrise of the first day of the week. From that moment, nothing could ever be the same again. The Angel of the Resurrection tells us tonight, “He is risen; he is not here.” Jesus, the source of all life, lies no longer in the tomb, but lives in our hearts through faith. In baptism we died with Christ in order to live with him. Do we recognise the living Christ within us? Do we see the living Christ in our neighbour? And is it possible for us to say with St Paul, “It is no longer I who live, but Christ who lives in me”? St Gregory of Nazianzus expressed it like this: “Yesterday I was crucified with Christ; today I am glorified with him. Yesterday I was dead with Christ; today I am sharing in his Resurrection. Yesterday I was buried with Christ; today I am waking with him from the sleep of death.” 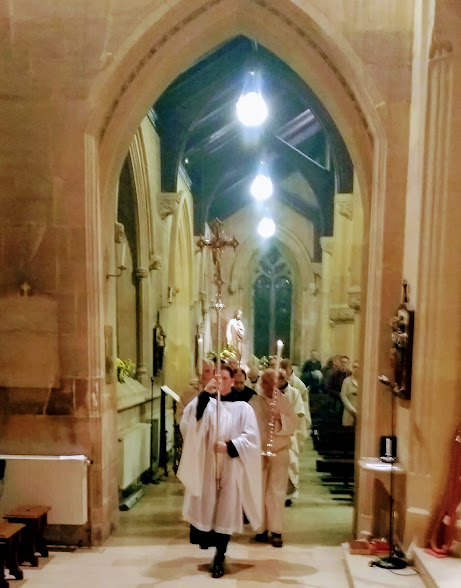 On behalf of Fr Prior and the Monastic Community, I wish you all a very happy and holy Easter. Christ is risen, alleluia, alleluia.

“Then the other disciple, who had reached the tomb first, also went in; he saw and he believed.” What did the other disciple see and believe? He saw nothing but an empty tomb with the linen cloths lying on the ground. At the end of the gospel we are told what he believed, “that Jesus is the Christ, the Son of God,” and that we have life in his Name. On that first Easter Day, the Beloved Disciple comes to faith in the risen Lord on the evidence of an empty tomb alone. The Letter to the Hebrews says, “Faith is the assurance of things hoped for, the conviction of things not seen.”

The joy and beauty of our Easter celebrations cannot alter the fact that the true significance of this day is far harder for us to appreciate than the meaning of Christmas or Holy Week. We believe that God stepped into our world at Bethlehem to become part of human history and this causes a ray of light to fall even on those who do not share our faith. Passion and death are also easy to understand. They reflect the world in which we live and our own experience of suffering. Much as we might avoid the thought, we know that death awaits us all and that one day we will succumb to a force far greater than ourselves. So we celebrate Holy Week, especially Good Friday, without difficulty, grateful that God has shared with us the anguish and pain of suffering and death. But Easter is different. In his resurrection, Jesus has not entered into the ordinary life of human beings; rather he has broken through its limitations and entered a new realm beyond our understanding. This is unknown territory. God leads us into a vast, uncharted expanse and encourages us to follow him. Since we are only acquainted with things on this side of the grave, there is nothing in our experience that connects us with the news that Jesus is risen from the dead.

Easter centres on something unimaginable and, in human thought and language, inexplicable. The disciples’ doubts and confusion cry out to us from every page of the gospels, culminating in the words of Thomas, “Unless I see the holes that the nails made in his hands and can put my finger into the holes they made, and unless I can put my hand into his side, I refuse to believe.” Then, like Cleopas and his companion on the road to Emmaus, there is their inability to recognise Jesus. Only when he is at table with them, are their eyes opened as they recognise him in the breaking of bread. One of the strangest features of the resurrection narratives is his unrecognisability. For the disciples, an encounter with the risen Christ begins as a meeting with a stranger and Jesus often condemns the inadequacy of their earlier understanding. Mary Magdalene thinks he was the gardener and asks where he has put Jesus. Rowan Williams writes, “Jesus is not what they have thought him to be, and thus they must ‘learn’ him afresh, as if from the beginning. Once again, John crystallises this most powerfully by presenting the disciples in their fishing boats, as if they had never known Jesus: they must begin again.”

Neither the disciples nor the evangelists, nor has the Church ever tried to iron out the differences between the various accounts of the Resurrection. The risen Christ was not a projection of the hopes of the first Christian community. The Resurrection of Jesus remains the greatest of all mysteries and yet it lies at the very heart of the Christian faith. “Blessed are those who have not seen and yet believe.” The Church has always translated the Easter message into symbols, which point to things that words cannot express. The Paschal fire and the Paschal candle, for wherever light conquers darkness, something of the Resurrection takes place. Water, which can be both life-giving and life-threatening, is blessed for baptism that we might die to sin and rise to new life in Christ. We bless people and things with holy water in order to establish oases of life and hope in the desert places of our world. With the constant singing of Alleluia, we join in the song of the angels in heaven, “where every tear shall be wiped away and every sorrow and lament be ended.“

Like the beloved disciple, we have seen and have believed. We do not ask to see more than an empty tomb and we must be content to recognise Jesus in the breaking of bread and hear his voice as he explains the Scriptures to us. Every day, encouraged by the celebration of the Easter mystery, we learn anew what it means to be a disciple of the Risen Saviour as we walk in faith. Faith is the greatest adventure there is, an invitation to go much further than we had anticipated or foreseen. It is a window that opens out onto eternal life. Jesus asks us not to be afraid, but to trust in him and follow him through darkness into light and from death to life. To Jesus Christ, risen from the dead, be glory and praise for ever. Alleluia. Amen.