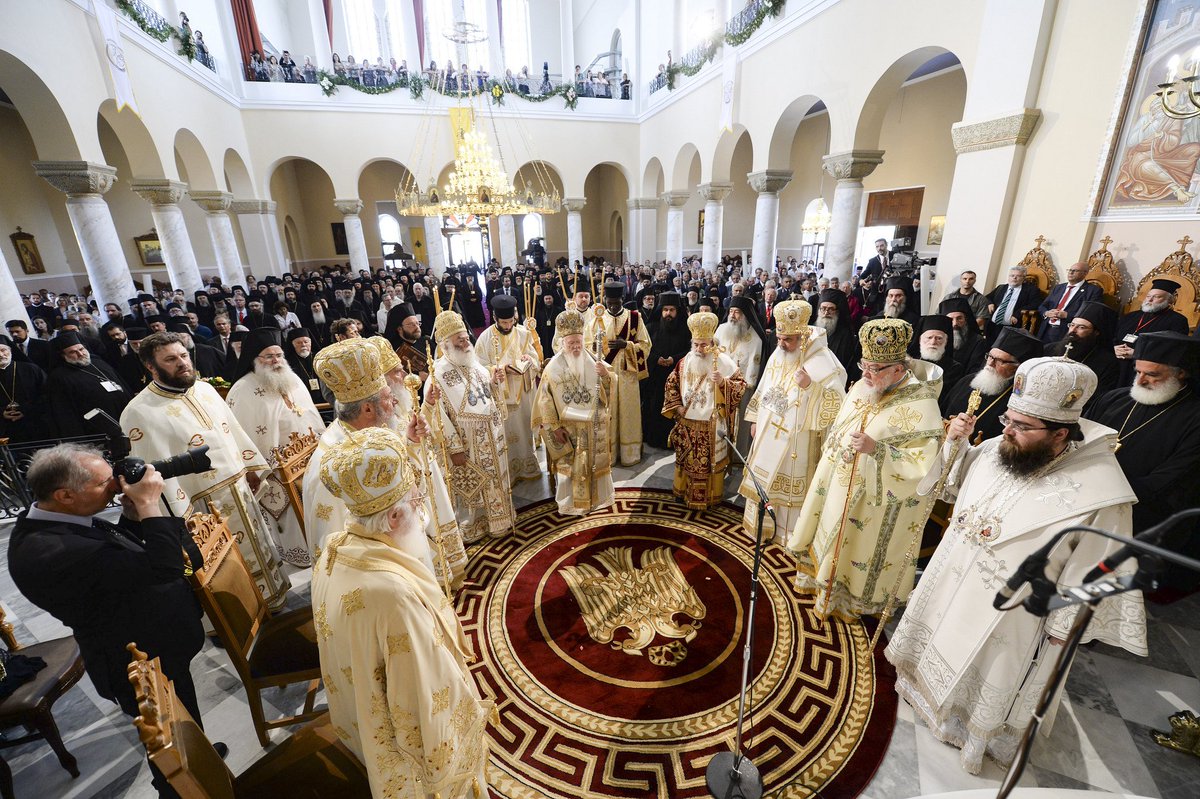 In the website CONCILIARITY AND ECCLESIAL LOVE we put together all the posts that are in my blog "Monks and Mermaids" about the two synods on the family and added material to make the presentation more complete.  This article forms part of the Introduction to SOBORNOST AND ECCLESIAL LOVE on the "Holy and Great Council" that was held at Pentecost 2016 in Crete; and it is my intention to put all the posts in my blog about this Orthodox council together with other articles and documents, almost entirely from Orthodox sources, on this other website.   This article is my contribution.  I hope the new website will be ready in about a month.

I was first introduced to Orthodoxy in the early sixties - Vatican II was in full spin - when I met Father Barnabas in a Paris street.  We were both in Benedictine habits, he because he was taking part in an Orthodox experiment in western Orthodoxy, I because I am a Benedictine.   We became friends for life.   He invited me to his monastery in Paris, and I have never forgotten the experience.

Most impressive of all were the old Russian monks.  They were gnarled and misshapen like ancient trees that have withstood strong winds ever since their planting.   They wore wide black trousers tucked into heavy boots, a black knee-length smock with a leather belt, and round black caps, their faces lined like contour maps: they looked the very personification of Holy Russia, and looked on them with reverence.  (I was already a fan of "The Brothers Karamazov.")

Father Barnabas introduced me to another guest, a Bishop Alexis van der Mensbrugghe.   He was an ex-monk of Amay (now Chevetogne) who converted to Orthodoxy and later became an Orthodox bishop and a lecturer in Church History at Oxford University.  He had an interesting theory.

He told me that one surprising fact about Orthodox and Catholic history seems to corroborate Pope John XXIII's dictum that our divisions do not extend to heaven.   He said it is a surprising thing that, in spite of the great differences between East and West, there have been movements down the ages which correspond to one another across the divide, even when there is no contact between them and no evidence that one is copying the other.   He gave two instances, but said there were others.   The first was the tendency to express spirituality in long and sumptuous liturgies, that the Byzantine liturgy reached its maturity during the time of Cluny which also went in for the same but without copying Byzantium. The other instance is the Hesychast movement that was exactly contemporaneous with the Rhineland and English mystics.  Of course they were different in theology, vocabulary and style, belonging as they did to two different religious cultures; but they were expressions of the same faith and had the same inspiration.

Of course, unlike so many Orthodox critics of Catholicism nowadays, he knew both Orthodox and Catholic spiritualities from the inside.   Like Father Lev Gillet, he had no patience with those Orthodox xenophobes who make sweeping superficial condemnations of a Catholicism they don't really know.   "Why is it that so many Russians condemn the Catholic Church in a way that only shows their ignorance!" exclaimed an Orthodox deacon to me in Minsk a few years ago,  "They often don't know any Catholics, while many of us in Belarus have Catholic relatives and all of us have Catholic neighbours.   We are looking forward to Christian unity."

Bishop Alexis died in 1980; but, if he had lived until now, I am sure he would have recognised parallels between the two synods on the family that were called by Pope Francis  and the "Holy and Great Council" called by the Patriarch of Constantinople.   I am not saying that the Catholics and Orthodox copied each other; nor did they take advice from each other; and the Catholic synods reflected the  concerns of recent Catholic history, and the Orthodox council reflected Orthodox history; and their historical experience is very different the one from the other. Nevertheless, the similarities are all the more startling when they are found, even if we have to dig deep to find them.   Here are a few:

Ecclesial love is not a romantic feeling: it is the kenosis of God by which the world is created and redeemed; It is the Father's love which we share through Christ in the Holy Spirit. It demands from us humility of heart, readiness to forgive, and respect for the other, even when we differ.  The Church asks for it at Mass in the epiclesis so that we can together find Christ in communion, his love working in synergy with ours, transforming it and leading us to true knowledge.  Christ does the rest.

The problem is further complicated by the fact that the Russian Orthodox Church may well re-create Christendom in Russia, working in synergy with the civil power.  Holy Russia is flourishing once again; even though the ignorance of the general population about the basic tenets of Christianity, the number of abortions etc, the weight of the effects of the long years of Communism, do not make the result a foregone conclusion.  The Russians must learn that Orthodoxy in a pluralistic world has its own needs and its own insights, while th whole of Christendom must await what Divine Providence has in store for Russia.