HOMILY ON PERSEVERANCE IN STABILITY By Abbot Paul of Belmont (UK)

Dear Br Augustine, you have been granted your Second Perseverance and, in fact, are now more than halfway through your Noviciate. You appear to be happy and settled at Belmont and making the most of this year of grace the Lord, in his infinite mercy, has granted you in calling you to try your monastic vocation among us. We pray that you will continue to persevere not simply to First or even Solemn Profession, but for the rest of your life, that you become a true monk and a good monk, a man of prayer, a community man, a man of God. Do not despair or give up, for whatever reason, for nothing is impossible to God. This evening, I wish to encourage you to give yourself wholly to God, to surrender your life entirely to him and to trust in him with your whole heart, mind and soul. He loves you and has called you to experience that divine love fully as a Benedictine monk, a man whose heart is fixed on God alone. So perhaps it would be appropriate to say a few words about stability, which is, after all, one of the three monastic vows and the one that really binds together obedience and conversatio morum and makes it possible to live them out on a daily basis at Belmont as in every other monastic community that follows the Rule of St Benedict.

Speaking of the Tools of Good Works, St Benedict says that, “The workshop where we are to toil faithfully at all these tasks is the enclosure of the monastery and stability in the community.” This contrasts radically with the gyrovagues, who are “in every way worse than the sarabaites,” spending, as they do, “their entire lives drifting from region to region, staying as guests in different monasteries, never settling down, but living as slaves of their own wills and gross appetites.” Because of our frail human nature, we are conscious of the constant tendency in each one of us to drift from inner discipline and the serenity of God’s presence within us towards allowing our passions to take over and dictate our actions, leading us to chaos, destruction and total disorder. Our daily crisis, indeed our daily martyrdom, is that of having to choose between heaven and hell, for we cannot take both paths and live. Today, the feast of St John Kemble, the Herefordshire martyr, we ask his intercession to be given the grace always to make the right choice and decision, even in the face of death.

Abbot Alan always liked quoting Psalm 126, v. 2, “In vain is your earlier rising, your going later to rest, you who toil for the bread you eat; when he pours gifts on his beloved while they slumber.” Yes, we believe that everything is God’s gift, but the good Lord wouldn’t be particularly happy with us, were we just to sit back and take things easy in the hope that God do everything for us. Without falling into the error of Pelagianism, we should live by the maxim of St John of Kronstadt, who wrote, “We must pray, believing that God alone can do all things for us, but we should also work as though he could do nothing at all.” How do we practise stability, then, if not by working at it, while, at the same time, trusting in God? From the beginning, God made us both to cooperate with him in the on-going work of creation, and to work with one another in order to form a community, a society and an ecclesia, which reflect the order, love and unity of the Holy Trinity. We have to work at stability, then, just as we have to work at obedience and conversatio morum. How do we work at stability? Above all and to begin with, by focussing our hearts and minds on God himself rather than on ourselves and on others, by which I mean this monastery and the monks that make up this monastic community. The brethren can become a terrible distraction if we start focussing our attention on them rather than on God and we ourselves can easily become an even greater distraction if our spiritual life is reduced to navel gazing rather than dedicated to the search for God. God, then, is the very anchor of our stability and, like the disciples descending from Tabor and the experience of the Transfiguration, our point of focus should be “Jesus only.”

Hence, it is prayer and the concentration of all our energies on prayer and a life of prayer that should be the prime movers in our quest for stability. The word, of course, derives from “stare”,  the Latin verb for to stand, to stand still, to remain standing, to be or to stay motionless, to remain unmoving. Strangely, in modern English usage, stability usually refers to the economy, to political or social situations and to the state of someone’s health. In monastic use, it may well have referred originally to the custom of standing in our places in choir. Although today we tend to do an awful lot of sitting in choir, until fairly recently monks mostly stood in their stalls, thus the need for a misericord and the name given to it. We also use the word statio for the place and act of standing and waiting for the procession to move into church. Choir is where we pray together as a conventus and celebrate the Divine Office and Conventual Mass. In some monasteries the monks like to do their mental prayer in choir, but ours in rather cramped and exposed for that. Even so, we are anchored to God and to each other in choir when we come together to pray and that anchoring continues when we dedicate ourselves to personal prayer and lectio divina. So, that is how and where stability begins.

You will ask, “But what about those monks who live outside the monastery or those who are away for whatever reason?” The Theology of the Mystical Body of Christ, which is the Church, teaches us at they are not separated from us. When they pray and when we pray, we are mystically united to one another in Christ. It is not absolutely necessary to be physically together in order to be spiritually united. It is obedience that forges true stability in the life of a monk. If one day you, Augustine, are appointed Parish Priest of Whitehaven or Chaplain to the Poor Clares, by your very obedience you will be fulfilling the vow of stability, and everything you do, think or say, every prayer you make, your very being as a monk will be integrated with the lifeblood of the Belmont Community. And this will be possible if we are all focussed on the One God and all dedicated to the adoration of our one Lord and Saviour. The vow of stability is not to a place or a building but rather to the God who lives in this place and to the community of living stones who together, through his grace, make up the Mystical Body of Christ.

It’s time to draw these reflections to an end. I have only touched on one or two aspects of this fundamental vow: there are many more, so rich is God’s goodness and mercy towards us. Our prayer for you this evening is that you will grow deeper into its mystery and practice and that through your monastic stability, like Christ nailed to the Cross, you will be a source of grace and salvation to yourself, to your brethren and to the world. Amen. 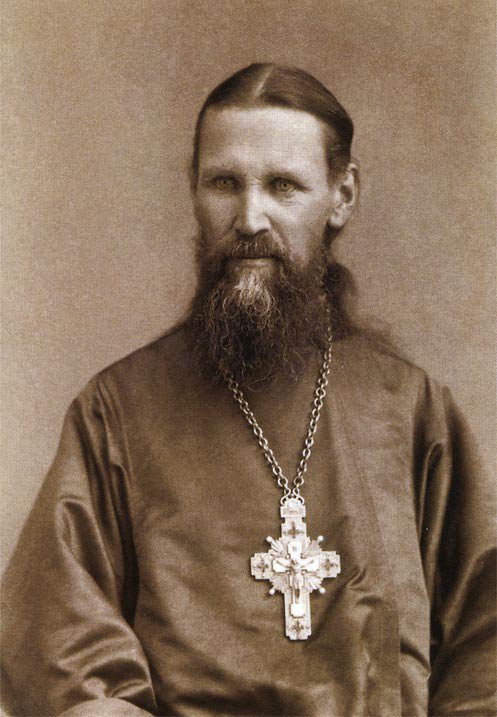 Our righteous father John of Kronstadt (Иоанн Кронштадский; October 19, 1829, in Sura – December 20, 1908, in Kronstadt) was an archpriest of the Russian Orthodox Church.
He was born as Ivan Ilyich Sergiyev (Иван Ильич Сергиев) in 1829. From 1855, he served as a priest in St. Andrew's cathedral in Kronstadt. Here, he greatly committed himself to charity, especially for those who were remote from the church, and traveled extensively throughout the Russian empire. He was a member of the right extremist movement Sojuz Russkogo Naroda (Alliance of the Russian people) but did not commit himself politically. He was already greatly venerated at the time he died. He was glorified by the Russian Orthodox Church Outside of Russia in 1964 and by the Russian Orthodox Church on June 8, 1990. St. John Maximovitch of Shanghai and San Francisco played an active role in preparation of St. John's canonization.
Many churches around the world and Ioannovsky Convent, the second largest monastery in St. Petersburg (by community size) are dedicated to St. John of Kronstadt.
His feast days are commemorated on December 20 and October 19.

Note: The quotation by St John of Kronstadt is a free rendering of a quotation by St Ignatius of Loyola, founder of the Jesuits, and was also used by Admiral Nelson as a message to the fleet before one of his (successful) battles against Napoleon: it just happens to be true!!  - Fr David