my source: S. Magister
He is not Catholic, but Pentecostal, a part of those Christian communities which are in breathtaking expansion all over the world. Little by little the pope is meeting with their leaders. From rivals he wants to become friends, to the point of asking their forgiveness 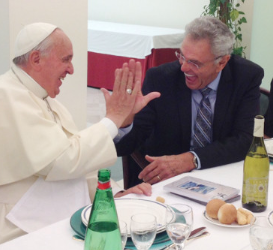 ROME, July 23, 2014 – When the news got out, and was confirmed by Fr. Federico Lombardi, that Pope Francis intended to make a private visit to Caserta to meet with a friend, the pastor of a local Evangelical community, the city's bishop, Giovanni D'Alise, was thunderstruck. He hadn't been told a thing.

Moreover, the pope had planned his visit to Caserta for the same day as the feast of Saint Anne, the city's patron. Seeing themselves snubbed, some of the faithful threatened an uprising. It took a good week to convince the pope to change his schedule and divide the trip into two phases: the first a public one with the faithful of Caserta on Saturday, July 26, and the second in private with his Evangelical friend on the following Monday.

Jorge Mario Bergoglio had made arrangements to meet with this person months in advance. He mentioned this to a group of faithful from Caserta on January 15, after a general audience in Saint Peter's Square. And he spoke of it again on June 19, during a meeting in Rome with some Evangelical pastors, including the very same friend from Caserta, Giovanni Traettino, whom he had met in Buenos Aires in 2006 for a debate when he was the archbishop of the Argentine capital.

The meeting with Pastor Traettino in Caserta is not, in fact, an isolated episode, but part of a broader effort that Pope Francis is making to win the favor of the worldwide leaders of those "Evangelical" and Pentecostal movements which especially in Latin America are the most fearsome competitor of the Catholic Church, from which they are snatching enormous masses of faithful.

"Evangelical" and Pentecostal Christians, who emerged a century ago from Protestant circles, have seen spectacular expansion. It is estimated that today they are almost one third of the approximately two billion Christians present in the world, and three fourths of Protestants. But they are also found in the Catholic Church. Last June 1 Pope Francis met in the Olympic stadium of Rome with 50,000 members of Renewal in the Spirit, the most important Catholic Charismatic group in Italy.

Three days later, on June 4, the pope had a long meeting at his residence of Santa Marta with some “Evangelical” leaders of the United States, including the famous televangelist Joel Osteen, California pastor Tim Timmons, and the president of the Evangelical Westmont College, Gayle D. Beebe.

On June 24, another meeting. This time with Texas televangelists James Robinson and Kenneth Copeland, with Bishop Anthony Palmer of the Communion of Evangelical Episcopal Churches, with John and Carol Arnott of Toronto, and with other prominent leaders. There were also Geoff Tunnicliffe and Brian C. Stiller, respectively the secretary general and "ambassador" of the World Evangelical Alliance. The meeting lasted for three hours and continued through lunch, in the refectory of Santa Marta, where the pope, amid loud laughter, gave Pastor Robinson a high five (see photo).

Copeland and Osteen are proponents of "prosperity theology," according to which the more faith grows the more wealth grows. They themselves are very wealthy and live an extravagant lifestyle. But Francis spared them the sermon on poverty.

Instead - according to what “ambassador” Stiller reported - the pope assured them: "I’m not interested in converting Evangelicals to Catholicism. There are so many doctrines we will never agree on. Let’s be about showing the love of Jesus.”

But he also told them that he had learned from his friendship with Pastor Traettino that the Catholic Church, with its imposing presence, acts too much as an obstacle to the growth and witness of these communities. And for this reason as well he thought of visiting the Pentecostal community in Caserta: "to offer an apology for the difficulty brought to their congregation."

During the pontificates of John Paul II and even more with Benedict XVI, the American “Evangelicals,” generally rather conservative, attenuated their traditional anti-papism and found points of encounter with the Catholic Church in the shared battle for the defense of religious freedom, life, and the family.

Pope Francis did not dwell on these issues in his conversations in recent weeks.

But last March the pope also met briefly, in the Rome, with the highly religious and “Evangelical” Green family, owners of Hobby Lobby, with whom the United States Supreme Court sided in a landmark decision handed down at the end of June in the lawsuit they filed against the law backed by Barack Obama that required businesses to include coverage for contraception and abortion in their employee health care plans.

LUNCH WITH THE POPE