MOST HOLY THEOTOKOS, SAVE US!! by Father Stephen (Orth) 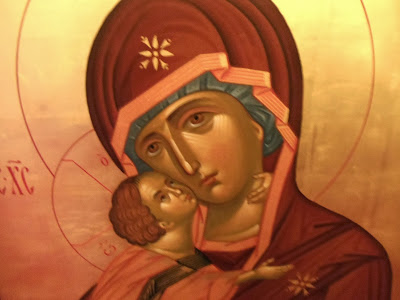 my source: Glory to God in All things
Saving Mary
by father stephen
"Most Holy Theotokos, save us!"

At these words, heard frequently in an Orthodox service, Protestant visitors often have fear and trembling in their limbs. “How can this not be idolatry?” they wonder. “How can a mere human being save me? They are worshiping Mary!”

The language of Mary’s role in the life of salvation is certainly scandalous. But the reaction reveals not the error and idolatry of the Orthodox, but the great gulf that separates contemporary Christianity from the classical Christianity of the ancient world. For the language is not idolatrous – but rather a careful theological expression of the Christian doctrine of salvation.

No one is saved alone.

I didn’t get into this mess by myself. I mean to say that the whole mess of my sin and the brokenness of my existence is not entirely my fault. Each of us bears responsibility – but none of us got here by ourselves. We are the children and offspring of sinners. We enter a broken world. Even the ugly mess of contemporary Christian disunity is not of our making. Regardless of how innocent I may enter the world (Orthodoxy holds that we are, by nature, good), I did not enter an innocent world. Born into pain and pleasure, the passions quickly become my companion, even in childhood. We are nurtured and raised by broken men and women, even at their best. Thus, my sins will not be original with me, but will often represent the collective legacy of a broken humanity.

My salvation, like my sin, is never mine alone.

God’s work for our salvation did not avoid the collective quality of our existence. He did not descend among us at a distance nor come to us in a world apart. He took flesh of the Virgin Mary and was made man. The flesh of the God/Man, Jesus Christ, is thus always Mary-flesh. There is no incarnate Son of God who is not also the incarnate Son of Mary.

This has always been the way of things – it is the “Biblical” point-of-view. The people of God are called by name – by a man’s name – “Israel.” Spiritually, we are Israel’s collective offspring. The naming of Israel reveals how God Himself sees us and calls us. He sees not only me, but Israel as well – from the dusty old desert conniver and wrestler Jacob, whose name was changed to Israel, to every mother’s son who called on God in faith. We are Israel.

And in Christ, we become Mary-flesh. “Whosoever eats my flesh and drinks my blood, abides in me and I in Him.” Christ’s flesh becomes our flesh, his blood becomes our blood. Bone of His bone and flesh of His flesh, we share in the cup of the marriage banquet.

The collective nature of traditional Christian prayers, Orthodox prayers, illustrates quality of salvation as communion. The Church is not scandalized when it prays “Most Holy Theotokos save us!” Just as the people of Canaan were not scandalized when they appealed to Mary for help in a wedding banquet gone awry. The only word spoken to Christ at that banquet was from His mother, “They have no wine.” His answer (often badly translated) is very intimate, “Woman, what is this between you and me? My time isn’t here yet.” But at her direction, “Do whatever he tells you,” the wedding feast arrives.

At such an occasion it was right to say, “Most Holy Theotokos, save us!” The words “save us,” have become, in contemporary Christian speech, synonymous with the whole plan of salvation accomplished in the death and resurrection of Christ. But modern Christians did not invent Christian speech – they have only altered it. The language of Orthodoxy is the ancient language of the Church. The cry: “Most Holy Theotokos, save us!” has always meant, “Help us!” and nothing more. And help us, she has, and does.

The confusion between prayer and worship is itself worth noting. The word “pray” is by no means a “worship” word. It has become so only because of evolution within the English language. The older English phrase, “I pray thee, sir…” never meant more than a polite way of saying, “Please…” The word to pray means to ask – nothing more and nothing less. We pray to God, because we ask God. But I ask you for a drink of water, I am praying as well. And regardless of how good your water might be, I have no intention of offering you worship in exchange for it.

We are not saved alone. We still feast on Mary-flesh and partake of a banquet provided by her Son at her request. And we still do well to obey her simple command, “Do whatever He tells you.”

Of course, it is possible for Christians to pray without making mention of Mary. It was always possible for Israel to bear another name and to speak to God by something other than “the God of Abraham, Isaac and Jacob.” But we have not been taught in such a manner. The radical individualism of modern Christianity distorts the account of our salvation. It flees from Mary when it should run to her.

In the parable of the Rich Man and Lazarus, Christ offers a very different picture. Heaven itself, Paradise, is described as “Abraham’s bosom,” and is pictured as nothing less than feasting, laying on the breast of Abraham (much like St. John did on the breast of Christ at the Last Supper – it is the most intimate position at a feast). And though the topic of conversation from the Rich Man (who has been cast into Hades and is torment) is everlasting life and relief from the torment of his position, his “prayer” is directed to Abraham. Nowhere in the story does Christ suggest that such a scene is marred by the content or object of the Rich Man’s prayer. He offers the story in a manner that can only suggest that His hearers are not in the least confused.  Jewish sensibilities seemed quite accustomed to such an image.

It is contemporary Christianity that has lost this sensibility. Orthodoxy did not add something that was not already present. It’s prayers, quite ancient, are a living representative of the ancient sense of salvation. The oldest known record of a hymn to Mary, is a papyrus fragment that dates to around 250 a.d. Its existence has to be taken as evidence not of its being written in 250 a.d., but written and circulated widely enough to have offered even the chance of such a scrap being found. It words are still a popular hymn within the Orthodox and Catholic Churches.

Beneath your compassion,
We take refuge, O Theotokos:
do not despise our petitions in time of trouble:
but rescue us from dangers,
only pure, only blessed one.

Why should the Orthodox apologize for praying in the words of the fathers?

I have given in to the temptation to publish one of Fr Stephen's posts.   For a long time, I have read with pleasure his thoughts and understandings on the Catholic Faith, my faith, all the more useful for the novelty that comes from the fact that he is Orthodox and, therefore, has a different way of looking at things, a difference that I have found immensely enriching; and he expresses it is excellent English.

I am all too aware that Catholicism and Orthodoxy are not yet ready to be united, that there are still some areas of Christian teaching where our understanding is different; but as both sides share a living relationship with the same Christ, by the power of the same Holy Spirit, and both sides are embraced by the same Theotokos, I expect we shall find, hidden in that which we share in common, the answer to the conflict that we have both inherited.

Hail, Holy Queen, Mother of Mercy, our life, our sweetness and our hope! To thee do we cry, poor banished children of Eve. To thee do we send up our sighs, mourning and weeping in this valley of tears! Turn, then, O most gracious Advocate, thine eyes of mercy toward us, and after this, our exile, show unto us the blessed fruit of thy womb, Jesus. O clement, O loving, O sweet Virgin Mary.

WATCH THIS FROM MONSERRAT - BEAUTIFUL!