SECOND AUGUST THEME: NINE POSTS ON THE BLESSED VIRGIN TO CELEBRATE THE ASSUMPTION. 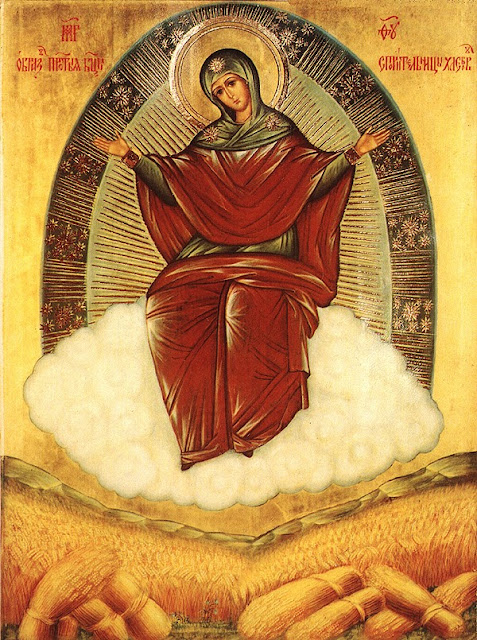 "And therefore she died in private. It became Him who died for the world, to die in the world's sight; it became the Great Sacrifice to be lifted up on high, as a light that could not be hid. But she, the lily of Eden, who had always dwelt out of the sight of man, fittingly did she die in the garden's shade, and amid the sweet flowers in which she had lived. Her departure made no noise in the world. The Church went about her common duties, preaching, converting, suffering; there were persecutions, there was fleeing from place to place, there were martyrs, there were triumphs: at length the rumour spread abroad that the Mother of God was no longer upon earth. Pilgrims went to and fro; they sought for her relics, but they found them not; did she die at Ephesus? or did she die at Jerusalem? reports varied; but her tomb could not be pointed out, or if it was found, it was open; and instead of her pure and fragrant body, there was a growth of lilies from the earth which she had touched. So, inquirers went home marvelling, and waiting for further light. And then it was said how that when her dissolution was at hand, and her soul was to pass in triumph before the judgment seat of her Son, the Apostles were suddenly gathered together in one place, even in the Holy City, to bear part in the joyful ceremonial; how that they buried her with fitting rites; how that the third day, when they came to the tomb, they found it empty, and angelic choirs with their glad voices were heard singing day and night the glories of their risen Queen. But, however we feel towards the details of this history (nor is there anything in it which will be unwelcome or difficult to piety), so much cannot be doubted, from the consent of the whole Catholic world and the revelations made to holy souls, that as is befitting, she is, soul and body, with her Son and God in heaven, and that we are enabled to celebrate not only her death, but her Assumption."
(John Henry Cardinal Newman, Discourses to Mixed Congregations, pp. 375-8; cited in J. Regina, ed., The Mystical Rose, St. Pauls Editions, 1960, pp. 91-94.) 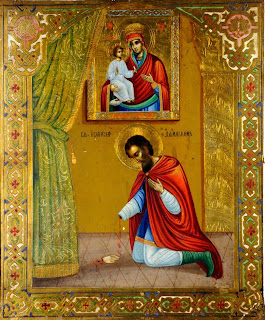 ST JOHN DAMASCENE ON THE ASSUMPTION OF THE BLESSED VIRGIN (CLICK) 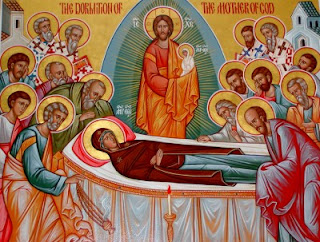 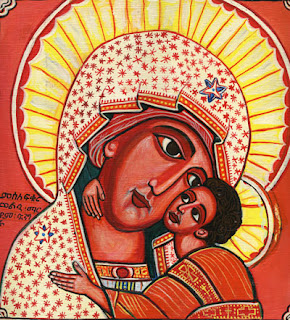 OUR LADY THEOTOKOS IN THE ETHIOPIAN ORTHODOX TRADITION (CLICK) 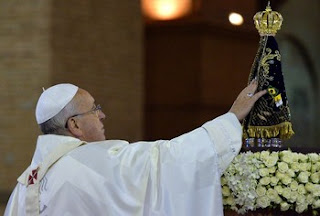 THE LARGEST MARIAN SHRINE IN THE WORLD: OUR LADY OF APARECIDA (BRAZIL) (CLICK) 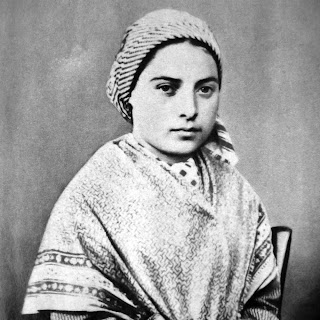 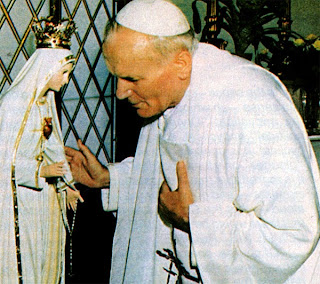 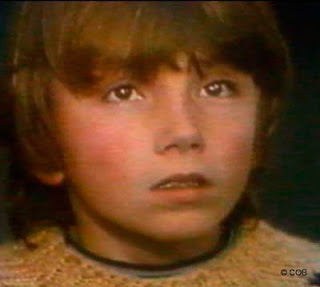 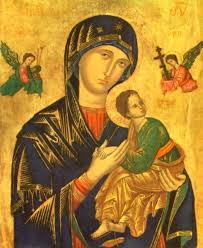 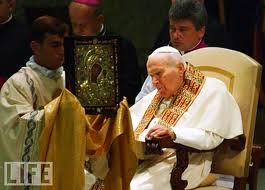 THE ICON OF OUR LADY OF KAZAN, PROTECTRESS OF MOSCOW
( and its connection with Fatima) (click) 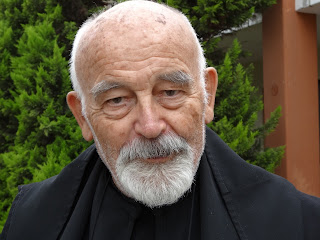 This list of shrines and icons of Our Lady is, of course, incomplete; and I shall be adding to it from time to time.   I have left out the second largest Marian shrine, Guadalupe, because, if God wills, I shall be going there in the next few months and shall write about it when I get there.

Greetings to Andrew Grant who paid for my pilgrimage to Medjugorje in 1990, and to Jean Cornfoot - not a hobbit but a nurse - and the Middlesborough Pilgrimage to Lourdes who more than out up with me a few years ago.   I hope to taste their Yorkshire beer the next time I am in England.

ABBOT PAUL'S HOMILY ON THE ASSUMPTION 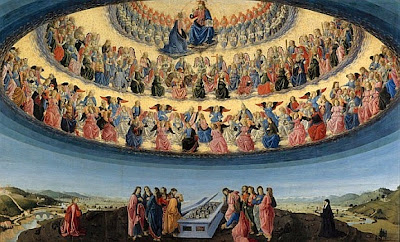 The Assumption of Our Lady 2013

When we say the Litany of Loreto, we invoke Our Lady with all those marvellous titles, mostly biblical, that Christians have given her over the centuries. Among them she is called Queen, Queen of Angels, Queen of Patriarchs, Queen of Prophets and so on. I have always been intrigued by that title Queen of Prophets. What can it mean? In today’s Gospel, which recounts the Visitation, Elizabeth says to Mary, “Blessed is she, indeed, who believed that the promise made her by the Lord would be fulfilled.” That is precisely why she is called the Queen of Prophets. She believed that God would fulfil his promise, “You shall bear a Son.” Because of her faith, she was blessed by God and was justified. “Blessed art thou among women.”

Mary is the greatest prophet in the Bible. The prophets of old believed in the word of the Lord. They believed with such conviction in his promises that they preached that word fearlessly to the people of Israel and her rulers. Think of Jeremiah, or Elijah and Elisha. What is a prophet but one who hears, listens, believes and proclaims?  But Mary went much further than that. Because of her assent to God’s word, the expression of his will, she was able to respond, “Behold the handmaid of the Lord. Let it be done unto me according to thy word.” God’s Word became, in her womb, the Word made flesh, and she proclaimed God’s glory not only in her hymn of praise, the Magnificat, “My soul proclaims the glory of the Lord”, but in the Virgin birth itself. “Blessed is the fruit of thy womb, Jesus.”

Mary’s participation in the Incarnation goes far beyond the conception and birth of her Son, our Lord and Saviour Jesus Christ. Her participation in the Mystery of the Incarnation is total. She took part in his ministry on earth and is now Mediatrix of all graces in heaven. At the marriage feast of Cana, she asks her Son to perform a miracle, the first sign, and instructs the steward, “Do whatever he tells you.” On Calvary, at the foot of the cross, a sword pierces her heart as she suffers in her own flesh the Passion of her Son. The Church, the community of disciples, is entrusted to her care in the person of the Beloved Disciple. As they await the coming of the Holy Spirit, there she is, at the heart of the Church, praying with them. And we believe, for it is the ancient belief of an undivided Church, that she was the first, at her Assumption, to share fully in the Resurrection and Ascension of Jesus Christ. That is why today’s feast is known as Little Easter and in some countries Catholics fulfil their Easter duty.

The Assumption was a prophetic act, for on the Last Day we too will go where she has gone before us. Mary is a prophetic icon of what the whole Church will be, when the New Heaven and New Earth become reality. On the Last Day the dead will rise from their graves and our bodies, long returned to the dust from which they came, transfigured and glorified, will be assumed into heaven and reunited with our souls. We will take our place with Mary at the Father’s right hand in the Kingdom of Heaven. Like her, we too will receive a crown of glory.

On the feast of the Assumption I always think of Charles Wesley’s magnificent hymn:

Finish then thy new creation,
Pure and spotless let us be;
Let us see thy great salvation,
Perfectly restored in thee,
Changed from glory into glory,
Till in heaven we take our place,
Till we cast our crowns before thee,
Lost in wonder, love, and praise.

Interestingly, before 1854 those words “pure and spotless” always referred to the Immaculate Conception. I think all those churches in Spain and Latin America dedicated to the “Virgen pura y limpia” and in Italy to “la Purissima”. Of course, the Assumption is the logical conclusion to the Immaculate Conception, the ultimate tying up of loose ends, as St Anselm so beautifully explains. The Preface of the Mass puts it this way: “Today the Virgin Mother of God was assumed into heaven as the beginning and image of your Church’s coming to perfection and a sign of sure hope and comfort to your people.”


Obviously, getting to heaven is not an easy matter. There is the question of our obedience and submission to the will of God. How often have you and I said “Fiat” and then turned our backs on God? In Mary there is consistency and integrity, no breach between word and action. Then there is the problem of sin and evil, which has to be solved and put right in each one of us. We need to confess our sins and have them forgiven. We need to die each day to sin in order to live for God. We need to take up the cross and joyfully follow Christ wherever he may lead us. In this daily struggle may Our Lady, Queen of Prophets, pray for us and encourage us ever onward, ever upward, “from glory into glory”, until with her “we cast our crowns before thee. Lost in wonder, love, and praise.” Amen. 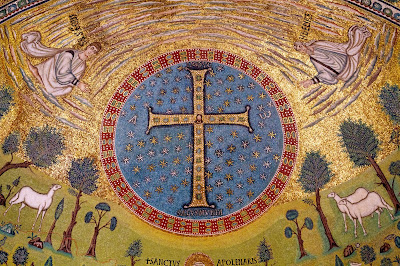 FIRST AUGUST THEME: TEN POSTS ON THE MYSTERY OF THE TRANSFIGURATION OF OUR LORD.  For access, please click here.
Posted by Father David Bird O.S.B. at 09:26