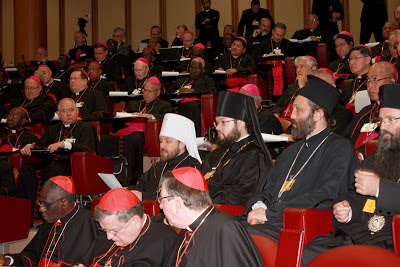 source: Russian Orthodox ChurchOn 16 October 2012, Metropolitan Hilarion of Volokolamsk, chairman of the Moscow Patriarchate’s Department for External Church Relations, currently on a visit in Rome with the blessing of His Holiness Patriarch Kirill of Moscow and All Russia and at the invitation of the Pontifical Council for Promoting Christian Unity, attended a plenary session of the 13th World Synod of Bishops of the Roman Catholic Church as an observer of the Russian Orthodox Church.

At the evening session hold in the presence of Pope Benedict XVI and 242 members of the Synod, Metropolitan Hilarion addressed the audience with the following greeting:

Your Eminences and Excellencies:

May I address you on behalf of His Holiness Patriarch Kirill of Moscow and All Russia and the Russian Orthodox Church with apostolic greeting: ‘Grace to you and peace from God our Father and the Lord Jesus Christ’ (2 Thess 1:2).

1. The present Synod of Bishops of the Roman Catholic Church is timed to the remarkable date – the 50th anniversary of the beginning of the Second Vatican Council and is dedicated to a theme relevant to all Christians – the sermon of Christ in the secular world. Half a century ago the fathers of the Council were well aware that closer cooperation among Christians of different traditions would make witness to Christ more convincing.

2. The Second Vatican Council made a substantial contribution to the development of inter-Christian dialogue and indeed laid the foundation of official relations between the Roman Catholic Church and the Orthodox Churches. Our presence at the Synod of Bishops of the Roman Catholic Church bears witness to it. Today we are called to think about solving our common tasks that the present epoch puts forward.

3. The unrestrained pursuit of pleasure and the lust for irresponsible enrichment at the expense of the poor sections of the population were characteristic of the developed societies of Europe and America in recent decades. Individualism and egoism have brought about crisis not only in human and social relations, but also in politics and economics. The crisis which the Western society is undergoing has primarily spiritual roots. Secular society without God naively believes that while exploiting only their own proprietary and consumer instincts it would be able to successfully regulate the growth of well-being, thus achieving prosperity and justice. However, the tragic experience of the entire 20th century has vividly shown that the renunciation of God and His commandments does not lead people to happiness, but, on the contrary, brings about numerous disasters and sufferings. The present crisis, which has affected many countries of the world, shows that the secular society has chosen an erroneous way of development.

4. Both the Russian Orthodox Church and the Roman Catholic Church fulfill the mission to which they have been called by Christ and tirelessly bring witness of the truth, while ‘proving the world wrong about sin and righteousness and judgment’ (Jn 16:8). In this ministry our Churches become even more conscious of the necessity of combining our efforts so that the Christian answer to the challenges of the modern society can be heard. In recent years, the Orthodox and Catholic Churches have fruitfully cooperated within the Orthodox-Catholic forum, in different international organizations and at other places of dialogue with the secular world. Yet, I believe, we could and should do much more to respond together to new challenges and threats.

5. I would like to use this opportunity to call my brothers in the Catholic Church to create a common front in order to defend Christian faith in all those countries where it is being marginalized and persecuted. In Europe and America we witness growing pressure from those representatives of militant secularism and atheism who attempt to expel Christianity from the public sphere, to ban Christian symbols, to destroy traditional Christian understanding of the family and marriage as a union between a man and a woman, of the value of human life from inception till natural death.

6. In some other parts of the globe the very existence of Christian Churches is under threat. In the countries where the so-called ‘Arab spring’ is underway millions of Christians suffer from severe persecution. Many have fled from the places where they had lived for centuries. In Iraq, where 1,5 million Christians lived just a few years ago, only 150 thousand remain, while all the others were either exterminated or expelled. Grave persecutions of Christians are going on in Egypt, Lybia, Afghanistan, Pakistan, Nigeria, India, Indonesia and many other countries, both in the Middle East and elsewhere.

7. We are deeply concerned about the humanitarian catastrophe which is unfolding in Syria, where militant Islamists are seeking political power with the help of some Western countries. Wherever they come to power, Christians are being persecuted or exterminated. Christian communities in Syria and other countries of the Middle East are crying for help, while the mass media in the West largely ignore their cries and the politicians prefer to close their eyes on this unprecedented wave of persecution.

8. We, Orthodox and Catholics from all over the world, should raise our voice in defense of Christian population and Christian heritage of the Middle East. We must constantly bring the attention of political leaders, of international organizations and of the mass media to this unfolding human tragedy.

9. Only if we join our forces shall we be able to protect our Christian faith, to overcome present crisis and to give new impetus to our common mission of the new evangelization, ‘so that the world may believe’ (Jn 17:21).

I wish you peace, God’s blessing and success in your work! 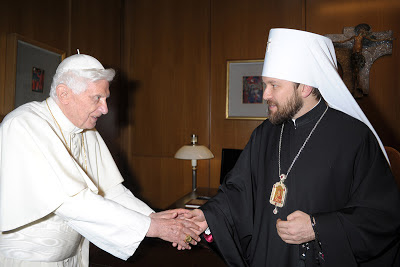 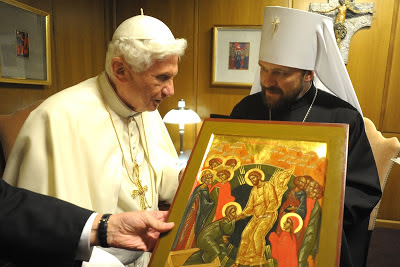 
On 16 October 2012, Metropolitan Hilarion of Volokolamsk, chairman of the Moscow Patriarchate’s Department for External Church Relations, met with Pope Benedict XVI at the Vatican after the session of the Synod of Bishops of the Roman Catholic Church, at which the DECR chairman delivered greetings.

Metropolitan Hilarion conveyed best wishes to Pope Benedict XVI from His Holiness Patriarch Kirill of Moscow and All Russia. The Pope wished the Primate of the Russian Orthodox Church God’s help and success.

A wide range of issues was touched upon in the talk Metropolitan Hilarion answered question of the head of the Roman Catholic Church, telling him about the present situation of the Russian Orthodox Church, the election of bishops and establishment of new metropolias, about theological schools and monasteries, the extension of missionary and educational activities of the Church, the teaching of the fundamentals of religious culture and secular ethics in schools, and about the opening of the chairs of theology in secular educational institutions.

Metropolitan Hilarion also told Pope Benedict XVI about the work of the Moscow Patriarchate’s Synodal Biblical and Theological Commission he heads and about his meeting with the newly appointed prefect of the Congregation for the Doctrine of the Faith, Archbishop Gerhard Ludwig Müller, which took place earlier the same day. The DECR chairman expressed his hope for the development of relations between the Russian Orthodox Church and the Roman Catholic Church in theological research.

Also discussed was the desecration of Christian holy sites in different countries and the act of vandalism at the Cathedral of Christ the Saviour in particular. Pope Benedict XVI expressed solidarity with the position of the Russian Orthodox Church and also his bewilderment over the reaction of the certain mass media to the events.

The persecution of Christians in different parts of the world was an important theme of the talk. Metropolitan Hilarion underscored that the protection of Christian heritage in the Middle East and other countries where Christians are discriminated and persecuted is a common task of the Orthodox and the Catholics.

Metropolitan Hilarion presented Pope Benedict XVI an icon “The Descent into Hell” painted by protodeacon Alexiy Trunin and introduced his suite consisting of hieromonk Antoniy (Sevryuk), secretary of the Administration of the Moscow Patriarchate’s parishes in Italy, and deacon Alexiy Dikarev, a staff member of the DECR secretariat for inter-Christian relations.