THE IMPORTANCE OF SUNDAY by St Nikodemos the Hagiorite 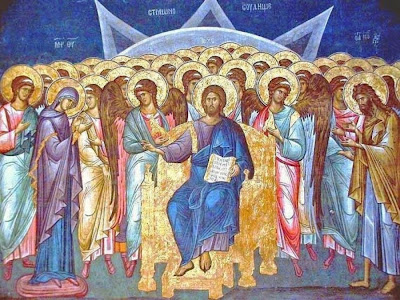 Brethren, we shudder when we think about the lofty and great and wondrous prerogatives of the resurrectional day of Sunday, which are these:

1) Sunday is the beginning of the Creation of the cosmos, on which day the Father especially acted, while co-operating with the Son and the Spirit.

2) Sunday became the beginning of the renewal of Creation, on which day the Son especially acted through His resurrection.

3) Sunday is the perfection of Creation, on which day the Holy Spirit especially acted, descending on Sunday in the likeness of fiery tongues, and enlightened and perfected the Apostles.

Behold how much the whole Holy Trinity honored the holy day of Sunday!

4) Sunday is the eighth day: a) Because it is numbered after the seventh day, and it superseded the seventh day of the Jewish Sabbath, according to Athanasios, Basil, and Gregory the Theologian in their reference to the inscription of the sixth Psalm. b) Because the resurrection of the Lord occurred on Sunday, being the eighth resurrection numbered after the previous seven resurrections, according to Gregory Palamas of Thessaloniki. Three resurrections occurred in the Old Testament: one by Elias, and two by Elissaios. Four occurred by the Lord: the daughter of Jairus, the son of the widow, Lazaros, and those who were resurrected on Great and Holy Friday. Therefore, the Lord’s resurrection is the eighth. c) It is called the eighth day because the Lord rose on the eighth day and appeared to the Apostles, and again, after eight days, He appeared to them, Thomas being present. d) Because all of the other Feasts of the Lord are celebrated only one time per year, but Sunday is celebrated every eight days, therefore it is celebrated fifty two times a year. Behold how much more exalted and supreme Sunday is over the other Feasts!

6) Sunday is an icon and a prelude of the future age. Wherefore Basil the Great, wondering why Moses called it “one” and not “first,” says: “Thus it is in order that you may carry your thoughts forward towards the future life, that he marks by the word ‘one’ the day which is the icon of eternity, the first-fruit of days, the contemporary of light, Holy Sunday, honored by the resurrection of our Lord.” And Gregory of Thessaloniki says: “We call Sunday the new and first of all days. But Moses did not name it ‘first,’ but ‘one,’ as superseding all the other days, and being a prelude of the future age: one never-setting day.” Gregory the Theologian, in his Homily on Pentecost, said: “Seven being multiplied by seven generates fifty, minus one day, which we borrow from the age to come, at once the eighth and the first, or rather one and indestructible. For the present sabbatism of our souls can find its cessation there, that a portion may be given to seven and also to eight.”

9) The general resurrection of the dead will occur on Sunday, and not on another day. Wherefore Gregory of Thessaloniki said: “Sunday is so sublime and sacred, on account of the supremely blessed end and the hoped-for common resurrection of all that will take place on Sunday.”

10) The Righteous will enter into the perfect rest of that eternal and absolute life on Sunday, according to the same Saint: “On Sunday will be the perfect entrance of the worthy into divine rest, and the dissolution and restoration of the entire cosmos.”

11) Now, Sunday is an icon of the future age; then, it will be in truth the eighth age, for on Sunday the Second Coming will happen, as the divine Maximos said above, and the resurrection of the dead, and the delightful rest of the Righteous, as Gregory of Thessaloniki said. Many Saints say that the Lord, the never-setting Sun of Righteousness, will come at midnight on Sunday, as this is inferred from the Gospel passage which says: “And at midnight there was a cry made, Behold, the Bridegroom cometh; go ye out to meet Him” (Mt. 25:6). The reason being that once that Sunday is illumined by the rays of Christ the spiritual Sun, it will never again see the evening, but it will be one never-setting day, without any successor, and eternal unto the ages of ages. Wherefore Basil the Great said: “The great day of the Lord (that is, the Sunday on which the Second Coming will occur, as we said above), not the day that the physical sun will bring, but the day that the rising Sun of Righteousness will exceedingly illumine, will be one and unending, having no successive night, but extending forever unto the ages.” And again: “And only the Lord will be exalted on that final day of all days, which day neither night will interrupt, nor time confine, nor will physical light give a beginning and end to it, but it is one, unmovable, never-setting, and perpetual.” And again, in his commentary on the six days of Creation he says: “This day without evening, without succession and without end is not unknown to Scripture, and it is the day that the Psalmist calls the eighth day, because it is outside this time of weeks. Thus whether you call it day, or whether you call it eternity, you express the same idea. Give this state the name of day; there are not several, but only one. If you call it eternity still it is unique and not manifold.”

In agreement, the brother of Basil the Great, the divine Gregory of Nyssa, also says: “When the time of weeks comes to an end, the eighth day (which is Sunday) will come after the seventh. And we call it ‘eighth’ because it follows the seventh, without however permitting itself to be superseded by any other number. For one day remains forever and the darkness of night will never interrupt it. For another Sun brings that day, which flashes the true light. When that Sun has illumined us but one time, as the Apostle says, it will never hide in the west again, but after it has embraced everything, it ceaselessly sends its light upon the worthy, upon which no darkness will follow, and those who participate in that light are made into other suns, as the Word says in the Gospel: ‘Then the righteous will shine like the sun’ (Mt. 13:43).”

And John of Damaskos says: “Eternal life and eternal hell prove that the age to come is unending. For time will not be counted by days and nights after the resurrection, but there will rather be one day with no evening (Sunday, that is), wherein the Sun of Righteousness will shine brightly on the Righteous, but for the sinful there will be night profound and limitless.”

All of these Fathers which have been quoted concerning the eighth and one day of the future age spoke of Sunday as the eighth and one day, according to Moses and the divine teachers, as was shown above. For this reason the Church of Christ also considers the whole of Bright Week as one brilliant Sunday in order to show by this that this entire seventh age of this present life will become one day, the eighth, that is, Sunday, which will be that eighth age of the future life.

12) We add a twelfth prerogative to the already mentioned eleven prerogatives of Sunday: the name of Sunday itself. Even if all of the other days of the week belong to the Lord, being His creations, none of them, however, bear His Name, for only that one and eighth day was worthy to be named Kyriaki [the Lord’s Day] after the Lord Himself. First, because on Sunday, and no other day, the Lord’s resurrection occurred. Second, because that day, apart from all of the other days, is especially consecrated to the Lord.

Do you see, brethren, the lofty prerogatives? Do you see the great prerogatives? Do you see the wondrous prerogatives of the resurrectional day of Sunday? These lofty and great prerogatives of Sunday, then, we fear to violate and to contravene. We fear to ascribe any dishonor to Sunday, the day so honored by the Holy Trinity. We fear to introduce the things of the seventh into the eighth. We fear to inject the shadow and the type of the Sabbath into the truth and perfection of Sunday, as Gregory Palamas designated it. We fear not offering the proper honor to the icon of the future age, for “the honor given to the icon passes to the prototype,” just as, contrarily, the dishonor given to the icon is brought upon the prototype. Sunday is “the chosen and holy day,” as St. John of Damaskos writes, for according to Moses, “the eighth day shall be chosen and holy unto you” (Leviticus 23:36).

THE ICON FOR JULY
(thenks to St Elias) 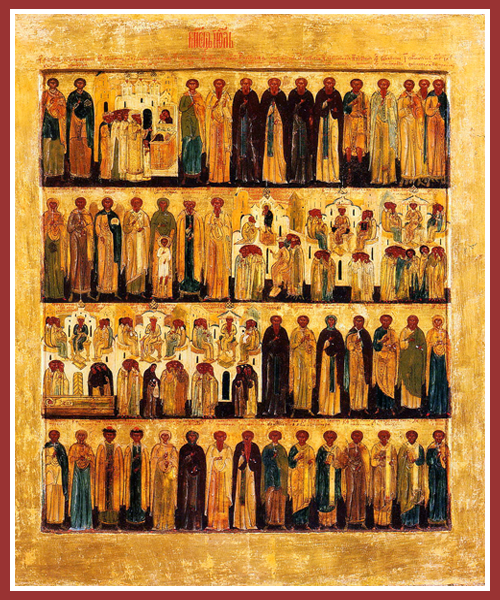 THE DESCENT OF THE RELICS OF ST WALTRUDE IN MONS, BELGIUM