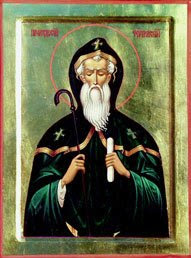 Towards the end of the thirteenth century, in the region of Trnovo in Bulgaria, a great Saint was born—one who is rather unknown in our country: St. Theodosios the Hesychast.

From his youth he was most pious and devout, and at a young age dedicated himself to God, choosing the holy monastic life in a monastery near Vidin. At his tonsure he was named Theodosios. He was adorned with many virtues, but chiefly with holy humility, the foundation of all the others.

After the repose of his Spiritual Father, he began searching for a new guide to the godly way of life, aflame with desire for silence and prayer.

Then, in 1331, he heard of the arrival in Bulgaria of the renowned St. Gregory of Sinai, who, along with his disciples, brought the hesychastic tradition from Sinai, Crete, and the Holy Mountain—which he had left, owing to barbarian incursions—to Bulgaria. From there, hesychasm spread and gave rise to a significant spiritual blossoming throughout the Balkans in general, and later in Russia.

St. Theodosios hastened to unite himself with the newly arrived Byzantine Hesychasts, to whom he submitted himself with utmost humility, learning through experience the mystery of the knowledge of God (θεογνωσίας) and reaping the sweet fruits of watchfulness (νήψεως) and prayer of the heart.

Turkish invaders, however, began to make threatening appearances in this region of Paroria, as it was called, at the boundaries between the Roman Empire and Bulgaria. The Hesychasts were forced to seek aid and protection from the Bulgarian King, John Alexander (1331-1371). This was granted through the intercessions of St. Theodosios, whom the king knew and admired. Thus, the king readily placed the monks under his protection and, for their sakes, built four monasteries with defensive towers.

When St. Gregory of Sinai reposed in the Lord in 1346, the multinational brotherhood of monks requested St. Theodosios to assume the Abbacy. The Saint declined and departed with certain other brothers (among them the great Greek-Bulgarian Saint, St. Romilos, whom our Church commemorates on 18 September) for the Holy Mountain.

But there, too, their hesychastic sojourn was of short duration because the barbaric invaders obliged them to move yet again. St. Theodosios first went to Thessalonica, then to the Skete of the Venerable Forerunner in Veria, and later to Constantinople. Finally, the Saint returned to his homeland and between 1348 and 1350 built a monastery on Mt. Kilifarevo, near Trnovo, with generous aid and subsidy from the king.

At that time, St. Theodosios had a vision of a mountain covered with sundry flowers and a great variety of wondrous trees with diverse and beautiful fruit. A radiant man was ordered to pick the fruit. The Saint understood that the vision revealed the future glory of the place and that that wilderness would be filled with monks who would bear a rich crop of virtues for the Heavenly Cultivator. 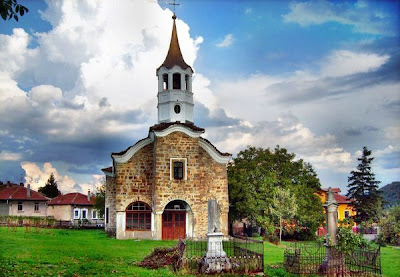 And, indeed, for at least half a century the Monastery of St. Theodosios was distinguished as a beacon of faith and virtue and as a center of spiritual renewal. Fifty or so disciples gathered around the Saint—illustrious men adorned with virtues and talents and with godly and worldly wisdom, so that the Monastery of Kilifarevo would justly be characterized as the “University of Medieval Bulgaria”!

The monastery was founded on the spiritual precepts of St. Gregory of Sinai. Obedience, charity, good administration and management, the cultivation of silence and noetic prayer predominated. A great emphasis was also placed, however, on culture and education: the copying of manuscripts, the translation of Patristic texts into Slavonic, calligraphy, the teaching of the liturgical arts, etc.

Among the renowned disciples of St. Theodosios was St. Evthymios, who later became Patriarch of Trnovo (1375-1393). His memory is honored by the Bulgarian Church on 20 January. At the Monastery of Kilifarevo, Evthymios was deemed worthy of a wondrous experience, which revealed the sanctity of his Spiritual Father and teacher St. Theodosios:

Once, he went for his customary evening visit to the cell of his Abba. But despite the fact that he recited the usual prayer [“Through the prayers of the Holy Fathers...”—Trans.] and knocked repeatedly at the door, there was no answer. Then from a window he saw a marvelous and otherworldly sight: St. Theodosios was at prayer in his cell with his hands and eyes raised to heaven, bathed from head to foot in a heavenly flame, which made him radiant, but without consuming him! He was all Light, all Heavenly Fire! Evthymios withdrew in trembling, glorifying God.

The next day, Evthymios found the Saint sitting outside his cell shedding bitter tears. He anxiously asked him the reason for his mourning, and the Saint revealed that God had made known to him the impending Turkish invasion of the region and the destruction of his monastery. The grievous events which followed soon after confirmed the clairvoyance of the Saint. At the end of the fourteenth century, the Turks destroyed the Monastery of Kilifarevo. It was rebuilt in 1596, only to undergo further destruction and to be built anew in 1718 and then later on again, in the nineteenth century. It exists to this day, but bereft of its original glory and grandeur. 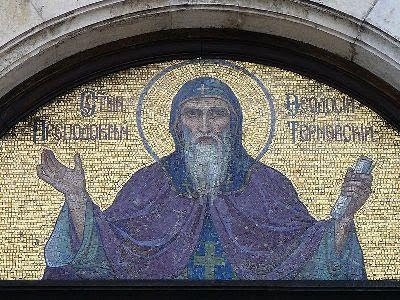 It is also worth mentioning that in the era of St. Theodosios, in the fourteenth century, a great struggle was waged for the purity of the Faith. A particularly dangerous heresy—one widely diffused throughout the region—was that of Bogomils. It consisted of a Slavic version of the combination of previous heresies: those of Manichæan Paulicianism and Messalianism. This frightful, twofold heresy, with its anti-social character, totally rejected the Church (the Hierarchy, the Mysteries, and the veneration of Saints) and the structure of society (marriage, political and legislative authority and organization, etc).

The Bulgarian Church decisively battled against the heresy of the Bogomils in the Synods of 1350 and 1359. St. Theodosios was present at these Synods, and by the power of the Holy Spirit and of his oratory, he refuted the untenable doctrines of the heretics, which were condemned.

The Saint, despite his infirmities and his age, went to Constantinople together with four of his faithful disciples, including Evthymios, in order to meet and converse with his old and beloved confrere and co-ascetic Callistos—who had also been a disciple of St. Gregory of Sinai and was now Patriarch of Constantinople—, for his spiritual benefit.

Interestingly enough, the Holy Patriarch Callistos I was also the biographer of St. Theodosios, though his lengthy Life of the Saint has been preserved to our day only in a Slavonic translation.

The Holy Patriarch Callistos granted the Saint a cell in the Monastery of St. Mamas. There, Saint Theodosios had a presentiment of his end. He partook of the Immaculate Mysteries, and the entire room was filled with a fragrance. On seeing the “army of the Heavenly King” coming to meet him, he gave up his holy soul to our Lord Jesus Christ, of Whom he had been such a faithful and exemplary servant. This took place on 27 November 1363. The Saint was buried in an honorable manner, as befits a Saint, and Angelic hymnody was heard at his gravesite. He has been interceding ever since for the peace of the world, the good estate of the holy Churches of God, and the salvation of us all.
Posted by Father David Bird O.S.B. at 01:42