A New Grammar for the Year of Faith

It is the grammar that has in Jesus son of God and son of man its ultimate and definitive center. This "mystical" dimension of Christianity is also the heart of Vatican Council II. A theologian from New York takes part in the discussion opened by www.chiesa 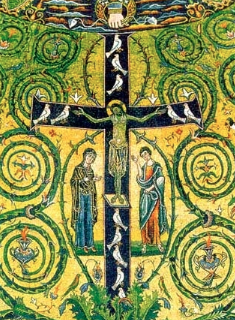 my source: newsletter by Sandro Magister

I find myself in considerable agreement with Francesco Arzillo’s reflections in the previous article from www.chiesa:

> How to read the new "signs of the times"

“This grammar of the human constitutes the trunk upon which one can graft the proclamation of faith in a fruitful manner.”

I agree. And I utter a hearty “Amen” when he adds:

“It is not a coincidence that in the pontificate of Benedict XVI the defense of this grammar and the proclamation of a faith purified and brought back to its spiritual foundation clearly coexist and find expression in the extraordinary homilies that precisely for this reason resemble the homilies of the Fathers of the Church.”

But I would like to offer a further reflection both about this “grammar” and about the challenge we face in receiving the full teaching of the Second Vatican Council.

In the documents of the Council and in the magisterium of Benedict XVI this “grammar of the human” is ultimately a Christological grammar. The human is only done justice to when read in the light of the revelation of the New Adam, Jesus Christ.

Hence, in my view, the Council’s deepest “ressourcement” was a re-Sourcement: a recovery of the Church’s and humanity’s foundational identity in Christ. This “return to Christ” is far deeper than the social moralism of the “progressives” or the invariant propositionalism of the “traditionalists.” Rather, it is the invitation to enter into a life-giving and life-changing relationship with the living Lord, Jesus Christ.

In this sense the Council descends to and recovers for the Church the “mystical” dimension of Christianity – not in some vague sense, devoid of content, but in the very concrete mysticism of personal and active participation in Christ’s Eucharistic and ecclesial body. This “Christ-mysticism” is already articulated in Paul’s Letter to the Galatians: “I have been crucified with Christ. It is no longer I who live, but Christ who lives in me. And the life I now live in the flesh, I live by faith in the Son of God, who loved me and gave himself for me” (Gal 2:19 and 20).

This mysticism is proclaimed in chapter one of "Lumen Gentium" on “The Mystery of the Church.” This first chapter is the too often neglected matrix of the subsequent chapters on the “People of God” and on the “Hierarchical Structure of the Church.” We can become so preoccupied and fixated upon the respective roles and responsibilities of lay people and ordained that we forget that we are only branches of the vine who is Christ. The Church, as chapter one of "Lumen Gentium" proclaims, is “sign or sacrament of unity” with God and all humankind only to the extent that it is “in Christ.” Otherwise it is a lifeless de-capitated body, detached from its Head.

In receiving the Council, then, it is imperative to appropriate the documents in a comprehensive way, with pride of place given to the four Constitutions. They must each be given their due, both in their entirety and in their connections with one another. Otherwise, we will fall into “a cafeteria conciliarism,” choosing only those aspects which accord with our pre-determined agenda.

However, in line with what I have said above, of the four Constitutions I suggest that "Dei Verbum" serves as “prima inter pares.” For, if God has not revealed himself fully in Christ, then there is no basis for either the Church’s doctrinal claims or its social teaching. Only in Christ do these take on compelling coherence, not as programs, but as a Way of life in ongoing and transformative relation with the living Lord.

In "Novo Millennio Ineunte," the magnificent Apostolic Letter written at the conclusion of the Great Jubilee Year 2000, Blessed John Paul II wrote: “We are certainly not seduced by the naïve expectation that, faced with the great challenges of our time, we shall find some magic formula. No, we shall not be saved by a formula but by a Person, and the assurance which he gives us: I am with you!”

Such is the conviction and the challenge posed by the Year of Faith which occurs not merely this year, but every year. That conviction and challenge is the ever new realization that “the Mystery is this: Christ in you, the hope of glory” (Col 1:27). This is the truly Good News we seek to share with all people.

Recently, I wrote about the powerful effect made by the images of the Pope during his visit to the States. I drew particular attention to his meeting with children suffering from disabilities and to his encounter with survivors and family members at Ground Zero. Indelible images for those who witnessed them.

But the challenge now before the Church in the United States is to ponder and take to heart the rich texts he has left us. Peter Nixon in his post, “Veritas,” (below) has insightfully initiated this meditation. Now Peter Steinfels, in today’s New York Times, offers his own reflection.

Steinfels’ thoughtful and  respectful column [1] requires careful reading. But here is his conclusion:

The lasting impact of Pope Benedict’s visit may hang on the answers to those two questions.

What I find myself pondering, however, is a third “crisis” which may actually underlie the two which Peter identifies. Call it “the Jesus crisis.”

One cannot read a homily or a pastoral address of the Holy Father without sensing that the proclamation of Jesus as “Lord and Messiah” is the very heart of his message. Let one example, from his address [2] in Washington to the Representatives of other religions, suffice:

Confronted with these deeper questions concerning the origin and destiny of mankind, Christianity proposes Jesus of Nazareth. He, we believe, is the eternal Logos who became flesh in order to reconcile man to God and reveal the underlying reason of all things. It is he whom we bring to the forum of interreligious dialogue. The ardent desire to follow in his footsteps spurs Christians to open their minds and hearts in dialogue.

But Benedict does not merely bear witness to this. He, in season and out of season, invites Christians to enter into ever-deeper relation with their Savior. Again, but one example — from his address [3] to young people at St. Joseph’s Seminary, Dunwoodie:

Dear friends, truth is not an imposition. Nor is it simply a set of rules. It is a discovery of the One who never fails us; the One whom we can always trust. In seeking truth we come to live by belief because ultimately truth is a person: Jesus Christ. That is why authentic freedom is not an opting out. It is an opting in; nothing less than letting go of self and allowing oneself to be drawn into Christ’s very being for others.

We can argue ceaselessly about why there is something rather than nothing or about the ultimate foundation for human rights. We can passionately debate structural reform in the Church. But in the quiet hours of early morning or late night do we not ultimately wrestle with the question: do I love him?

In the New Testament, a rich, but sometimes neglected text is the First Letter of Peter. We are, of course, reading it during this Easter Season at Sunday Eucharist. Peter joyfully exults in the faith of his (newly baptized?) hearers: “Without having seen him, you love him!” (1 Pet 1:8).

Is Peter’s successor posing this to us as a question: “Without having seen him, do you love him?”


Robert Imbelli is a priest of the archdiocese of New York, a professor of theology at Boston College, and the author of articles and commentaries for "Commonweal" and “L'Osservatore Romano.”